Rosetta, the Comet, and the Science of Surprise 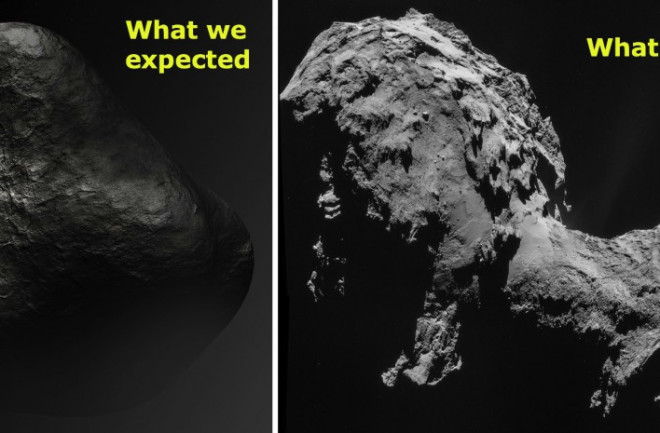 Comet 67P looks little like the illustration created by the European Space Agency before Rosetta's arrival. Reality is far stranger. (Credit: ESA–C. Carreau/Rosetta-Navcam) There is a cliche you hear all the time when scientists describe their experiments: "We expect the unexpected," or its jokier cousin, "If we knew what we were doing it wouldn't be called research." (That second one is often, but dubiously, attributed to Albert Einstein.) But like many cliches, this one is built on a foundation of truth--as the comet explorations by the Rosetta spacecraft and Philae lander keep reminding us. The latest shocks come from the huge batch of science results released last week, but the Rosetta mission has been a series of surprises going all the way back to its origins. And with another 11 months of exploring to go (the nominal mission runs to December 31) , it is safe to say that the surprises are far from over. Comet 67P/Gerisimayev-Churisamenko is not what we expected, the landing was not what we expected, and even the spacecraft itself is not what its designers intended. You can read a nice summary of the brand new Rosetta results here, but those specific findings only begin to capture the story. Sorry, No Nuclear-Powered Comet Delivery Some of the surprises surrounding the mission have been ones of human capriciousness. Rosetta's origins go back--way back--to a May, 1985 meeting of the European Space Agency which laid out the agency's "Horizon 2000" plan. A key component was a wildly ambitious plan to visit a comet, collect samples, and bring them back to Earth. The probe was intended to be nuclear powered--essential for carrying out its complicated goals--and developed jointly with NASA. The comet nucleus sample return mission was to be built on an architecture similar to that of NASA's planned Cassini mission, along with a related U.S. mission called the Comet Rendezvous/Asteroid Flyby (CRAF). Things didn't work out that way, of course. During early-1990s budget cuts, NASA was forced to cancel CRAF and pull out of the Rosetta project, transforming it into a smaller, solar-powered mission that would no longer bring back samples. Version 2 of Rosetta included two landers, one of them a joint French-U.S. design. Further NASA cutbacks led to the cancellation of the second lander, leaving the final Rosetta-Philae mission that actually flew. Human circumstance intruded another way: Rosetta was supposed to visit a different, slightly smaller comet named Comet 46P/Wirtanen, but the failure of a previous Ariane rocket delayed the launch, forcing the ESA to pick a new target: Comet67P/Gerisimayev-Churisamenko (often called just Comet 67P, to save keystrokes and public embarrassment when spoken aloud).

As originally conceived, Rosetta was a nuclear powered robot that would land, collect samples, and return them to Earth. Then budgets intervened. (Credit: ESA-ATG/Rosetta-Navcam) This is Not the Comet We Were Looking For Next came the big surprise of the comet itself. Preliminary studies of Comet 67P from Earth suggested it was a vaguely arrow-shaped object, as seen in the early scientific illustration above. As Rosetta closed in on its target last July it quickly became clear that those crude studies completely missed the comet's true form: the now-famous "rubber duck," composed of two objects that perhaps formed separately and fused or reassembled after the original parent body was blasted apart. The complex shape makes the comet much more geologically interesting, but also much more challenging to explore. From there came the many surprises of trying to place the Philae lander on the surface of Comet 67P. Any time engineers attempt to solve a completely new problem, there's a decent chance things won't work right the first time. That's a big part of what makes these kinds of space missions so productive; tackling extremely difficult challenges is exactly when engineers are forced to be most clever and innovative. Philae had two systems designed to secure it to the comet despite the extremely feeble local gravity: a system of downward thrusters to push it toward the ground, and harpoons to keep in anchored. For reasons that are still under investigation, both systems failed. The surprises blossomed from there. Philae rebounded off the comet in three slow-motion bounces, moving no faster than a moderate human walking pace. Rosetta, watching above, witnessed the first rebound but did not record Rosetta's landing place; Rosetta team members have given up trying to spot it from orbit, although they have identified its approximate location. Phillae tripped on something--perhaps the rim of a crater--on its second rebound and went into a spin. It landed in some kind of pit or ravine, where its solar panels received only 1.5 hours of sunlight a day, too little to keep its batteries charged.

Scientific illustrations of Comet 67P's surface, made before the Philae landing, were just educated guesses. Rather wrong ones, as it turned out. (Credit: ESA-ATG/Philae-CIVA) Mission planners were ready for worst-case scenarios so they designed Philae to perform its key science experiments in the first 54 hours of landing while it was running on reserve battery power. (Put another way--they were prepared for surprises.) Preliminary results indicate that the comet is much harder than anticipated (surprise). Philae's landing site seems to be covered with several centimeters of ash-like cometary dust (surprise). Those just-released science results from Rosetta are also full of head-scratchers. The composition of the comet's ice implies that comets like 67P could not have provided Earth with the water that filled its oceans billions of years ago (surprise). There is almost no detectable ice on the surface yet the comet is shedding considerable water from somewhere just below. Comet 67P's surface is marked with smoking pits, ripples and dunes that look like they were sculpted by wind, sagging depressions, giant boulders, and long fractures. Some of the dust "grains" flying off the comet are actually human-size chunks two meters (six feet) wide. Surprise, surprise, surprise. The Rosetta Party is Just Getting Started Keep in mind, almost all of the Rosetta science we've heard about so far come from just the first month of observations. Much of the data collected by Philae is still being analyzed as well. Moreover, the most interesting part of the journey still lies ahead. Rosetta will keep following the comet and watching as it moves closer to the sun and warms up. Comet 67P reaches perihelion (nearest point to the sun) on August 13. The latest images already show more dust and gas beginning to evaporate off the frozen surface. What will the landscape look like as the comet really begins to cook? Will we see parts of the comet disintegrate in real time? Who knows?

Rosetta is only about 1/3 the way through its primary mission, and the Philae lander may yet return for a second act. (Credit: ESA) And then there is the matter of Philae, which is not dead--just sleeping. Originally, mission planners hoped it might keep operating for several months but expected it would break down from overheating in the intensifying sunshine. Now it seems that the arrival of summertime on the comet might be the kiss that brings Philae back to life, by warming its batteries and increasing the amount of light reaching its solar panels. I'll be surprised if Philae doesn't wake up sometime later this year...and you know what? I'll undoubtedly be surprised by the things that it sees if it does. Surprise is why we explore and--cliche be damned--it is the one thing we can always rely on when we go.