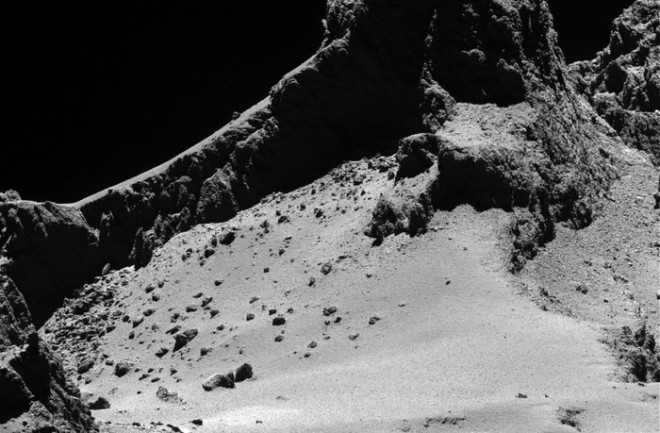 Comet 67P comes into clear view with new images and data from Rosetta. Credit: ESA/Rosetta/MPS for OSIRIS Team MPS/UPD/LAM/IAA/SSO/INTA/UPM/DASP/IDA After 10 years, 4 billion miles, and an Interstellar-style hibernation, the Rosetta spacecraft arrived in August at its final destination: Comet 67P/Churyumov-Gerasimenko. Engineers inserted Rosetta into orbit around the comet — a human first — and began taking measurements and mapping out landing spots for the intrepid Philae lander. Philae, once ejected, bounced twice, harpooned the comet’s surface, and came to rest in an unfortunately shady spot where it can’t recharge its solar batteries (RIP, although it’s “just sleeping”). The orbiter, though, has continued to collect information about and images of 67P. And today, scientists unveiled their first batch of new knowledge.

Made of Star Stuff

Rosetta’s images show the comet to have two lobes connected by a rocky “neck.” Some scientists call it a “rubber duck” shape, although it may have been too long since they’ve seen a rubber duck. It has boulders, pits, precipices, cliffs. It looks, in other words, primordial. And it is — all comets are. In the early solar system, there was only a proto-star and a disk of leftover gas and dust. Small chunks of this material crashed into one another and became large chunks, which crashed into other large chunks to become even larger chunks. As they grew in mass, they grew in gravitational force, and they attracted each other. The snowballing continued until we had a bunch of planets… and a bunch of also-rans, like comets. Comets, nearly unchanged since those early years, show us what the solar system was made of in its infancy. Their dusty crevices give clues about the first few chapters of the solar system’s story.

When scientists saw Rosetta’s shape, they asked a kindergarten question: How did it get that way? The two lobes (the “duck head” and the “duck body”) may have started as two separate objects that collided with each other and stuck. Or maybe 67P once had a more potato-y body, but its middle eroded away into an extreme waist. The larger “body” is 4.1 kilometers at its longest dimension, while the “head” is 2.6 km. But Rosetta’s OSIRIS instrument can make maps of the comet’s surface with 0.8-meter resolution (Google Earth shows features around 15 meters across) and take optical, infrared, and spectroscopic images (which show the comet’s composition). With its sharpness, OSIRIS allowed scientists to see that dust covers much of the surface, sometimes at depths of 5 meters (imagine stepping in that!). The nightmarishly thick dust blocks some of the sun’s radiation, meaning the ices under the comet’s surface don’t turn to gas all at once. The protective layer has helped 67P survive for so long. It’s not a static layer, though: The comet has wind! It blows the dust into ripply dunes and creates dust “ponds” in depressions up to 900 feet across. As a whole, the comet is less than half as dense as water. It’s 70-80 percent porous — meaning that around three-quarters of it is empty space, just like a rubber duck.

The dust-covered, cliff-carved rock rotates every 12.4 hours. As it approaches the sun, radiation heats up the volatile ices under the surface. They turn into gases, blasting through in powerful jets. Curiously, most of this explosive activity comes from the “neck” of the comet. Maybe it’s made of different stuff from the body and head — a different molecular variety of ice — or maybe its ice is closer to the surface. Rosetta scientists found that blown-off dust outweighs blown-out gas by four to one. Around the comet, water molecules are the most prominent gas, although carbon monoxide and dioxide are close behind. The balance between them fluctuates as the comet rotates and continues in its orbit. The variations seem to be both daily and “seasonal” (bet you’ve never thought about a comet’s seasons). In addition to the more ephemeral compounds, solid grains also surround the comet. Some of them are organic — aliphatic and aromatic compounds, carboxylic acids, alcohols. Organics like these form when radiation hits the comet’s ices or single-molecule ices mix together to form bigger molecules called polymers.

Jets are seen rising from the comet's surface in this November photo. Credit: ESA/Rosetta/MPS for OSIRIS Team MPS/UPD/LAM/IAA/SSO/INTA/UPM/DASP/IDA

67P has more organics than other comets of its kind — an important note for us living things who wouldn’t have gotten started without organic molecules. Comets just like 67P could have delivered to Earth the carbon-based molecules that eventually became us. And such comets tell us how long organic molecules have existed in the solar system: since before the sun was even a real star. Also available in that early era were water, methane, methanol, carbon dioxide, carbon monoxide — some of the ices Rosetta saw coming from 67P, and some of the same compounds we owe our lives and our world’s habitability to. We don’t really think of comets as worlds. But they are, and they’re the kind of worlds ours is made of. If we picture comets at all, we think of fuzzy streaks in the sky, or the majestic tails in images. But Rosetta has turned 67P into a place — one where winds blow and dust settles and you could do some wicked bouldering if you wouldn’t die when you fell into a 15-foot-deep pile of dust.