Ripples in Space Are Evidence of Universe's Early Growth Spurt 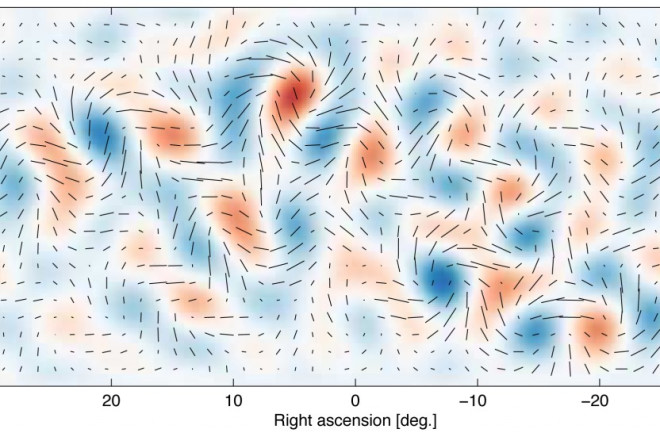 When the universe expanded tremendously after the Big Bang, the resulting gravity waves interacted with the cosmic microwave background to produce this characteristic "B-mode" pattern. Credit: BICEP2 Collaboration Big news in the cosmos today! Researchers from the BICEP2 south pole telescope have found ancient proof that the universe expanded tremendously after the Big Bang, a theory known as inflation. The discovery tells us (albeit indirectly) about an even earlier stage of the universe than we've ever before observed, and it provides crucial evidence that inflation did indeed occur. In so doing, it extends our model of the early universe from about one second after the Big Bang right back to less than 10^-37 seconds after the event — a stunning leap forward (or backward, as the case may be).

To understand this, let’s back up 13.8 billion years or so, to the Big Bang. Also known as the birth of the cosmos and the origins of time and space, this burst of everything set the universe in motion. But a few niggling issues cast some doubts on the Big Bang theory — one of which was the mystery of how the universe came to be so uniformly spread out. Enter the idea of inflation, in 1980, which suggested that just a few instants after the big moment, the universe suddenly grew enormously. This addition to the cosmic timeline explained why the universe was relatively uniform and it fit nicely with what we already knew about the universe's earliest moments. However, cosmologists had no direct proof of inflation. One way to prove inflation occurred, physicists thought, would be to look for gravitational waves created in its wake. These are basically ripples in the “fabric” of space-time — what the universe is made out of. Gravity is a relatively weak force, though, so we could only hope to detect the largest waves out there, caused by huge interactions like black holes colliding. Even though inflation was a relatively huge thing — it literally shaped the whole universe — the gravity waves it produced are now too weak to measure directly. So instead, researchers were looking for the effect of inflation’s gravity waves on light. And not just any light, but the cosmic microwave background, “echoes” of light leftover from the Big Bang’s energy, created when the universe was just 380,000 years old. When this light interacted with the gravity waves, the theories said, it would have produced a distinctive pattern, called the B mode, in the light’s polarization. Such a pattern would be direct evidence that the gravity waves caused by inflation were real, and thus a key proof of inflation. And today, scientists announced they'd found it.

But that’s not all!

Assuming the finding is confirmed (and that looks likely — the team apparently spent 3 years going over their own data to make sure it was sound before coming forward with it), that’s huge news for cosmology. Direct evidence for inflation has been sought after for decades. Naturequotes Alan Guth, the main “inventor” of inflation, as saying, “This is a totally new, independent piece of cosmological evidence that the inflationary picture fits together,” and adding that the findings are “definitely” Nobel prize-worthy. But it’s also big news for a couple of other reasons. First, in addition to being the first evidence for inflation, it’s also the first direct evidence for gravitational waves. Even though some observatories have been (and will continue!) looking for these gravitational waves, they're still incredibly hard to find. The more data we have on these weird, space-time warping ripples, the more we'll be able to understand the universe itself, and this is a great step in that direction.  And the other bit of significance to this has to do with understanding gravity in the first place. It’s currently the only one of the four fundamental forces not to play nice with quantum mechanics, which explains how things work on the tiniest scales. At high temperatures (like those found shortly after the Big Bang), the other three even begin to unify into a single super-force. One of the biggest issues in physics today is figuring out how (or if) gravity fits into this picture, and the findings that gravitational waves can result from inflation, a fundamentally quantum phenomenon, suggests that quantum gravity might indeed be possible. A glimpse into the very first milliseconds of our universe, plus bigger questions ahead — all in all, it's a pretty good day for science.