Right or Left: Human Handedness Is An Ancient Trait

New evidence shows that right-handed dominance is age-old, and that handedness might not even originate in the brain. 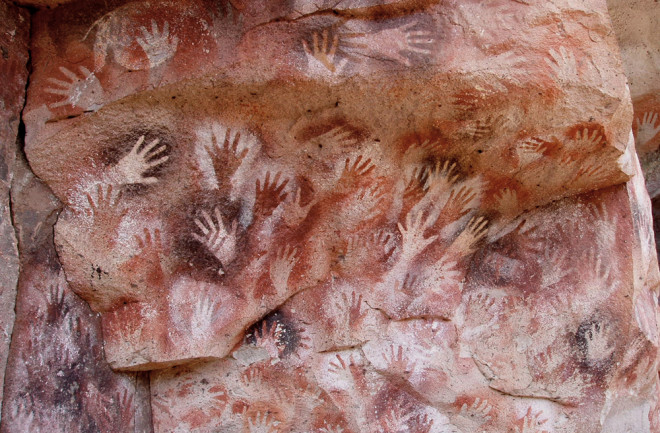 Recent research has shown that handedness and language do not, er, go hand in hand, at least in the way we once thought. Marianocecowski via wikimedia

Much of what defines us as a species is all in our heads.

First and foremost, we’ve got these big, powerful brains, and small faces tucked underneath a skull that expanded to house our most precious organ.

There’s another trait that researchers once assumed was a Homo sapiens hallmark, based in the brain but most obvious in the upper limbs: Nine out of 10 humans are considered right-handed.

“It doesn’t matter where you find them, humans have that ratio,” says retired University of Kansas anthropologist David Frayer. Across history and geography, our species has shown remarkable consistency. And no other species appeared so strongly biased toward right-handedness.

The trait’s emergence in our species alone, the thinking went, was yet another indication of our superiority, a preference controlled by the brain and directly linked to our capacity for language and tool-making.

As researchers have refined methods and unearthed new evidence, it seems much of what we thought we knew about handedness was anything but right.

Fossils reveal that right-handedness goes much further back in our evolutionary story than once believed. Recent research has shown that handedness and language do not, er, go hand in hand, at least in the way we once thought. And in 2017, neuroscientists suggested that the origin of handedness is not even in the brain.

The fossil record of hominins — humans, our ancestors and closest evolutionary kin going back to the split from other primates about 7 million years ago — is mostly fragmentary, making it impossible to determine handedness by studying limb bones.

In the 1980s, researchers analyzed stone tools, trying to gauge hand dominance from the direction the material was flaked, or chipped. While initially promising, the idea proved unreliable.

Then, Frayer began to look at striations on Neanderthal teeth. These furrows appeared only on the outer faces of mostly the upper teeth, at the front of the mouth. One direction of diagonal marks, either from upper right to lower left or upper left to lower right, would dominate.

Individuals working with tough, fibrous material, Frayer reasoned, could have held it between their teeth and one hand, then used an edged stone tool to saw off a small piece with the other hand. Every now and then, the tool edge would hit (ouch) the outer face of the upper teeth.

The angle of tool-on-tooth contact could tell researchers whether the individual was holding the tool in the right or left hand. And “one of the nice things about looking at the scratches,” says Frayer, “is that you just have to have a single tooth.”

Frayer and his colleagues have been able to analyze samples from across our genus. The oldest specimen, 1.8 million years old from Tanzania, belonged to H. habilis: the earliest member of the genus Homo and at least four times older than our own species.

In December, Frayer’s team published a study in Evolutionary Anthropology that confirmed finding the same 9-1 ratio of handedness across the hominin fossil record as in modern human populations. It destroyed the idea that H. sapiens is uniquely right-handed.

Two Sides To Every Task

You know where you can find a pile of left-handers? Certain species of kangaroo. Recent research on a number of animals nixed the earlier notion that only humans have a species-wide bias toward handedness.

Among chimps and other apes, however, handedness appears to vary based on the method of evaluation. Comparing humans and other species can be especially problematic: While researchers typically determine handedness in humans through self-reported surveys (“which hand do you write with,” for example), they often use observation of general behavior for other species.

“When we ask humans about hand dominance, we ask about tool use rather than, say, hugging or picking your nose,” says Gillian Forrester. As a comparative psychologist at Birkbeck, University of London, she studies both the evolutionary and developmental pathways to behaviors such as handedness. Forrester believes that the differences between testing methods across species may make humans appear more biased toward general right-handedness, beyond tool use, than we actually are.

“Humans have more objects and are doing more object-driven things,” Forrester says. “If we narrow down hand dominance in apes to tool use . . . we find apes are certainly significantly right-handed for tool use.”

In fact, animals as different as chickens and fish show preferences, if not for handedness per se, then for favoring the use of a particular side of the body for a particular task.

“Motor biases are seen throughout the animal world, all the way back to 500 million years ago and the emergence of vertebrates, and possibly even older than that,” says Forrester.

Researchers can determine handedness in hominins by the dominant direction of teeth striations from individual fossil remains going back as far as Homo habilis, the first member of our genus. Drawing: Jay Smith. Photos: David Frayer and Luca Bondioli

Favoring one side of a symmetrical body over the other for a particular task is linked to cerebral lateralization: Essentially, the left and right hemispheres of the brain divvy up processes for greater efficiency. Most researchers believe that lateralization explains how handedness arises, including our consistent 9-1 right-handedness ratio.

Stout, who studies the evolution of cognition and tool-making, cautions that terms such as “right-handed” may oversimplify the complex processes made possible through lateralization.

“It’s not like the right hand does everything and the left hand does nothing,” Stout says. “It’s not so much that we’re right-handed as that we have a characteristic division of labor between the hands.”

The right hand may do much of the more noticeable work, such as writing or cutting up food, but the left hand is just as busy, often providing stability.

Not In Your Right Mind

Southpaws, if you’re wondering how you and other lefties fit into this evolutionary picture, so are researchers.

Once thought to be an aberration potentially caused by brain damage at birth, left-handedness may be more benign. Says Frayer: “I don’t think it’s a pathology. It’s part of a normal variation.”

And what does it mean to your brain to be left-handed? Maybe not as much as researchers once thought.

You’ve probably heard the saying, “Since the right side of the brain controls the left side of the body, only lefties are in their right mind.” Nope. We now know that handedness is not so closely correlated with how the brain’s hemispheres divide tasks.

“A lot of people think, ‘If I’m left-handed, my brain is reversed,’ ” says Forrester. “But 70 percent of left-handers are identical in organization to right-handers.”

And although “there’s an evolutionary-genetic component to it,” Stout says, “even the people who study the genetic basis of handedness don’t really know how it happens.”

Forget headlines about finding “the left-handed gene.” Science has not reached a consensus about the role DNA plays in handedness — or even that it originates in the brain. Last year, one team concluded that handedness actually arises in the spinal cord.

Previous research has shown that human embryos demonstrate a preference for moving the left or right hand as early as 8 weeks. Writing in the journal eLife in 2017, neuroscientists found that this preference appears to be seated in the spinal cord, which, at that developmental stage, is not even connected to the motor cortex, the brain’s movement control center.

The team found that these early signs of handedness appear to be linked to lopsided epigenetic activity: chemical changes that effectively turn certain genes on or off without altering the DNA sequence itself. The research is preliminary, however, and scientists have not identified what causes these epigenetic changes.

Regardless of how 10 percent of us become left-handers, that minority has historically faced a range of superstitions and worse. Left-handedness has been falsely linked to evil, perversion and criminality.

“People see this difference and think it must mean something. We’re always trying to understand, and to suppress, difference,” says Howard Kushner, a historian of science and medicine.

Kushner’s 2017 book, On the Other Hand: Left Hand, Right Brain, Mental Disorder, and History, explores how studies associating left-handedness with a variety of mental conditions often fall apart under closer scrutiny. But as the scientific view of left-handedness as a pathology has lost momentum, so too have claims that left-handers are, on average, more creative or more intelligent.

That said, says Kushner, “I hang around a lot of smart people, and the number of left-handers is always more than one would assume. It may have to do with resilience.”

A lifetime of being seen as different — and dealing with such indignities as right-handed scissors — may make southpaws more adaptive, though we have yet to turn up hard evidence.

Frayer notes that even with nearly 2 million years of hominin handedness in the fossil record, uncertainty about its causes and consequences remains: “The key thing is that we know right-handedness is commonly found in all populations [of our species] and that it differs from what we find in chimps. To go any further is risky.”