With a swarm of determined zerglings, a Brood War is currently underway on the East coast. Brood II, a cohort of slumbering cicadas, recently made their way out of the ground in the billions to outnumber the humans in their path 600 to 1 (but don't be surprised if you don't see any). Even more amazing than their numbers is how long the cicadas have waited to emerge. Every 13 or 17 years—depending on the brood, of which there are 15—they flood the trees, shrubbery, and streets with deafening sex sonatas. The cicadas have waited nearly two decades for a few weeks of procreation. 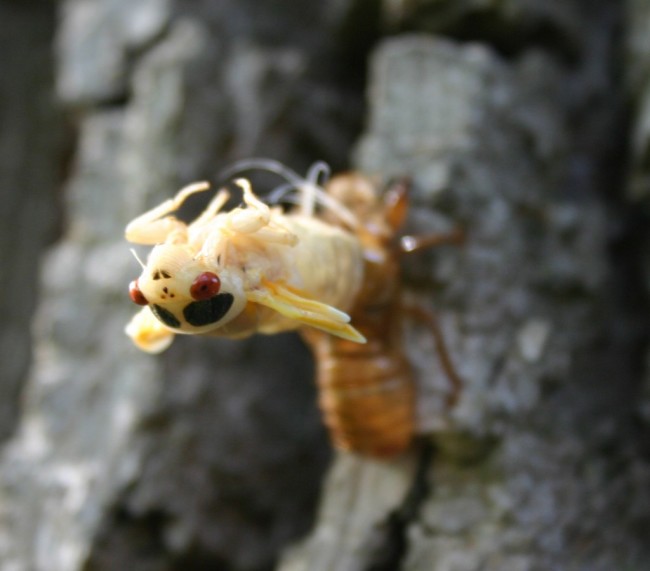 Cicadas are at the heart of an evolutionary mystery going strong for the last 350 years: why do cicadas emerge at prime-numbered times as opposed to other times? Scientists are still hard at work on the question. Some researchers think the cicadas' long cycles reduce competition among broods, others think it helps them avoid predators. Still more think the cicadas’ cycles help control bird populations—some of their primary predators. Evolutionarily, the cicada is amazing in the true sense of the word. What is less amazing is ending this conversation here, attributing the rest to the supernatural. In an article published in late May, Brian Thomas, a science writer at the Institute for Creation Research (ICR), also notes the many amazing adaptations of this big-eyed bug. But for Thomas, the mystery is solved. Like how astronomers picking up a prime-numbered signal directed at us would think of an extraterrestrial intelligence, Thomas knows that the cicadas’ prime-numbered life cycle signifies a divine intelligence. He writes:

Magicicada broods spend either 17 or 13 years living underground, and both are prime numbers…Having to attribute these insects' "amazing accomplishments" to mere natural processes must frustrate otherwise extremely smart secular scientists. Satisfaction, not frustration, awaits those who ascribe genius insect math to a real live Mathematician. "For by him were all things created, that are in heaven, and that are in earth" (Colossians 1:16.)

The cicada is a rainbow--says the creationist perspective--let's just leave it at that. It's true, the cicada’s odd life cycle is a rainbow that scientists want to unweave, but not to reduce it. On the contrary, we want to find even more beauty. Put through the prism of science, a number of theories about the mysterious bug, like different hues of light, have shimmered against lab benches all over the world. And all of them are in the realm of the real, nothing supernatural required. Cicadas aren’t the only mathematical marvels we know of. Flowers, cacti, and pinecones all exhibit amazing complexity along with mathematical beauty. Buds of the sunflower, for example, radiate out from the center according to the famous Fibonacci sequence. It allows the flower to pack as many buds as possible into a small space, thus maximizing its reproductive chances. And the “genius” of the cicadas’ internal thermometers that Thomas attributes to God—of the Bible I presume, not any other deity in the pantheon of possible beliefs—isn’t so divinely inspired either. Crocodile embryos, for example, straddle a thin line of two degrees determining the sex of the tiny reptile. The “genius” that Thomas quotes suggests a thinking animal and a brilliant creator. But this just happens to be a shorthand way of talking about the organisms that we study, even though most of them are not sentient in the way humans are. Anthropomorphizing like we all do, one of the scientists that Thomas quotes in his article described the cicadas as “geniuses,” and Thomas latched onto it. However, we know that cicadas, and other mathematical wonders in the animal kingdom, aren’t geniuses in the way we use the word to describe Einstein or Leibnitz. When scientists talk this way, they are extolling the cleverness of nature: how the selective pressures of the world can mold genetic clay into art worthy of replication. To quote evolutionary biologist Leslie Orgel, “Evolution is cleverer than you are.” If a process or adaptation seems too smart for nature, that’s a failure of your imagination, not the hand of God. I can make that claim because we have a working model of life’s morphing and molding without it. There’s a mountain of evidence to show how life climbs Mt. Improbable by slow scaling instead of giant, otherworldly leaps. In contrast, Thomas has a Bible verse and a prayer. Creationism ( or "intelligent design") seeks to re-weave the rainbow that science unraveled. Any ongoing mysteries in science should be re-bundled in the fibers of mysticism, to be gawked at with passive imagination. Instead of digging deeper into the conundrum of the cicadas' life cycle, creation “research” already has the answer. Secular scientists are on a fool’s errand, apparently. It is as though nature is a wonderful symphony that science sits in awe of. It looks closely at each player, how the tubas are tuned and how the strings are strung. Creationism lets out a loud "shush" at such excitement. Just enjoy the show and stop asking questions. A rainbow is amazingly complex. Rays of light illuminate consecutive curtains of water droplets, each directing a different part of the ROYGBIV spectrum towards your eye. The unweaving yields more beauty than the color and shape alone. Geometry, physics, optics, and a bit of luck may unweave the rainbow, but closed-mindedness and dogma puts it back together. I’m eager to read about how the entomologists of the future figure out the reasons for the cicada’s long and oddly-timed life. We might not even find out for decades. After all, it’s hard to study something that only surfaces maybe twice in a scientist's career. Whatever the answer is, it will probably be cleverer than I can imagine. But after all the empiricism is over, the answer will no doubt be exactly as clever as creationism will retroactively claim it to be. ---

This post was originally published at Randi.org (now edited)