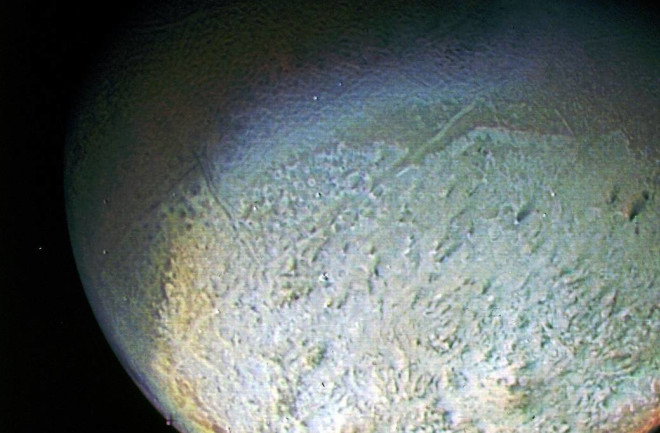 Triton, Neptune's largest moon, has frost that travels seasonally northward from its south pole, new observations confirm. (Credit: NASA/JPL) Neptune’s largest moon Triton is still gathering frost on its surface – even after nearly 20 years of accumulation. Backed by new observations, researchers recently announced that frost continues to travel northward from the southern polar cap of Triton. The frost, which is generated by the sun heating and sublimating volatile material before it travels northward, has been observed since the turn of the century. However, the new findings help shed light on how Triton’s frost budget varies over the world’s full season, which lasts 84 years. The research, which was presented at a press conference for the Division for Planetary Sciences of the American Astronomical Society 50th annual meeting, used ground-based observations to bolster Triton data gathered by the Voyager 2 spacecraft in 1989. According to Bonnie Buratti – a planetary astronomer at NASA’s Jet Propulsion Laboratory and lead author of the new study – spacecraft flybys, like Voyager 2, gather data from a single point in time, which can be enormously valuable. However, ground-based observations, like this team made, can create a larger picture of what’s happening on Triton. The research team, which included a group of students, worked “to search for continued volatile transport on the moon since Voyager,” Buratti said in an email. By using the 24-inch telescope at the JPL Table Mountain Observatory (TMO), located in Wrightwood, California, Buratti and her team collected data over the course of 20 nights in 2016. With these new observations, the researchers not only showed that frost is continuing to accumulate on Triton, but also confirmed previous Hubble Space Telescope observations that showed the increase in frost is causing regions of Triton to slowly brighten over time. By understanding the exact causes and consequences of seasonal variations on Triton, researchers hope to create better models than can more accurately prediction the global frost budget on other worlds. Many questions still remain about Triton, like “is it an ocean world? What is its interior like? Is there a Northern polar cap? How does its atmosphere vary?” Buratti said. To investigate these mysteries, the team will continue ground-based observations to further explore the strange, distant world. Furthermore, Buratti said, there might even be a separate mission to return to Triton and make flyby observations, which would give us an up-close-and-personal view of the icy moon’s surface.