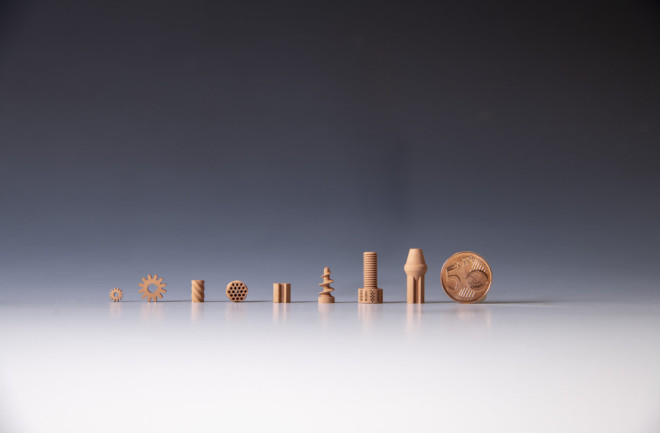 A Future on the Moon

To support a potential, future lunar base, researchers at the European Space Agency (ESA) have 3D-printed and baked fake moon dust into screws, gears, and even a coin.

Both private and government space agencies have expressed serious intentions and started developing plans to build a human-inhabited base on the moon. But it takes a lot of fuel, cargo capacity, and money to launch things into space and land them on the moon. And building a lunar base from scratch will take a lot of materials. So, it would be extremely expensive to bring all of these parts from Earth to the moon, especially since repairs would require backup pieces.

This is why researchers are investigating a more sustainable option. Instead of bringing things with, we could just make them there using moon dust, or regolith, as fodder for a 3D printer. This way, they could cheaply and easily create building materials on the moon itself. To practice, the ESA team 3D-printed items including screws and gears with fake moon dust. Though its properties differ from Earthly soil, lunar regolith isn’t too difficult to simulate, and the silicon, aluminum, calcium and iron oxides present can be formed into usable shapes.

How to 3D-Print With Moon Dust

To 3D-print with fake moon-dust, the team started with the human-made regolith. The dust was then ground down to particle size, and the resulting grains were mixed with a binding agent that reacts to light. A 3D printer then laid the mixture down in layers until the desired object took shape. The item was then exposed to light so it could harden, and baked in an oven to fully solidify it.

The finished product is like a piece of moon-dust ceramic, ESA says in a statement. These initial pieces have proven that it’s likely possible to print with actual lunar regolith on a moon base, and they’re part of the larger URBAN project examining how 3D printing could support lunar colonization.

“If one needs to print tools or machinery parts to replace broken parts on a lunar base, precision in the dimensions and shape of the printed items will be vital,” ESA materials engineer Advenit Makaya said in the statement.

This will be a critical advantage for future moon-bound missions. Especially for projected extended stays on the moon, things are bound to break or go wrong. If a single screw is lost or broken, the crew might not have extra screws in the exact shape and size needed. By creating the exact piece required using the regolith that surrounds them, the crew would be able to sustainably maintain repairs on a lunar base.