The pandemic has not sparked a shocking rise in UFO sightings, experts say. But the public is growing increasingly confused by ordinary objects they see in the sky. 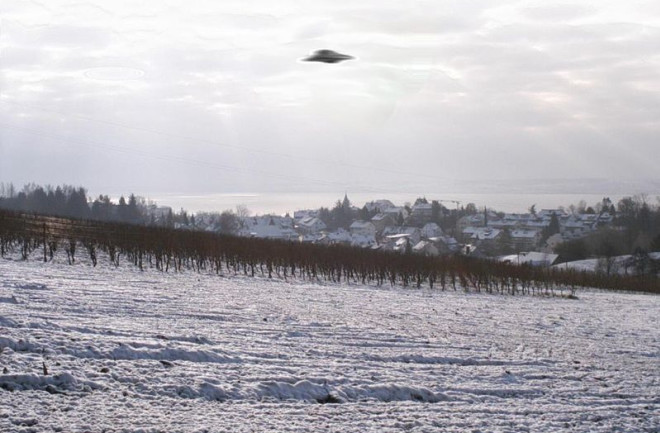 A homemade picture of a UFO. (Credit: Wikimedia Commons)

This year, humanity has been forced to spend agonizing amounts of time cooped up at home. We’re upset. We’re bored. And we’re getting stir crazy. But has that translated into more people seeing unidentified flying objects? A surge of news stories have suggested that UFO sightings are on the rise around the world, with world-weary skyglancers reporting a growing number of alien encounters from Belgium to New York City.

However, not even so-called UFOlogists are really buying it, as the evidence for such claims is surprisingly weak. One website, the National UFO Reporting Center, noted a spike in sightings back in spring as the Pentagon released its juicy UFO tapes. But another popular reporting database, Mutual UFO Network, saw no such trend.

In fact, sightings have generally dropped in recent years, even as UFO investigators say they’re seeing an increasing number of people reporting easily identifiable objects. From blurry bugs to airplanes, from bright planets to Starlink satellites, cell phone-wielding observers have become increasingly confused by what's in the night sky.

“You wouldn't believe some of the photographs people send us,” says Steve Hudgeons, international director of investigations at the Mutual UFO Network. “People who don't know what they’re looking at will send us a picture that they think is the holy grail, and it's simply an airplane.”

The Mutual UFO Network, or MUFON, is among the biggest and oldest groups of its kind. Their well-trained volunteers have been collecting UFO sightings — and investigating them in detail — for more than 50 years. They've also served as a central reporting database for UFO sightings since 1969.

Along the way, MUFON has investigated some truly bizarre cases, like a 2008 incident in Stephenville, Texas, where dozens of reliable witnesses claim they saw a UFO as big as a Walmart.

So, if there really was some massive surge in UFO sightings in recent years, MUFON would be among the first to know about it. However, the group says they’re really not seeing a dramatic uptick in UFO sightings. There were about 3,800 cases reported between January and late September of this year, which is a roughly 20 percent increase compared to 2019. But they say that level of annual variation is normal for their dataset. And, in fact, reported cases have mostly been declining in recent years.

“It's not really that alarming. It fluctuates a lot,” says Hudgeons, who admits to fielding many questions about the subject this year. “I wouldn't say there’s a large increase at all.”

However, most of the news stories written about the rise in sightings have taken their numbers from another online reporting site called the National UFO Reporting Center. Like MUFON, they’ve been collecting accounts of UFO sightings for nearly half a century, largely through a phone hotline and, in recent decades, an online form.

Back in April, they received more than twice as many reports compared to the same month the prior year. But those numbers happened at the height of lockdowns, at the same time a sensational news story was published in The New York Times that revealed previously classified footage of UFOs captured by American fighter pilots. But soon after, their reported sightings returned back to 2019 levels — which were significantly less than they were just 5 to 10 years ago.

Yet the stories about a recent spike in UFO sightings continue to be published.

Back in August, The Cut, an online vertical of New York magazine, wrote about how UFO sightings, specifically in Belgium and Canada, were on the rise. And in September, a headline in The Wall Street Journal declared that “UFO Spotting has Replaced Birdwatching as Pandemic Obsession.” It’s a “banner year for close encounters,” the paper reported. Later in the month, Patch.com, a website with hubs for local news, suggested “Alien Invasion Latest 2020 Threat as UFO Sightings Shoot Up in NY.” What was their evidence for this “huge increase” in sightings? Reported cases from New York grew from 151 in 2019 to 184 in 2020.

Since the pandemic started, similar stories have cropped up about rising numbers of strange objects seen in the skies over Pennsylvania, Michigan, Virginia, New York, and more.

Very few of these cases involve people seeing things that might surprise the average (or even beginner) skygazer. That, he explains, has been the defining trend in recent years.

Around 2012, Hudgeons says that MUFON started to notice a sharp rise in the percentage of reported UFO sightings that their investigators consider obviously identifiable. That’s not to say every case involves a confused skygazer or a hoax. But, Hudgeons says, the truly interesting stuff is few and far between. (Despite easily identifying many supposedly unidentifiable objects, Hudgeons says there are a few cases each year that intrigue MUFON’s investigators enough to go into the field and do X-files-style detective work.)

Seth Shostak is senior astronomer at the SETI Institute, and an audience favorite as the voice of reason on many popular UFO programs. He adds that if you look at reported UFO cases, there was an increase around 2012, and then about five years ago, sightings peaked and started to drop off. “It could be that the aliens have lost interest in Earth,” he jokingly says. “Maybe they’re afraid of the virus.”

Nonetheless, the astronomer still regularly gets emails from people convinced that they’ve found evidence that aliens are real. But when Shostak looks at most of the pictures, he immediately realizes they are showing airplanes or other obvious objects.

Part of the reason for the confusion, he says, is that most photos are now taken on cell phones, which don't have a mechanical shutter. That can cause image artifacts like smearing moving objects in one direction. Birds become cigar-shaped alien craft. Bugs become hypersonic UFOs because people don’t realize it flew right in front of the camera lens.

“When it comes to aliens, I think a lot of people are very interested, and I think that’s hardwired to us,” Shostak says. After all, keeping an eye out for foreign creatures was vital to the safety of ancient peoples. “If you weren't interested in aliens hundreds of thousands of years ago," he says, "someone would come over the savanna and take your land.”

A couple from McMinnville, Oregon, took this photo of a supposed UFO back in 1950, and it was reported by major news outlets. A later analysis suggested the picture actually captured an object hanging from a wire. (Credit: Wikimedia Commons)

Why Do People See UFOs?

Experts say there are two main types of people who see UFOs: dog walkers and smokers. Why? “They’re outside the most,” Hudgeons says.

“There are a lot of people who genuinely see things that they can't explain, but that doesn't mean that they’re inexplicable,” says Sarah Scoles, author of They’re Already Here: UFO Culture and Why We See Saucers. “If somebody didn't know about Starlink satellites, they’d be freaked out.” (MUFON received many pictures of Elon Musk’s low-orbiting satellite constellations that aim to provide global internet coverage.)

And the logic behind why UFO sightings might rise in 2020 isn’t totally without merit, either. If you assume more people are at home with time to skygaze in their backyards, it makes sense that some would see strange things. Scoles also says that UFO sightings have historically tended to increase during times of peril.

For example, if you believe the History Channel, UFO sightings seem to crop up during the biggest moments in history, including their initial rise to fame at the height of the Cold War. UFO believers like to think that aliens chose now to visit because current times are so interesting. And from a psychology standpoint, Scoles says it could also be related to a natural human desire to project our concerns and anxieties onto something else, specifically something that is completely out of our control.

However, there’s also another potential explanation for why stories about UFOs take off in the news. The media knows people love UFO stories, and reporters can’t resist the urge to jump on the bandwagon.

In fact, if there’s one constant in UFO sightings, it’s that media coverage tends to be the tail that wags the dog. From Roswell, New Mexico, to McMinnville, Oregon, breathless coverage from reporters has historically fueled the most lasting UFO mythologies.

Time hasn't changed the media’s instincts, either. In 2019, news outlets gave abundant ink to an event called Storm Area 51, where people claimed online that they’d meet up to rush the gates at a not-so-secret military site. The logic? "They can’t stop all of us.”

In the end, about as many reporters as gate rushers showed up outside Area 51, Scoles says. And only a few participants were arrested for trespassing.

Of course, all that information becomes less impressive when you consider that people are now seeing fewer suspected alien craft than they were not so long ago. And that’s with the rise of cell phones, many hundreds of new satellites in the sky, major national coverage of U.S. fighter pilots seeing UFOs, and more of us stuck at home than ever.

But even if armadas of UFOs aren’t appearing over American cities, their intrigue certainly doesn’t seem to be going away. Studies suggest that one-third of Americans believe that UFOs are aliens, and one-sixth of Americans claim to have actually seen a UFO.

For most believers, it’s mainly just fun, Scoles says. So, if they see something others might assume was a military test, they’re probably not going to go read up on it and accept an official explanation. They want to believe.

“People like to have some mystery, especially right now,” Scoles says. “There’s not a lot happening that's good. It's kind of fun to have a little enigma in your life.”