Real-Life Rogue One: How the Soviets Stole NASA’s Shuttle Plans 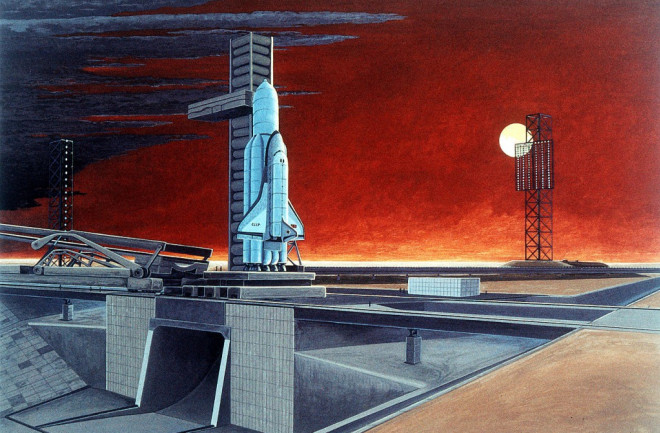 An artist's illustration of the Buran shuttle. (Credit: Wikimedia Commons)

In the decrepit ruins of a Cold War-era Kazakhstani hangar, buried beneath decades of detritus, there’s a spaceship that was once the last hope of the Soviet space empire.

And you’d be forgiven for confusing the Buran shuttles (Russian for “snowstorm”) with say, America’s iconic Space Shuttle Enterprise, which is proudly displayed in a Manhattan museum. Their shapes, sizes and technology are almost identical, apart from the sickle and hammer.

But unlike the American shuttle, which flew 135 times before being mothballed over safety issues and absurd costs, Buran flew just once. The Soviet space program spent itself out of business as the USSR collapsed 25 years ago this month. And with Russia’s interference in American elections, the tale of the hacked space shuttle plans is worth revisiting. Not even Lucasfilm could cook up a plot this rich.

In the ‘70s and ‘80s, Russian KGB spies systematically stole NASA shuttle designs and smuggled them back to their motherland, as detailed in a 1997 NBC News investigation by journalist Robert Windrem. Later, as America tested its new cosmic vessel, Soviet aircraft and satellites flew reconnaissance missions to aide their own carbon copy.

The American Shuttle Program was never designed or intended to support weaponry. But early on, some Soviet military leaders saw it as a space bomber, capable of materializing over Moscow with nuclear weapons. Those defense leaders used that fear to secure enormous funding for their own shuttle. Even as the East and West negotiated a treaty to prevent weaponizing space, the Russian military ordered a space shuttle of its own.

But instead of building off a Soviet space plane they’d tested more than a decade earlier, Red military leaders thought it best to do what the Americans were doing — construct a hulking and pricey, all-purpose space truck. And because NASA’s shuttle tech wasn’t classified, the Soviets helped themselves to it — saving billions.

A Little Too Easy

Early on, spies would simply head out from the Soviet embassy and purchase copies of publicly available documents from the Government Printing Office. Later, they used computer hacking to cull reams of information — thousands of documents — from the American government, stealing the designs on everything from propulsion to airframes and computer systems. The spies even targeted universities with related research.

“The massive effort directed at the U.S. space shuttle program was among the first cases of Internet espionage, if not the first case,” Windrem wrote in ’97.

Once American spy agencies got wise, they banded together to strike back. The CIA started feeding flawed shuttle designs — NASA rejects — to the Soviet spies, which they passed off as new “improvements.” It worked. Included in the phonies were outdated heat shield designs that could have risked the spacecraft burning up on reentry.

The entire two-part ‘97 NBC News investigation reads like a spy thriller packed with unbelievably bold espionage and counter-espionage, executions, the collapse of a great and terrible empire, and defunct spaceships. Consider it a warm-up for the Star Wars premiere.

And if you still want more Cold War reminiscing, you can read my December feature in Discover, “The Last Soviet Citizen,” on the tale of cosmonaut Sergei Krikalev, who watched his country crumble from orbit in ’91, paving the way for US-Russian cooperation in space.

Eric Betz is an associate editor of Discover. He’s on Twitter @ericbetz.