Women's contributions to astronomy date back centuries. Learn more about female astronomers past and present with a new app. 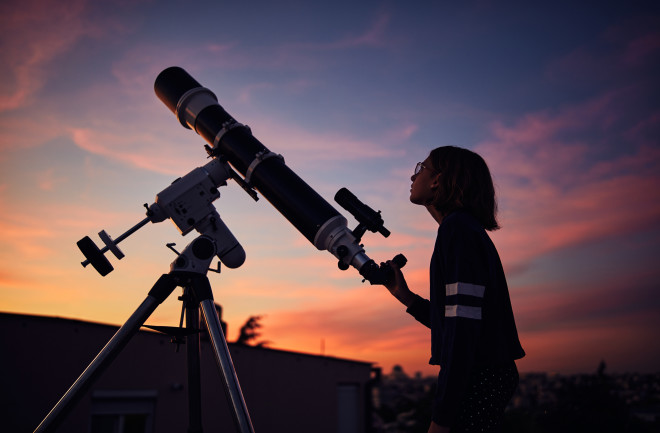 Female astronomers have made significant contributions to science, though their work has often gone unrecognized. (Credit: AstroStar/Shutterstock)

Today, more women than ever are studying space. The number of female physicists, astronomers, mathematicians and more is steadily rising, after centuries of male overrepresentation in science. This has meant more role models for girls and young women deciding what they want to do with their future, and an increased diversity of viewpoints and ideas for science as a whole.

But of course, it wasn’t always that way. Women were historically excluded from scientific research, something that only began to slowly change in the last century. But that doesn’t mean that women haven’t been part of science. In astronomy alone, female astronomers, mathematicians and scientists did fundamental observing work, discovered comets, organized star catalogs and more. But their achievements were often overshadowed by the work of — or worse, falsely attributed to — their male colleagues, meaning that our understanding of the history of astronomy is incomplete.

That’s changed in recent years as books, movies and more have illuminated the lives of these brilliant women — not least of which was the movie Hidden Figures, which chronicled the work of female African-American mathematicians at NASA. But women’s contributions to the study of the universe goes back centuries.

Beginning in the 18th century, Caroline Herschel, a German astronomer, made observations of the night sky, looking for new nebulae and comets. She would go on to discover multiple previously unknown comets, including 35P/Herschel-Rigollet, and perform work that formed the basis for the New General Catalogue of deep sky objects that’s still in use today.

Herschel led a life far different than the one she may have expected. Initially intent on becoming a singer, she instead followed her brother William Herschel’s passion for astronomy, growing to become a studious and dedicated astronomer in her own right. Herschel was the first woman to publish in Philosophical Transactions of the Royal Society, and was eventually awarded a Gold Medal of the Royal Astronomical Society. She was also likely the first woman to earn a salary for her scientific work — 50 pounds annually, or more than $7,500 today.

An illustration from Volume 77 of Philosophical Transactions, with six diagrams showing comets found by Caroline Herschel and her brother, William, along with their positions.

More than a century after Herschel, Scottish astronomer Williamina Fleming would also make important contributions to a star catalog. While in charge of the Henry Draper catalog, Fleming developed a new system for classifying stars according to the relative amounts of hydrogen they contained, which astronomers could see in the spectrum of light they emitted. The catalog eventually included more than 10,000 stars, and was an important reference for astronomers as they worked to better understand the diversity of stars our universe contains.

Fleming might be best known today, however, as the discoverer of the Horsehead Nebula, one of the most visually striking and well-known nebulae — massive clouds of gas and dust — in the galaxy. She also made impressive observing contributions like discovering 59 nebulae, more than 310 variable stars and 10 novae herself, as well as the first-ever white dwarf.

In the 20th century, the space race commandeered the public’s attention for much of the 1960s, as the U.S. and Russia vied to put humans in space, and then on the Moon. But behind the astronauts, many largely unrecognized individuals worked long hours and pioneered cutting-edge technologies to realize the dream of becoming a space-faring nation. Those behind-the-scenes heroes included a small group of African-American mathematicians, now memorialized in the movie Hidden Figures, who were instrumental in getting American astronauts to space.

The hidden figures included Dorothy Vaughan, a mathematician who spent nearly three decades working for the U.S. government, at both the precursor to NASA and NASA itself. There, she supervised a group of “human computers” who carried out the complex calculations necessary to send rockets to orbit and bring astronauts back down safely. She was involved with the Scout Vehicle Launch Program, an early rocket program that sent small satellites to space, and later helped launch John Glenn, the first American to orbit the Earth, to space in 1962.

Not to be outdone, the Soviets announced the very next year that they would be sending the first female cosmonaut to space. They accomplished that in 1963 when Valentina Tereshkova made the trip to orbit during the Vostok 6 mission, becoming the first woman in space. Tereshkova spent three days in orbit before touching back down safely. She’d gotten the job because of her interest in skydiving — the Soviet space program recruited parachutists as cosmonauts. Tereshkova became world famous after her trip, touring the globe and speaking to crowds about her journey. Later, she earned a doctorate in aeronautical engineering and retired from the Soviet Air Force with the rank of major general.

There are countless examples of women contributing in meaningful ways to astronomy — too many for one article! To learn more about the rich history of women astronomers, as well as the many female scientists advancing our knowledge today, check out Reach Across the Stars, a new augmented reality app from NASA.

Try It Out! Find Reach Across the Stars Here

The free app features special 360 degree AR tours narrated by leading scientists that let you fly to Mars, float through the International Space Station, get a behind-the-scenes look at the Mars 2020 rover and much more! You can also learn about new science firsthand with interviews with awesome scientists like Christina Hernández, a systems engineer at the Jet Propulsion Laboratory, NASA astronauts Cady Coleman and Jessica Watkins and computer scientist and astronomer Wanda Diaz Merced.

You can find out more about the app, listed as an Apple App of the Day, on Science Near Me. SNM is your one-stop-shop for opportunities to engage in science and try out new activities. You can find many more astronomy events near you, like Star Parties, planetarium shows and more on ScienceNearMe.org.