Carbonaceous chondrites are some of the most valued meteorites. 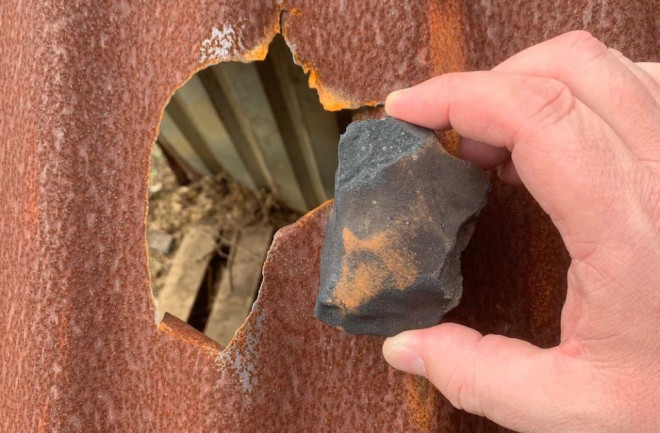 One of the meteorites that fell at Aguas Zarcas struck a doghouse’s roof. (Credit: courtesy Michael Farmer)

A rare meteorite fall in Costa Rica has astronomers racing to get their hands on samples.

Meteorites are an astronomer’s dream. In a field that by definition studies objects and phenomena above and beyond Earth’s atmosphere, many researchers never get a chance to touch or see up close the things they study. But then, sometimes, these items simply rain down from the sky, in the form of ancient space rocks called meteorites.

Meteorites come in many different types. But some of the most precious are called carbonaceous chondrites, valued because they contain large amounts of water and organic compounds. These meteorites contain a history of that water from the solar system’s early days, and trace how the materials of life were distributed across the planets and space.

On April 23 of this year, one of these meteors — roughly the size of a washing machine — streaked through the skies over the Costa Rican town of Aguas Zarcas. As it fell, it broke into many smaller pieces, and astronomers scrambled to collect and study them. They are the first large fall of carbonaceous chondrites in half a century, and should provide ample data on the history of water in the solar system, according to a press release from Arizona State University, which is studying the meteorite.

Even though meteoroids have survived in space for billions of years, all the water contained in carbonaceous chondrites can make them surprisingly fragile once they hit the ground. They’re basically balls of clay, and dissolve rapidly when exposed to more water – and May marks the beginning of the rainy season in Costa Rica. So meteorite hunters knew there was a clock ticking as soon as the fireball streaked across the skies above Aguas Zarcas.

They ended up having five days to search for and collect the meteorites from the surrounding area before the rain fell. About 55 pounds have been collected so far. Some of them have made their way to ASU thanks to a meteorite hunter named Michael Farmer. He collected some of the space rocks or bought them from locals and donated them to ASU, which has a dedicated Center for Meteorite Studies. Researchers there are comparing the Aguas Zarcas fall to other, previously known meteo

The last time such a large fall of water-rich meteors occurred was the Murchison meteorite in Australia in 1969. The 220-pound Murchison meteorite remains one of the most-studied space rocks of all time, thanks to its large size and rich composition, which includes both water and organic compounds necessary for life.

All meteors began as part of larger asteroids. These building blocks of the solar system are the same as the long-ago space rocks that collided to form Earth and the other planets, and could be the source of Earth’s water and other materials vital for the formation of life. By analyzing the detailed chemistry of the water contained in meteorites, researchers can learn when and how Earth obtained its water, which had a big impact on Earth’s early history. Asteroids can also contain carbon compounds that scientists think are essential for the formation of life.

In addition to telling the history of the solar system, meteorites might also guide our future. Mining asteroids for water is a key step in most plans for future space exploration, and those days are looking ever closer to hand.

Meanwhile, research on the Augas Zarcas meteorites is just beginning, and researchers will probably be mining their secrets for decades to come.