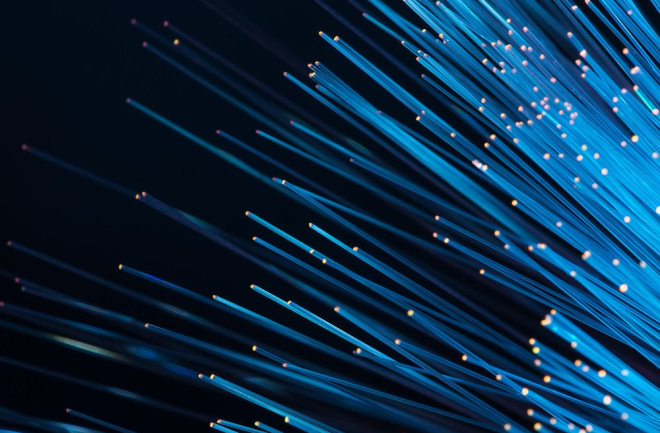 Two separate teams of scientists have taken quantum teleportation from the lab into the real world. Researchers working in Calgary, Canada and Hefei, China, used existing fiber optics networks to transmit small units of information across cities via quantum entanglement — Einstein's "spooky action at a distance."

Stepping Outside the Lab

According to quantum mechanics, some objects, like photons or electrons, can be entangled. This means that no matter how far apart they are, what happens to one will affect the other instantaneously. To Einstein, this seemed ridiculous, because it entailed information moving faster than the speed of light, something he deemed impossible. But, numerous experiments have shown that entanglement does indeed exist.

The challenge was putting it to use. A few experiments in the lab had previously managed to send information using quantum entanglement. But translating their efforts to the real world, where any number of factors could confound the process is a much more difficult challenge.

That’s exactly what these two teams of researchers have done. Their breakthrough, published in two separate papers today in Nature Photonics, promises to offer important advancements for communications and encryption technologies. Both experiments encode a message into a photon and send it to a way station of sorts.

The two experiments weren't able to transmit very much information — the Calgary experiment was the quickest, and they only managed 17 photons a minute. The Hefei experiment was able to guess the state of the photons with better accuracy, however. While the Calgary researchers succeeded about 25 percent of the time, the Hefei researchers were right at most 50 percent of the time, due to their inclusion of an extra, albeit time-consuming, step in the process.

Because both methods possess their own advantages, they will likely each form the basis for further research. Nevertheless, both teams were able to use existing telecommunications infrastructure to accomplish something that had only been done in the lab before — a big step forward. The Calgary team sent photons over a distance of about 4 miles, while the Hefei team spanned almost 9.

Beam Me Up Scotty?

This isn't teleportation in the "Star Trek" sense — the photons aren't disappearing from one place and appearing in another. Instead, it's the information that's being teleported through quantum entanglement. The teleportation moniker is used because the initial message sent is destroyed when the photon carrying it gets measured, and it is only the information that gets teleported from one place to another.

One of the largest hurdles for both teams to overcome was the tendency of fiber optic cables to stretch and compress due to temperature changes. While this doesn't matter for regular telecommunications, for quantum communication, the photons that are sent must arrive at precisely the same time. Both teams of researchers used additional complex data inputs to ensure that their photons were arriving exactly the same as they started out.

Quantum teleportation over long distances has actually been accomplished before — in 2012, a team of researchers from Austria sent information almost 90 miles between two of the Canary Islands using lasers. Using lasers to send information can work in some situations, but adverse environmental conditions can disrupt the signal. This is why the internet today consists of a network of fiber optic cables instead.

Quantum teleportation’s biggest application will likely be as a means of encrypting information. Because the two photons communicate with each other by entanglement, there's no way for an outsider to read them. To decrypt a message, you would need the key, which is sent over the internet. Even if you intercepted the key, you would still only have half of the puzzle — to fully read it, you would need the entangled photons themselves.

The process could even theoretically be used to create a network of quantum repeaters to stretch the networks capabilities between cities and countries, New Scientist writes. Someday, the same spooky action that frustrated Einstein could be delivering your emails.