Everything Worth Knowing About ... Entanglement 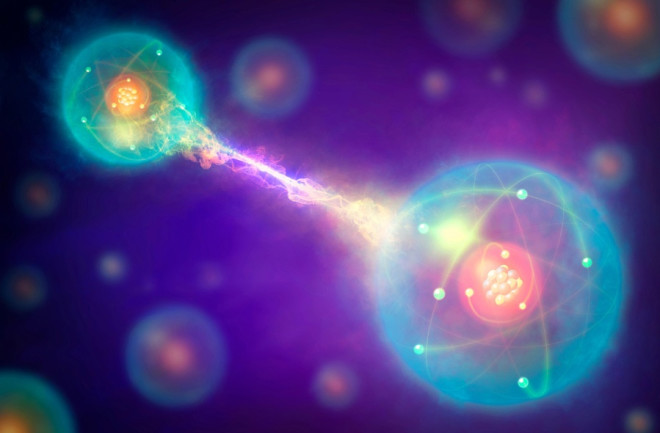 Up until last year, mathematician Peter Bierhorst had hoped the physicists he works with would fail. It was nothing personal. He just found their worldview a little disturbing.

Like most physicists, his co-workers believe that our universe’s particles can influence each other using a sort of telepathy. Called “entanglement,” this connection allows two particles separated by vast distances to behave as a single entity. Both instantly react to something that happens to one of them.

Fuzzy Physics To understand entanglement, you must first accept that reality is unsure of itself at small scales. In 1927, Werner Heisenberg argued that it’s impossible to know both a particle’s position and momentum exactly. Measuring one simply makes the other fuzzier. Particles are fundamentally indecisive — neither precisely here nor there, and both at once. Making measurements effectively forces particles to choose how to behave. Einstein disliked this idea of a random universe; the atheist famously proclaimed his disbelief that God played at dice. (Quantum pioneer Niels Bohr supposedly replied, “Einstein, stop telling God what to do.”)

So peeved was Einstein that he and his friends came up with a thought experiment to show how it was possible to learn both the positions and momentums of pairs of particles. Preserving their uncertainty would require one particle in the pair to instantly know and react when the other is measured — even at the other end of the universe. Every story about entanglement is obligated to include Einstein’s reaction to this apparent faster-than-light communication: “spooky action at a distance.” Unwilling to accept it, he declared quantum mechanics incomplete.

In the end, though, Einstein would be undone by his own objection. “I like to think that he would have come around and accepted entanglement given the evidence today,” says Don Howard, a professor of philosophy at the University of Notre Dame.

A Paradox of Pairs Roen Kelly

Testing the Spookiness Proving Einstein wrong is never easy. But in the 1960s, an unassuming physicist from Northern Ireland found a way that eventually earned him a Nobel Prize nomination. John Stewart Bell’s math set a limit on how similar the behavior of particles could be in a universe explained only by traditional physics. Correlations beyond that limit would require something at least as spooky as entanglement.

Starting in the 1980s, scientists playing with pairs of particles in Paris, Geneva and Austria found behaviors beyond Bell’s limit. Their experiments sought to rule out alternative, entanglement-free theories that physicists had been crafting for decades. Most of the physics community accepted the results from Europe, bringing entanglement into the scientific mainstream, but each experiment had at least one shortcoming, giving hardcore skeptics room for doubt. Some of the experiments studied particles near each other, which could have sent regular, slower-than-light messages. Others lost a fraction of the particles in transit, leaving questions about whether those that were measured were representative of all particles.

“Closing all these loopholes in one experiment has been an enormous technical challenge,” says Christian Kurtsiefer, a physicist at the Centre for Quantum Technologies in Singapore. But last year, researchers in the Netherlands finally reported the first loophole-free Bell test. Two other groups followed close on their heels in the fall, including Bierhorst’s team (to his chagrin). The chance that the strongest of these results could have happened without entanglement is less than 1 in 4 million.

And as if two entangled particles aren’t spooky enough, some researchers are now thinking about what it means for three, 10 or even thousands of particles to be entangled. Others hope to tie the quantum effect to gravity, or use it to explore how reality can be thought of in terms of information. The weirdest days of entanglement may still lie ahead.

Thousands of ultracold strontium atoms vibrate in a lattice of laser light inside this record-setting atomic clock, designed by researchers at the Joint Institute for Lab Astrophysics in partnership with the National Institute of Standards and Technology. Entangling the atoms inside such a clock could lead to even more precise time measurements. Marti/JILA/National Institute of Standards and Technology

Thousands of ultracold strontium atoms vibrate in a lattice of laser light inside this record-setting atomic clock, designed by researchers at the Joint Institute for Lab Astrophysics in partnership with the National Institute of Standards and Technology. Entangling the atoms inside such a clock could lead to even more precise time measurements.Marti/JILA/National Institute of Standards and TechnologyIt’s not just a quirk of physics. Over the years, entanglement has inspired a slew of new technologies still under development.

Distance records set for entanglement may pave the way to a quantum version of the Internet in which information hops from place to place via pairs of entangled particles. Researchers have sent messages dozens of miles using teleportation, a quantum phenomenon that has nothing to do with Star Trek. This communication does not happen faster than the speed of light; making sense of it requires a regular, light-speed message in addition to the teleportation. But in theory this quantum communication is perfectly secure against hackers trying to eavesdrop on the data.

Erwin Schrödinger, who famously poked fun at quantum physics with his cat in a box, coined the term entanglement, using the German word verschränkung. Mopic/Shutterstock

Entanglement could also improve the world’s best clocks, which keep time via the vibrations of atoms. Linking thousands of atoms at the quantum level so they vibrate together could lead to new clocks that lose less than one second in 15 billion years, the current record. This helps not just the punctiliously punctual, but could also improve the precision of GPS systems synchronized using such clocks.

Technological improvements have led to simple quantum computers that could, if scaled up, do certain things better than today’s computers, such as searching through unsorted lists and factoring big numbers. At a more fundamental level, playing with the building blocks of those devices has opened the door to understanding why the quantum world is so different from our own. Defining that boundary of the quantum world is one of many open questions that remain for entanglement. The most grand of theories, bound to leave you scratching your head, even allow for the possibility that, to some degree, everything in the universe is entangled.

Entanglement A poem by Jane Hirshfield

A librarian in Calcutta and an entomologist in Prague sign their moon-faced illicit emails, “ton entanglée.”

No one can explain it. The strange charm between border collie and sheep, leaf and wind, the two distant electrons.

There is, too, the matter of a horse race. Each person shouts for his own horse louder, confident in the rising din past whip, past mud, the horse will hear his own name in his own quickened ear.

Desire is different: desire is the moment before the race is run.

Has an electron never refused the invitation to change direction, sent in no knowable envelope, with no knowable ring?

A story told often: after the lecture, the widow insisting the universe rests on the back of a turtle. And what, the physicist asks, does the turtle rest on?

Very clever, young man, she replies, very clever, but it’s turtles all the way down.

And so a woman in Beijing buys for her love, who practices turtle geometry in Boston, a metal trinket from a night-market street stall.

On the back of a turtle, at rest on its shell, a turtle. Inside that green-painted shell, another, still smaller.

This continues for many turtles, until finally, too small to see or to lift up by its curious, preacherly head a single un-green electron waits the width of a world for some weightless message sent into the din of existence for it alone.

You are there. I am here. I remember.

Jane Hirshfield, a current chancellor of the Academy of American Poets, is the author of The Beauty, a book of poems, and Ten WIndows, a book of essays.[This article originally appeared in print as "Entanglement."]