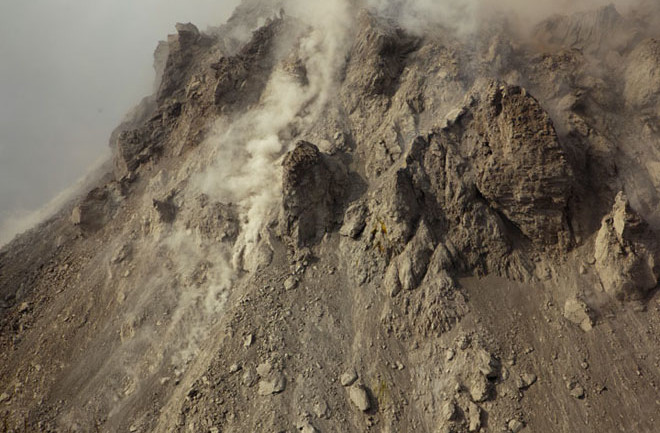 The crumbling lava dome at Paluweh in Indonesia, seen on December 1, 2012. The collapse of a dome such as this may be the cause of the February 2, 2013 explosive eruption at Paluweh. Image: Tom Pfeiffer / Volcano Discovery. Over the weekend, the fairly remote Indonesian volcano Paluweh (also known as Rokatenda) erupted. Now, the size of the eruption is somewhat unclear due to its location on Palu'e Island, north of Flores Island. Early VAAC reports suggested ash as high as 43,000 feet / ~13 km, however reports from on the ground put it closer to 13-16,000 feet / 4-5 km. Now, that is a sizable difference and possibly the early VAAC reports from satellite and aerial observations got the height wrong -- but in any case, the volcano did experience a notable explosive eruption. Ash fell on towns on the nearby island of Flores, with thicknesses in the millimeters (so noticeable but not very hazardous). The island had been evacuated (~10,000 villagers) earlier last year after the volcano showed signs of unrest. UPDATE 1:45 PM EST: I've added a third image after Simon Carn pointed out that the second image was taken before, not after, the explosive eruption this weekend at Paluweh. A dome had been growing at Paluweh since at least November 2012, and as we've seen before at other volcanoes, these lava domes can oversteepen and collapse as image taken by Tom Pfeffier of Volcano Discovery clearly shows (above) as lava intrudes from underneath and pushes the dome outward. Two things happen when the dome collapses -- first, a pyroclastic flow forms from the rubbles of the collapsed dome (typically the material is still hot) and if pressure was building under the dome from degassing magma, an explosive eruption can occur when the pressure drops from the loss of the dome. This is my guess of what happened over the weekend at Paluweh and lucky for us, we have satellite imagery to support it.

Aqua/MODIS image of Paluweh, showing the thermal anomaly caused by the active lava dome. Taken January 27, 2013. Image: R. Simmon / NASA. The first image shows Paluweh on January 27, 2013 (above). You can notice the large thermal anomaly observations (in the red box) that likely represents the growing dome. The second image, taken on February 2, 2013 (below), shows the volcano before the early morning February 3 explosive eruption. We can't see the summit, but what is most striking is the light-colored deposit to the west of the island that wasn't present on the January 27 image. This deposit could be pyroclastic material or ash from small dome-collapses that may have occurred earlier in the day. It is very reminiscent of the debris fans from dome-collapse pyroclastic flows at Soufriere Hills on Montserrat, a similar volcano to Paluweh. There also seems to be a health steam plume covering a lot of the island, blowing to the south. However, this is before the main explosive eruption, so we might be seeing the shedding of material that lead to the main collapse -- the event where pressure was released catastrophically in the form of the explosive eruption. Many times, these dome-collapse eruptions are fairly ephermal -- a big bang when the pressure drops, but once equilibrium is reached, the eruption ends.

Terra/MODIS image of potential pyroclastic flow deposits in the ocean west of Paluweh in Indonesia, taken February 2, 2013. Image: R. Simmon / NASA. We can look at a final image taken February 5 (below) that shows that the southern half of the island is distinctly greyer than the image taken January 27, suggesting that pyroclastic material and ash have coated the landscape -- that makes sense considering that Flores Island was coated with a thin layer of ash during the activity of February 3.

Aqua/MODIS image of Paluweh in Indonesia taken on February 5, 2013. The southern half of the image looks greyer than the January 27, 2013 image (above), evidence of the ash and pyroclastic flow deposits from the February 3, 2013 explosive eruption. Image: NASA. If the dome continues to collapse, we might expect more small explosive eruptions from Paluweh, although activity has declined since the weekend. In any case, these images show the changes caused by an ephemeral event that wasn't seen by many people at all and the power of having eyes in the sky to watch over volcanoes like Paluweh.