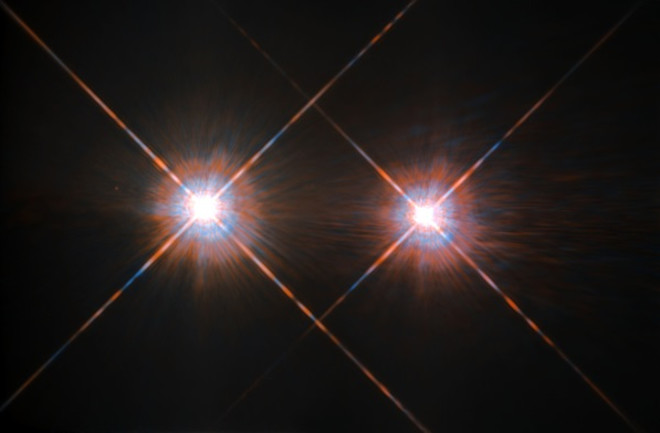 (Credit: ESA/Hubble) Pale Red Dot fulfilled its goal of finding a planet around Proxima Centauri. But a new group, going under the name Project Blue, is ready to turn its attention toward the largest stars in the system: Alpha Centauri A & B. The goal? To do what others have failed to do: find a planet there. But not just any planet. The two year initiative will concentrate on finding a planet in the habitable zone of one of the stars. And they’ll try to snap a picture of it, a more distant “Pale Blue Dot” picture. It’s an audacious goal. The only directly imaged planets have been Jupiter-sized worlds a few million years old. But with a distance of 4.4 light years, there may be a chance to catch a planet there. The project will look in visible light spectrum in blue and green channels. It won’t be much. Maybe a pixel or so, but it will be enough to figure out if there’s the chance it’s a water world. “Project Blue has sprung out of the urgency to do a Pale Blue Dot image that is the holy grail of exoplanet research,” Jon Morse, CEO of the Boldly Go Institute, says. Boldly Go is organizing the project, which will involve the SETI Institute and the University of Massachusetts, as well as other funders and stakeholders. The plan calls for launching a telescope into low Earth orbit with an aperture of 17.7 inches (45 cm). That’s essentially as big as a high-end backyard telescope. It will use a coronagraph to black out the light of the stars, and use adaptive optics to create a robust signal to noise ratio. After two years, with all luck, a planet will emerge. “It’s a very daunting challenge to observe a small planet around a sunlike star — the wobble of the star is small and it’s at the edge of whatever we’re able to achieve,” Morse says. If the project succeeds, we’ll find a planet that’s thus far only been dreamed of in science fiction. If it doesn’t, the group will still have valuable information about how to use it around other nearby Sun-like stars.