The highest temperature superconductivity only works at fantastic pressures. But a new technique aims to make it possible at ambient pressures, raising the prospect of zero-resistance energy supplies, transport systems and more. 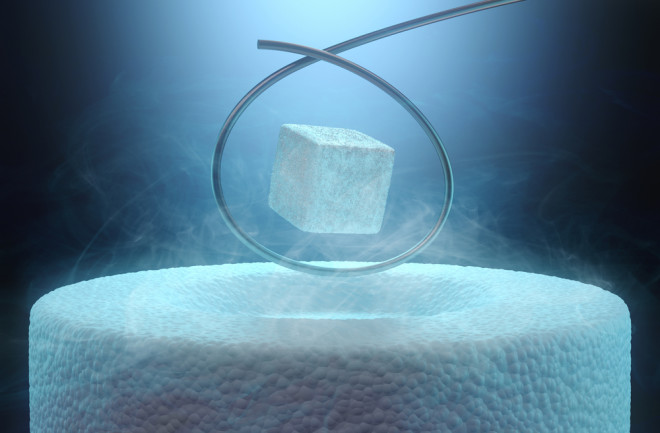 Last year, physicists at the University of Rochester demonstrated room temperature superconductivity in a sample of carbonaceous hydrogen sulfide at about 15 degrees Centigrade.

But there was also a problem: the demonstration took place at huge pressures — 267 gigapascals, about two thirds of the pressure at the center of the Earth. The researchers achieved this in tiny quantities of material inside a diamond anvil that crushed its contents with mind-boggling forces. These forces allow new exotic lattice structures to from and in some cases even new molecules and these made superconduction possible.

These materials are not easy to exploit. Superconductors allow electrical current to flow with zero resistance and so are hugely efficient. The dream of materials scientists is that room temperature superconductors will transform everything from power supplies to magnetically levitated transport systems to high performance supercomputers. But if enormous pressures are required, the prospect of achieving these dreams seems remote.

So materials scientists are desperate to find a way to achieve room temperature superconductivity at ordinary pressures. Now Liangzi Deng at the University of Houston, Texas, and colleagues think they know how to achieve this. Their idea is to find a way to maintain the exotic lattice structures and molecules that enable superconductivity even after the pressure is released. And they have the first evidence that this approach works.

The idea that materials and their phases can form in certain conditions and remain stable in others is relatively common. Water, for example, usually freezes at 0 degrees Centigrade. But if it contains no impurities around which ice crystals can nucleate, the process of ice formation cannot start. In these conditions, water can remain liquid down to almost -50 degrees C.

That raises the possibility that a similar approach can allow a room temperature superconductor to form at high pressure and remain stable at lower pressures.

Now Deng and colleagues have tested this idea on iron selenide (FeSe), which at ordinary atmospheric pressure becomes superconducting at 9 Kelvin (-264 degrees C).

Deng and co increased this pressure to 4 gigapascals (about 4 thousand times atmospheric pressure) and found they could increase the critical superconducting temperature to almost 40 Kelvin. Usually an increase in temperature would destroy the special superconducting phases in the material. But the extra pressure kept them stable.

The team say this “pressure quenching” process allows iron selenide to superconduct at 37 K at ambient pressure. More interesting is their discovery that certain other material phases can remain stable at 300 Kelvin — room temperature — for at least seven days.

“The observations suggest that the recently reported room-temperature superconductivity in hydrides close to 300 gigapascals may be retained without pressure, making possible the ubiquitous applications of superconductivity,” they say.

That’s interesting work suggesting that room temperature superconductivity can be achieved at ambient pressures in the not-too-distant future. There will be no shortage of labs around the world attempting to test this idea. The group that achieves it first will have much to boast about.