Ground-shaking earthquakes occur all across the globe. And according to a new study, many of them might be triggered by the sun. 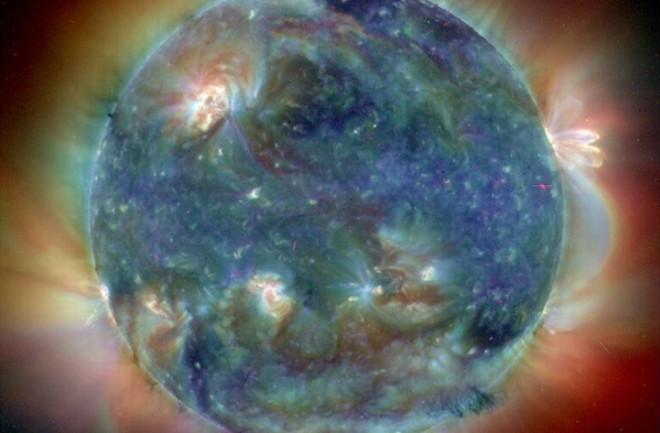 This false-color composite of the Sun was created using ultraviolet images taken by the Solar and Heliospheric Observatory (SOHO) satellite. (Credit: NASA/ESA)

Through decades of research, scientists have learned that large, powerful earthquakes commonly occur in groups, not in random patterns. But exactly why has so far remained a mystery. Now, new research published July 13 in Scientific Reviews, asserts the first strong — though still disputed — evidence that powerful eruptions on the sun can trigger mass earthquake events on Earth.

“Large earthquakes all around the world are not evenly distributed … there is some correlation among them,” says Giuseppe De Natale, research director at the National Institute of Geophysics and Volcanology in Rome and co-author of the new study. “We have tested the hypothesis that solar activity can influence the worldwide [occurrence of earthquakes].”

A Solar Origin for Earthquakes

To the unaided eye, the sun might seem relatively docile. But our star is constantly bombarding the solar system with vast amounts of energy and particles in the form of the solar wind. Sometimes, however, formidable eruptions on the sun’s surface cause coronal mass ejections, or especially energetic floods of particles — including ions and electrons — that careen through the solar system at breakneck speeds. When they reach Earth, these charged particles can interfere with satellites, and under extreme circumstances, take down power grids. The new research suggests that particles from powerful eruptions like this — specifically, the positively charged ions — might be responsible for triggering groups of strong earthquakes.

Earthquakes typically occur when rocks grind past one another as Earth’s tectonic plates shift and jostle for position. When the intense friction that’s locking plates together is overcome, the rocks break, releasing tremendous amounts of energy and shaking the ground.

But scientists have also noticed a pattern in some large earthquakes around the planet: they tend to occur in groups, not at random. This suggests there may be some global phenomenon that’s triggering these worldwide earthquake parties. And though many researchers have done statistical studies to try to determine a cause before, no compelling theories have yet been rigorously proven.

So, to tackle the lingering mystery, the researchers of this latest study combed through 20 years of data on both earthquakes and solar activity, searching for any possible correlations. Specifically, the team used data from NASA-ESA’s Solar and Heliospheric Observatory (SOHO) satellite, compiling measurements of protons (positively charged particles) that come from the sun and wash over our planet.

SOHO, which is located 900,000 miles (1.45 million kilometers) from Earth, keeps its sights set on the sun, which helps scientists track how much solar material ends up striking our planet. By comparing the ISC-GEM Global Instrumental Earthquake Catalogue — a historical record of strong earthquakes — to SOHO data, the scientists noticed more strong earthquakes occurred when the number and velocities of incoming solar protons increased. Specifically, when protons streaming from the sun peaked, there was a spike in quakes above magnitude 5.6 for the next 24 hours.

“This statistical test of the hypothesis is very significant,” De Natale says. “The probability that it's just by chance that we observe this, is very, very low — less than 1 in 100,000.”

A Piezoelectrical Origin for Earthquakes

After noticing the correlation between solar proton flux and strong earthquakes, the researchers went on to propose a possible explanation: a mechanism called the reverse piezoelectric effect.

Previous experiments have clearly shown that compressing quartz, a rock common in the Earth’s crust, can generate an electrical pulse through a process known as the piezoelectric effect. The researchers think that such small pulses could destabilize faults that are already close to rupturing, triggering earthquakes. In fact, signatures from electromagnetic events — such as earthquake lightning and radio waves — have been recorded occurring alongside earthquakes in the past. Some researchers think these events are caused by the earthquakes themselves. But several other studies have detected strong electromagnetic anomalies before large earthquakes, not after, so the exact nature of the relationship between earthquakes and electromagnetic events is still debated.

The new explanation, however, flips this electromagnetic cause-and-effect on its head, suggesting electromagnetic anomalies aren’t the result of earthquakes, but instead cause them. It goes like this: As positively charged protons from the sun crash into Earth protective magnetic bubble, they create electromagnetic currents that propagate across the globe. Pulses created by these currents could then go on to deform quartz in Earth’s crust, ultimately triggering quakes.

This is not the first time scientists have tried to link solar activity to earthquakes, however. In 1853, a Swiss astronomer named Rudolf Wolf tried to connect sunspots ­— locations of intense magnetic activity on the surface of the sun — to earthquakes. More recent experiments have also sought such a link, but strong statistical evidence remains out of reach. A 2013 paper published in Geophysical Review Letters, for instance, looked at 100 years of sunspot and geomagnetic data, finding no evidence of a connection between the sun and earthquakes.

Partly because long-term efforts to find a link between the sun and earthquakes have come up short, this latest claim that solar protons may play a role has been met by notable skepticism in the research community. Some are wary of the statistical analysis performed on the data, while others take issue with how the data was selected.

“The results [from the new paper] alone don't tell you there's actually any real physical connection, I think,” says Jeremy Thomas, a research scientist at NorthWest Research Associates who was not involved in the new research. “There could be, but I don't think it's proving that.”

As is almost always the case with science, more research is required before we can know for sure if the sun can trigger earthquakes. But if future work manages to cement the proposed connection, keeping a close eye on our shining star might help us better predict and prepare for when the ground unexpectedly and violently shakes beneath our feet, possibly helping save lives.