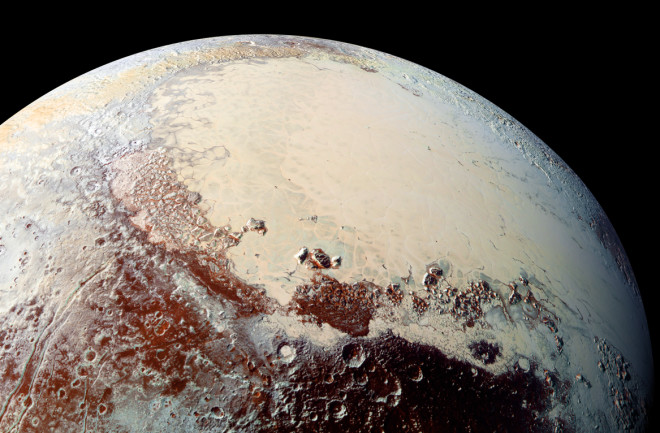 Pluto, up close. (Source: NASA/JHUAPL/SwRI) The first detailed science about Pluto revealed by the spectacularly successful New Horizons mission has just been published. So I thought I'd use that as an occasion to share some Plutonian eye candy — a particularly sweet image of this surprisingly dynamic planet. The high-resolution image above combines visual data collected in the blue, red and infrared parts of the electromagnetic spectrum a camera on the spacecraft. The bright expanse is the western lobe of what has come to be called the “heart,” a region found to be rich in nitrogen, carbon monoxide and methane ices. The paper just published in the journal Science is the first installment of much more new knowledge to come about Pluto in the months ahead. It will be coming in slowly as New Horizons sends back the trove of data it has gathered. (It will take until late 2016 for all of the data to be transmitted.) Just from the first installment, we've already learned some surprising things. Pluto's surface is marvelously diverse. It features a wide variety of geological landforms that are the product of impacts, glacial action, interactions between the atmosphere and the surface, tectonic movements of the crust, and possibly cryovolcanoes. In fact, Pluto has turned out to be much more geologically active than expected. As the 151 co-authors of the scientific paper published in Science, put it:

Pluto’s diverse surface geology and long-term activity also raise fundamental questions about how it has remained active many billions of years after its formation.