With the arrival of the New Horizons probe, it’s the planetary reject’s time to shine. 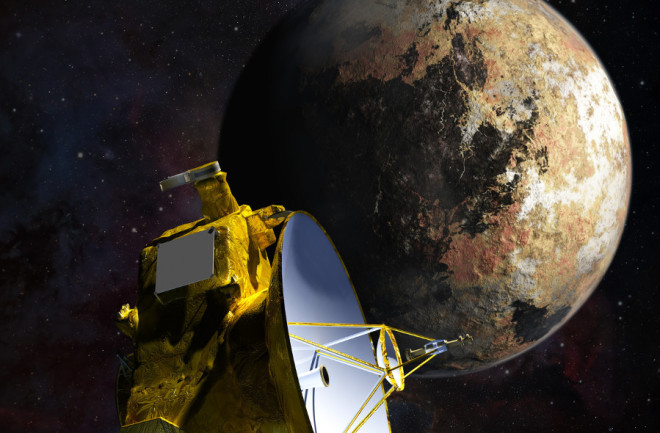 Being stripped of planetary status may be the best thing that ever happened to Pluto. For decades, it seemed like little more than a celestial misfit, much farther out than the solid, Earth-like worlds and far smaller than the giant, gassy ones. But in the nine years since Pluto’s demotion, astronomers have come to appreciate that its oddity is actually an indication of its importance.

When the New Horizons spacecraft flies past Pluto on July 14, it will arrive not at the smallest planet but at the brightest and most intriguing member of the Kuiper Belt, the unexplored outer territory of the solar system. Alan Stern — principal investigator on New Horizons and the No. 1 Pluto booster out there — proudly calls his once-maligned target “the belle of the ball.”

The story of Pluto’s rehabilitation begins, improbably, with the discoveries that dethroned it. Starting in 1992, astronomers Dave Jewitt and Jane Luu identified a succession of objects with orbits similar to Pluto’s. These bodies, along with Pluto, are members of the Kuiper Belt, a population of rocky potential comets orbiting beyond Neptune. Then on Jan. 5, 2005, Michael Brown of Caltech discovered Eris, a Kuiper Belt object roughly the same size as Pluto. Less than two years later, the International Astronomical Union decided that Pluto was no longer lonely enough (technically, its orbit wasn’t empty enough) to be called a proper planet.

But that was just the beginning of Pluto’s transformation. Planetary scientists started to recognize that Pluto’s neighborhood is as rich and complex as the more familiar regions filled by the rocky and gas giant planets. It fills a region vastly larger than that occupied by all of the traditional planets. It is home to countless objects — estimates range from hundreds of thousands to more than a billion — that collectively outweigh the asteroid belt many times over.

Residents of the Kuiper Belt also have diverse colors and shapes, suggesting eclectic compositions and histories. Researchers increasingly began referring to the Kuiper Belt and its environs as the solar system’s “third zone.”

New Horizons’ long journey through the solar system spans more than 3 billion miles and nine years. After its flyby of Pluto in July, the probe will continue to explore the distant Kuiper Belt. | Roen Kelly/Discover

Separately, a group of theorists led by Alessandro Morbidelli at the Observatoire de la Cote d’Azur was beginning to understand the reasons behind the belt’s tremendous complexity. They realized that the early solar system was not an orderly place where planets formed neatly in their present locations, as scientists had long assumed. Conditions around the infant sun were more akin to cosmic pinball, with planets bouncing around and migrating wildly before settling down.

According to the new models, Jupiter drifted inward toward the sun, then tacked back out. As Jupiter moved away, its gravity acted like a giant snowplow, flinging comets and baby planets out into the deep freeze of the Kuiper Belt. If this “Grand Tack” model is correct, Pluto preserves key clues about the solar system’s early days.

In the updated picture, Pluto has a strange dual status, as both the leading representative of the Kuiper Belt and a unique denizen within it. Stern ticks off Pluto’s standout qualities. It has an intricate family of five known satellites, including giant Charon, which is nearly half Pluto’s diameter. “On its own, Charon is one of the largest objects in the Kuiper Belt,” he notes.

Top: A 2012 Hubble photo shows Pluto, its largest moon, Charon, and its four other known moons. Above: Alan Stern, the principal investigator of New Horizons, is also one of Pluto’s biggest fans. | From top: NASA/ESA/M. Showalter (SETI Institute); NASA/Joel Kowsky

Unlike any of the other objects out there, Pluto has a wispy but enormous atmosphere composed of nitrogen, methane and other gases that evaporate off its surface when it nears the sun. New Horizons co-investigator Michael Summers estimates the volume of the atmosphere is 350 times the volume of Pluto itself. And the vague markings visible from Earth show that Pluto has extreme contrasts of light and dark, indicating highly varied terrain.

We will have to wait for the summer arrival of New Horizons to make sense of that tantalizing landscape. Then comes a bonus second act. After the probe’s encounter with Pluto, Stern and his team want to continue on and check out a smaller member of the Kuiper Belt that could be reached within three years. If that happens, scientists will be able to do the first compare-and-contrast in the solar system’s unexplored outer zone. It will be as momentous as the discovery of Uranus by William Herschel in 1781, an event that similarly expanded the scope of the known solar system.

That still leaves one issue unsolved: What do we call Pluto, this ambassador to the undiscovered country? I suggest classifying all Kuiper Belt objects as “Plutoids,” with Pluto the archetype of the whole population. When Stern hears this, he makes a sour face. “Please never use that term. It sounds like hemorrhoid,” he says. Maybe dwarf planet will have to do for now. But there is nothing dwarf about the leading world of the solar system’s third zone.