Plume Spotted at Chirpoi in the Kuril Islands 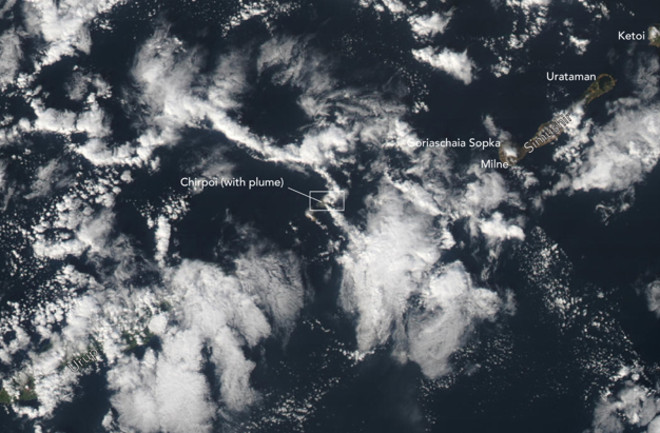 Terra/MODIS image taken November 11, 2012 that shows the plume from Chirpoi in the Kuril Islands. Image: NASA Quick weekend post - Fabrice from Activolcans made me aware of some potential activity at Chirpoi in the Kuril Islands. Located almost halfway between the Kamchatka Peninsula's southern end and the northern tip of Hokkaido, Chirpoi is an isolated volcanic complex on its own island. Chirpoi actually refers to a cluster of volcanic features, including an 9-km-wide caldera and a series of smaller cones, including the active Snow Cone (I chuckled a bit at that). Two eruptions (that we know of) occurred at Snow over the 20th century, the most recent being a VEI 2 in 1962. However, the volcano did produce an eruption that was at least a VEI 4 back in 1712/3. Now, as many of you know, trying to find a clear picture of the Kuril Islands via satellite can be tricky. Fabrice provided me with a small image of what looks like a plume seen on November 16. I looked back through some of the Terra and Aqua images and found a clear picture of the plume on November 11 in the Terra imagery (see above), drifting off to the southeast (towards bottom right). I've labeled the plume and some nearby islands and volcanoes to help get your bearings. The plume looks mainly white, which might suggest it is many a steam plume right now, but it is hard to tell from this image alone. KVERT doesn't tend provide information about the Kuril Islands other than the northernmost, and Chirpoi's remote location just might mean no one has been out there to notice the activity. However, this image and a MODIS thermal anomaly (as reported by

and Fabrice) suggest that something is going on at Chirpoi, but so far, there isn't any evidence of a full eruption, but rather a vigorous steam plume.