There's a new class of theorized objects. They begin as moons around large planets, but eventually move out on their own. 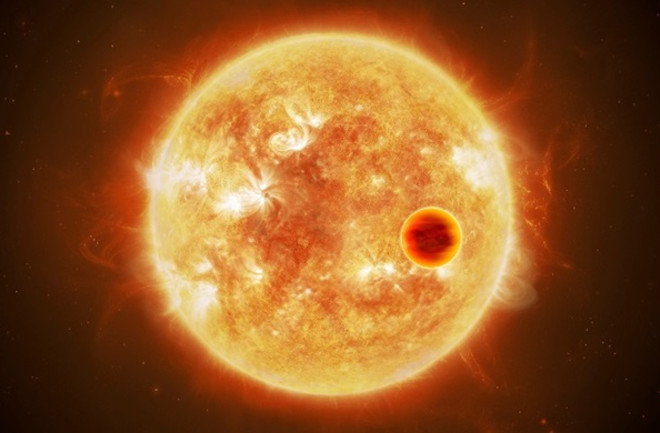 Could moons around hot Jupiters, like the exoplanet shown in this artist’s concept, be stripped from the planets they orbit? New research suggests the answer is yes, and the researchers have defined such objects as “ploonets.” (Credit: ESA/ATG medialab)

Astronomers can’t stop debating about the definition of a planet (see: Pluto). But one thing is for sure — there are a lot of objects that skirt the line between two types of cosmic bodies.

Now, researchers are adding a new kind of boundary-bending world to the mix. In research set to be published in the Monthly Notices of the Royal Astronomical Society, astronomers named a new class of theorized objects that begin as moons around large planets, but eventually move out on their own. They call them “ploonets.” The scientists think these objects should exist in solitary orbits around their host stars and could even be discovered in observations from past and present exoplanet-hunting surveys, like Kepler and TESS.

And to put a cherry on top of the ploonet pie: Because Earth’s own moon is slowly spiraling away from our planet, the team says our only natural satellite may also end up as a ploonet in some 5 billion years. Unfortunately, that’s just in time for our moon to get fully baked by the sun as our star expands into a red giant, reaching a diameter roughly the size of Earth’s orbit.

Over the past few decades, astronomers have uncovered more than 4,000 confirmed exoplanets, and nearly as many exoplanet candidates. And one thing astronomers have learned from this sizeable census is that a surprisingly high number of massive exoplanets — called “hot Jupiters” — are located oddly close to their host stars. Although at least part of the reason we’ve detected so many hot Jupiters boils down to observational biases, this significant sample of weird planets still raises questions about how planets form.

For one: How do hot Jupiters get so close to their host stars? The classical theory of planetary formation — based on our own solar system — suggests that planets basically form in the same place where they live their whole lives. But partly due to the sheer number of hot Jupiters we’ve seen around other stars so far, modern planetary formation models strongly suggest that large planets undergo great migrations that bring them closer to their stars over time.

During these migration periods, there’s a lot of gravitational jostling for position. And that cosmic mosh pit only intensifies as a planet reaches its final destination near a star. According to the new research, when a planet gets too close to its star, the star’s gravity can eventually eject some moons into orbits around their central star— changing their title from moon to ploonet.

That is, of course, if the moons don’t crash into their planet or host star first. However, based on the team’s new simulations, nearly 50 percent of ejected moons can temporarily survive in stable orbits around their host stars after being booted from their planetary orbits. Additionally, if newly-minted ploonets manage to pick up a bit of mass from the disk of gas and dust surrounding their host star, the ploonets can eventually morph into “fully-fledged small planets,” the authors write.

Though ploonets don’t seem to stick around forever, simulations show that a small percentage can persist for hundreds of millions of years. So, because at least some ploonets can linger for a while, the researchers think that past and current exoplanetary surveys should be able to spot them. “Since the time-scales of our phenomenological model are likely an underestimation of the actual time-scales,” the authors write, “these results imply that the probability of observing a ploonet during these transient processes is relatively high.”

Have We Already Found Ploonets?

Although there has yet to be a definitive detection of a ploonet orbiting a star, there are at least a few examples that might fit the bill. The evidence for these potential ploonets comes from perplexing exoplanet observations that have yet to be adequately explained.

For instance, the researchers of the new paper describe how “moon-star collisions could explain the anomalous spectroscopic features of the stars Kronos and Krios (HD 240430 and HD 240429), which show deep traces of heavy elements.” This is because ploonets are likely made up of largely volatile material — which are light elements and compounds like hydrogen and water that rapidly evaporate — and because ploonets are located so close to their host stars, which exposes them to very strong stellar radiation.

According to the authors, this means that over millions of years, a ploonet will lose a significant chunk of its lighter elements, leaving behind a rather heavy-metal ploonet. If these metal-rich ploonets are then absorbed into their host star, they can produce observational signals that suggest the star instead devoured rocky planets, as may be the case with Kronos.

Similarly, a disintegrating ploonet may also explain other strange features found in exoplanetary observations. According to the authors, such observations include “the puzzling behavior of the lightcurves of KIC-8462852 (Tabby’s star) … or the hypothetical exocometary signatures around KIC 12557548 and KIC 3542116. All of these processes, along with their underlying physical mechanisms, still await a proper understanding in the context of planet, moon, and ring-formation theories.”

Though this new research investigated the possibility of ploonets being responsible for some of the stranger exoplanetary light curves observed so far, the authors point out that more research is needed to identify exactly what a ploonet’s signature will look like. When this is pinned down, other researchers can then search through data from Kepler, TESS, and the upcoming James Webb Space Telescope to pick out possible ploonet sightings.

Only then will we know for certain whether ploonets are an interesting hypothetical, or a previously overlooked class of real cosmic objects — one that our moon may join billions of years from now.