If you look west after sunset, you'll probably spot the fourth brightest object in the sky*: Venus. 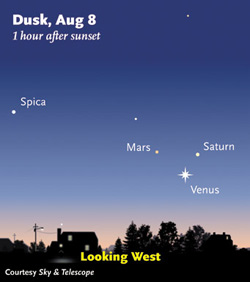 But as I looked west recently, I noticed two bright(ish) objects just above it. It didn't take me long to figure out that they were the planets Saturn and Mars. Both looked red due to their low altitude above the horizon, and both were about the same brightness, so I wasn't sure which was which. Happily, Sky and Telescope has a map (shown here) and a write-up of what's what. Interestingly, although Saturn is far larger than Mars, it's much farther away, so they appear to be about the same brightness in the sky. All three of these planets will change their positions noticeably over the next few weeks, so you can watch as the dance of gravity morphs their configuration. Also, on August 12 and 13, the crescent Moon will slide past the trio, which should make for a very nice photo opportunity. Not only that, but if you stay up late, you can catch the Perseid meteor shower as well. I'll have more about that later. But until then, even people who go to bed early can spot and appreciate the view to the west.

^* The first three being the Sun, the Moon, and the International Space Station.