Pigeon Poop And Strange Static: How We Proved The Big Bang 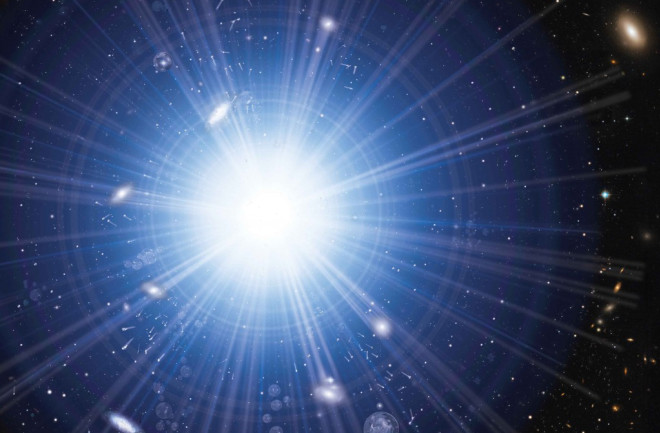 Our universe was born in the Big Bang. But confirmation of this incredible theory came as a surprise to its discoverers. (Credit: Astronomy/Roen Kelly)

Sometimes scientific discoveries are made in world-class laboratories, when brilliant scientists come together to prove a wonderful idea true with fresh experiments. And sometimes, the secrets of the universe are hidden under a pile of pigeon poop.

And so it happened that the first observation of the crackle of nascent energy left over from the Big Bang was not some long-sought holy grail of science. Instead, it was an annoying bit of static mistaken for bird droppings. Such is the lofty origin of the Cosmic Microwave Background energy, the Big Bang’s still-reverberating echo.

In the middle of the 20th century, two theories competed to explain the creation of the universe. In one corner, advocates of the Steady State Theory argued that the universe was eternal, looking the same at all times and in all places, as long as you zoomed out far enough.

But the stronger case was for the Big Bang, which at the time specified a finite universe, expanding from a single point in space. Much of the support for the theory came from Edwin Hubble, who had already observed that the universe was expanding. His observations fit the Big Bang model well, painting the picture of a balloon expanded from nothing and still inflating. But hard evidence for the Big Bang remained lacking.

Then, in 1964, a trio of researchers at Princeton – Robert Dicke, Jim Peebles and David Wilkinson – hypothesized that if the Big Bang theory was correct, it should have produced an amazing burst of radiation still visible today. After traveling for 13 billion plus years, it would be red-shifted to very long wavelengths, probably appearing as radio waves. They busied themselves collecting instrumentation and creating an observing plan to capture this tireless signal. They also doubtlessly thought about what a coup it would be to prove the origin of the universe – big enough to win them fame and very probably the small fortune due a Nobel Prize winner.

The Holmdel Horn antenna in New Jersey was originally built as part of an enterprising communications satellite program. It became far more famous for its collection of data from the universe's earliest moments. <span italic='true'>(Credit: NASA)</span>

The Holmdel Horn antenna in New Jersey was originally built as part of an enterprising communications satellite program. It became far more famous for its collection of data from the universe’s earliest moments. (Credit: NASA)

Meanwhile, 40 miles away, also in New Jersey, two researchers with Bell Labs named Arno Penzias and Robert Wilson were in pursuit of more mundane signals. Using the 50-foot-long Holmdel Horn Antenna, they were trying to measure the radio waves emanating from galaxies beyond our own Milky Way. Even 50 years ago, our local radio waves were busy, and Penzias and Wilson spent time sifting out the chatter of broadcast radio and military radar, not to mention the constant roar of the sun, in order to make out the fainter extragalactic signals.

But even after removing the obvious interference, a noisy hum remained.

They pointed their telescope toward New York City, and then away again, but the signal was unchanged. So it wasn’t the Big Apple.

They considered the Milky Way, since they were after all looking for signals from galaxies. But the noise didn’t change no matter where they looked in the sky – at the Milky Way’s heart or into the darkness beyond.

But instrumentation itself can be noisy, they thought, since all machinery vibrates, gives off heat, or otherwise creates signals just by existing and doing its job. Penzias and Wilson cooled their receiver with liquid hydrogen to soothe away these signals, yet their hum persisted.

Finally, acknowledging even more worldly flaws, they took a look at the radio antenna itself. Unlike telescopes that look at optical light, using mirrors carefully shielded from the elements and kept free of any imperfections, radio telescopes are usually robust instruments kept out in the open.

In the case of the Holmdel Horn Antenna, a group of pigeons had taken to roosting in and around the instrument. Apparently lacking graduate students or other lackeys, Penzias and Wilson rolled up their sleeves and applied their expertise to rooting out pigeons. The metal cage they used to trap the winged trespassers is now in residency at the National Air and Space Museum. Once the pigeons were ousted, the researchers had to remove their nests and droppings, which certainly muddied the look of the experiment.

It’s easy to imagine their frustration when they saw the signal still humming along in their observations. Perhaps they threw something, and then poured a stiff drink. The official record doesn’t specify, so imagine what you like.

From Noise to Nobel Prize

Finally, because New Jersey’s physics world is only so large, the Princeton group heard about the Holmdel group’s noise problem. They visited, and found that completely by accident, Penzias and Wilson had discovered the very signal Peebles and his colleagues had been looking for.

One can probably imagine more drinks and thrown objects, though again, the record is silent. What we do know is that in the spirit of true scientific cooperation, the two groups simply agreed to publish simultaneously. Penzias and Wilson wrote about their persistent signal, and the Princeton group wrote the theoretical explanation.

The horn antenna that first whispered the Big Bang’s secret is now a registered historical landmark. Google reviews currently give it 4.7 stars out of 5. They don’t mention whether the pigeons have returned.