Pic of the Shuttle reentry... from space!

The Space Shuttle mission STS-130 ended last night with the Orbiter Endeavour safely landing in Florida at 10:20 p.m. Eastern time yesterday. I live-tweeted the event, and so I was too busy to pay much attention to the Twitter feed from Soichi Noguchi, an astronaut onboard the International Space Station. I wish I had, because then I could've retweeted a picture he took that is simply amazing: 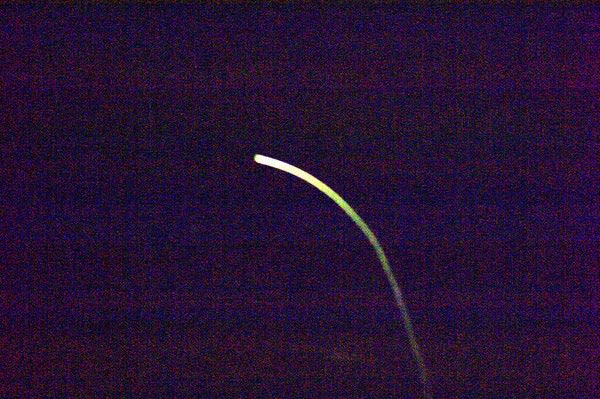 That's Endeavour as it was over (I believe) the Caribbean Sea. At that point, it was still sloughing off the energy of orbit, dropping in velocity as it dropped through our atmosphere. To do that, it made two wide, curving, banking turns, called S-turns, that slow the Orbiter down. As it's doing that, it's ramming the Earth's air at something like Mach 25, which violently compresses the gas and heats it up. This is what causes the Orbiter (as well as incoming meteors) to glow, not friction. The more you know. Anyway, the glow is bright enough to be seen in the Space Station, if it happens to be overhead at that time -- and that doesn't have to be the case; it depends on how long it takes after the Orbiter undocks from the ISS before it lands, for example. In this case, though, Soichi was on the ball, and snapped this shot of Endeavour while it was still glowing hotter than the surface of the Sun! Like I said, amazing. As far as I know, that's the first time this has been photographed from space. And we'll only get four more chances... but after that, maybe it'll be a Dragon capsule they'll see.