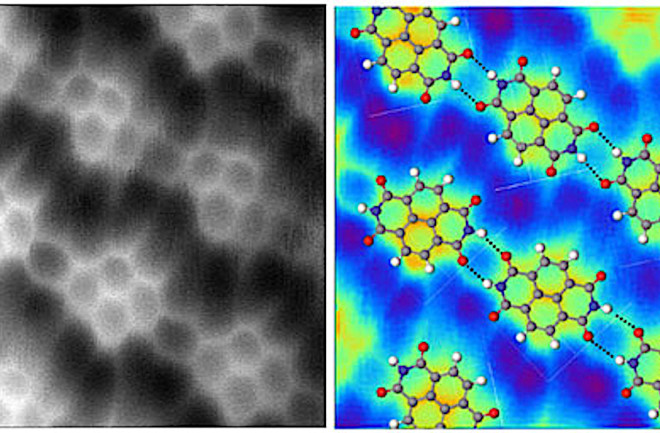 Scanning a material at atomic scale (left) reveals the contours of individual molecular bonds. It's tempting to think of the atoms as classical-style tinkertoys (right), but reality seems to be much more subtle. (Credit: Sweetman et al in Nature.)

In my two previous Out There posts, I showcased starkly different ways of interpreting quantum mechanics and, by extension, two starkly diffent ways of understanding the relationship between us humans and the universe around us. Sean Carroll at Caltech argues on the side of the Many Worlds Interpretation, which holds that reality is constantly splitting off into different versions. Chris Fuchs at the University of Massachusetts at Boston speaks out on behalf of QBism, an interpretation which observers participate in a single reality through interaction with their surroundings.

But these are far from the only possible ways to make sense of quantum mechanics. The varied ideas are complicated and subtle, but what I find fascinating is the concrete concerns that motivate them. Theoretical physicists want to know the same kinds of things that you and I want to know (well, I do at least). Can there be other realities, or is this the one and only? Are we passive participants in the universe, or are we fundamentally connected to the rest of the universe?

During my reporting, I received a passionate response from renowned physicist Sir Roger Penrose, emeritus professor at Oxford University, who has been pursuing an idea known as objective reduction. He believes that there is a real, observable process that occurs when a quantum object interacts with its surroundings and "collapses" into a specific, measurable location. I also had a short but pointed exchange with Robert P. Crease, a historian and philosopher of science at Stony Brook University in New York. He focuses on the philosophical meaning of quantum mechanics. (For more of his views regarding the meaning of science, see his recent book, The Workshop and the World.)

Both Penrose and Crease reject the Many Worlds Interpretation, though for quite different reasons. Both are also committed to connecting physics with human experience. Read on, and don't worry if their answers make your head spin a little.

These days, many physicists consider the Many Worlds Interpretation the default understanding of quantum mechanics. Why do you disagree?

The Many Worlds Interpretation is where you are led if you believe that the laws of quantum mechanics are sacrosanct. To me, this is a reduction ad absurdum. If this is where we are led, then we must change the rules laid down by quantum mechanics.

I could never understand why so many theorists are so adamant that the laws of quantum mechanics must not be changed. After all, at least four of the most prominent of the founders of quantum mechanics were of a different mind: Albert Einstein, Erwin Schrödinger, Louis de Broglie, and even Paul Dirac. I discuss this in section 4 of my book Fashion, Faith, and Fantasy in the New Physics of the Universe.

Is it possible to describe “objective reduction,” your alternative way of understanding what happens when we measure an object and observe it collapse from many possible physical states into a single reality?

There are many objective reduction theories. My own strong opinion is that the rules must change when gravity is involved. The Hungarians Frigyes Károlyházy and Lajos Diósi have proposed such schemes. My own ideas are along those lines, but I tend to emphasize the incompatibilities between the foundational principles between general relativity and quantum mechanics—most particularly an incompatibility between the Galileo-Einstein relativity principle of equivalence (that is, between gravity and acceleration) and the quantum mechanics principle of linear superposition.

There is a fundamental tension here, which can be resolved by a suitable gravitational objective reduction theory. The arguments for such a tension are compelling, and I have never seen a counter argument to these reasons. Explaining them in lay language is not easy. But the implications, in rough terms, would be that if we try to put a sizeable object into a quantum superposition of two locations at the same time, then it would spontaneously jump to one location or to the other in an average time that can be calculated from the theory.

Sir Roger Penrose never exists in two places at once, and he'd like to know why. His theory is that gravity rapidly causes large-scale objects to observe classical rather than quantum behaviors. (Credit: David Berry)

Is there a way to put objective reduction to the test—to catch objects in the act of collapsing from one state to another?

If the superposition were between Schrödinger’s dead and live cat, the jump to one state or to the other would occur virtually instantaneously [because a cat is so large from a quantum perspective]. If it were between a grain of sand in two locations at once, the jump to one or the other would be almost (but slightly less) instantaneous. On the other hand, for a proton, it might be about the age of the universe. For a feasible experiment, to see the effect, we would need something of intermediate mass.

Have you made any progress in doing the experiments that could distinguish between objective reduction and the Many Worlds Interpretation?

Yes, indeed; Dirk Bouwmeester (jointly of Leiden University in the Netherlands and the University of California at Santa Barbara) has been working on such an experiment for well over a decade, and he fully expects to have a definitive test of gravitational objective reduction in the next couple of years; his predictions have been pretty consistent so far.

I am not sure of the size of object that he is currently aiming to put into a superposition of two places at the same time, but he had previously been talking about this being a tiny mirror, whose dimensions would be around one tenth of the thickness of a human hair, and this tiny mirror would be put into a quantum superposition of two slightly different locations at once. The reduction to one location of the mirror or the other would (according to gravitational objective reduction theory) takes place in a timescale of seconds or minutes.

There are other suggestions for such experiments, including one being suggested by a colleague of mine, Ivette Fuentes at the University of Nottingham. She proposes to run a test using Bose-Einstein condensates. But the Bouwmeester experiment is the one that has been developed far the furthest so far.

You have spoken critically about the Many Worlds Interpretation as a meaningful scientific concept. Do you think it more properly belongs in the realm of philosophy?

The Many Worlds Interpretation—at least the way it’s been promoted—doesn’t even belong in the realm of philosophy, because it relies on unquestioned and silly notions about things like “world” and “reality.”

Can Many Worlds or QBism be useful quantum interpretations if they don’t explain everyday experience—namely, why I feel like I’m the one any only version of myself?

To interpret something like science philosophically means to connect the terms of its language with human experience. You can’t do that with Many Worlds. You can with an alternative interpretation like QBism, though it takes some work.

Is it a problem that physicists have not managed to settle on a single, definitive interpretation of quantum mechanics? What do you see as the way forward?

Look, it’s not a problem that physicists haven’t been able to settle on an interpretation. No amount of scientific work will succeed in doing that. It’s a job for philosophers. Physics is a highly complex activity made possible by concepts and convictions that sometimes collide, resulting in paradoxes and problems that cannot be solved by throwing more physics at them.

Physicists can cover over these paradoxes and problems in a rough and ready way with makeshift ideas like the Copenhagen Interpretation, but that doesn’t make them vanish. You need systematic critical reflection, which is what philosophy is all about.