Endless Versions of You in Endless Parallel Universes? A Growing Number of Physicists Embrace the Idea.

The Many Worlds Interpretation of quantum mechanics holds that reality is constantly splitting. 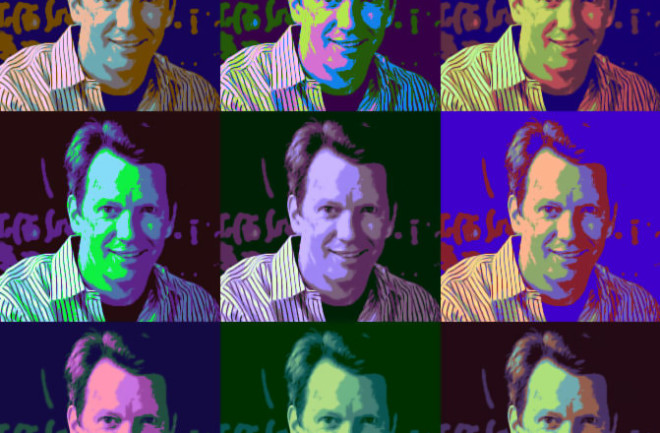 Many words, many versions of physicist Sean Carroll — and everything else. (Credit: Bill Youngblood/Corey S. Powell)

Conventionally speaking, there is a single physicist named Sean Carroll at Caltech, busily puzzling over the nature of the quantum world. In the theoretical sense, though, he may be one of a multitude, each existing in its own world. And there’s nothing unique about him: Every person, rock, and particle in the universe participates in an endlessly branching reality, Carroll argues, splitting into alternate versions whenever an event occurs that has multiple possible outcomes.

He is well aware that this idea sounds like something from a science fiction movie (and it doesn’t help that he was an advisor on Avengers: Endgame). But these days, a growing number of his colleagues take the idea of multiple worlds seriously. In his new book, Something Deeply Hidden, Carroll proposes that the “Many Worlds Interpretation” is not only a reasonable way to make sense of quantum mechanics, it is the most reasonable way to do so.

Prominent supporters of the Many Worlds Interpretation include physicists David Deutsch at Oxford University and Max Tegmark at MIT. If they are right, our intuitive sense of how reality works is profoundly wrong. Then again, some other researchers think that the Many Worlds way of looking at quantum mechanics is misguided, unproductive, or even downright absurd.

To make sense of how the Many Worlds Interpretation works, and what it means for our understanding of the universe, I had a long and mind-bending conversation with Sean Carroll. A slightly condensed version of it appears below. Then in my next blog post, I will share a drastically different perspective on quantum mechanics. The stakes are high in this debate: What’s being contested here is nothing less than the nature of reality!

Q: Let’s begin at the beginning. What is the Many Worlds Interpretation?

Carroll: It starts with quantum mechanics, which is our best theory of elementary particles and the microscopic world. There’s this thing in quantum mechanics that says, before you look at an object it’s not in any definite location. It’s in a wave that you can think of as a superposition [overlap] of all the different locations it could be in. So it might be more likely than you observe it in one place or another, but it’s not actually located at any particular place until you observe it.

It’s really weird to think that the behavior of this thing is different depending on whether you’re looking at it or not. That’s the fundamental weirdness of quantum mechanics: that objects behave one way when you’re not looking at them, in another way when you are.

Q: Agreed, quantum physics is weird. How does the Many Worlds Interpretation help you make sense of it?

A: Many Worlds says that what actually happens when you look at the electron, it’s not that there’s some sudden transition where boom, it’s in one location that happens to be where you saw it. Instead, it’s that the world branches into copies — one where the electron was here and you saw it here, another copy where the electron was there and you saw it there, and so forth. This is not just wild speculation, this is exactly what is predicted by the fundamental equation of quantum mechanics, the Schrödinger equation.

Everyone agrees that quantum systems obey the Schrödinger equations when you’re not looking at them. Many Worlds just says that they also obey the Schrödinger equation when you are. Every other approach to quantum mechanics has to make things more complicated by saying, no, there’s something special that happens when you look at them. Maybe that’s possible, but if there’s no need for that — if there’s no empirical benefit to saying that, and there’s no metaphysical benefit to saying that — then why say it?

The formulation of the Many Worlds Interpretation is the simplest version of quantum mechanics that there can be. The price you pay is that there are a lot of worlds. But that’s like saying, there’s an infinite number of numbers in the number line. That doesn’t stop us from using the concept of a number line. Likewise, in quantum mechanics there’s one concept, the wave function obeying the Schrödinger equation. You can’t get simpler than that.

Q: Let’s say I accept that Many Worlds applies to electrons and atoms. How does it apply to people? Do we keep getting new copies of ourselves?

A: It’s all the same. Many Worlds says, look, if an electron can be in a superposition, you can, too. You’re made of electrons, atoms, and stuff like that, so you can be in superposition.

A: It’s almost valid, with a couple footnotes. One is that the crucially important point that the worlds don’t branch because you made a decision. The one thing that is great about the Many Worlds Interpretation is that it’s absolutely unambiguous about when worlds do branch, which is when a small quantum system that is in a superposition becomes entangled with the wider world. This is, again, something that is just described by the Schrödinger equation. You don’t have to use words like “measurement” or “observation” at some fundamental level to define it. You can derive it.

The famous Schrödinger’s Cat thought experiment could be an example of how the universe splits. The living and the dead cats may both exist, but in separate realities. (Credit: Christian Schirm)

Q: I want to come back to that word “entangled.” What exactly does it mean, and how do you know when something is or isn’t entangled with the world around it?

A: That’s a great question, and here’s the problem. Mathematically, I can define it in two seconds; it’s very easy. If you want me to define it in words, then I have to use words like “were you to observe it …” Here’s a key point. There’s never just a single electron. It has a wave function, which means it’s spread out all over the place, meaning it’s in a superposition of being in different places. The same thing is true for every electron in the universe. There’s only one state for the whole universe.

We call it, cleverly, the “wave function of the universe.” Hugh Everett, who invented the Many Worlds Interpretation, was one of the people who first pointed this out. If you interpret this wave function as telling you about what the possible observational outcomes are, they can be correlated. You might not know where one electron is, and you might not know whether the other electron is, but you know that they’re in the same place. Then if you observe one, you know where the other one’s going to be. That’s what entanglement is.

Q: That’s a tough concept, at least when you put it into words. Since there are an awful lot of particles getting entangled all the time, are there an infinite number of versions of the universe?

A: We don’t know whether the number of worlds is finite or infinite. That’s not something that the state of our knowledge is good enough to answer. I think that physicists should be kind of embarrassed that they haven’t thought about this harder. It’s certainly a very large number of worlds, let’s put it that way. There’s no way it’s like … five. It’s definitely a bigger number than that.

Q: How should we interpret all those different worlds? Are they all equally real?

A: They all have equal validity, but validity is not really the right word here. Some branches of the wave function — some worlds — count for more than others. That’s why, when we observe a quantum system, we can say, well, there’s a two thirds probability of seeing this but only a one-third probability of seeing that. There’s more weight attached to the one possibility than the other.

The single biggest worry about Many Worlds is that it can’t answer the question of where the probabilities come from. But this is all perfectly well-defined mathematically.

Q: I can’t help noticing that we experience one reality, one world only. Why is that? Where do all the other worlds go?

A: You mean, Why you find yourself in one world rather than any other? Well, what other one would you find yourself in? It’s like asking, given all the time that existed in the past and will exist in the future, why do we live now? Everyone at every moment thinks they live “now.” Everyone in every world thinks that they’re in the one and only world. I don’t know how else it could be.

Q: Knowing that those other realities exist naturally makes me wonder whether it’s possible to cross over and visit one of them, the way you see in science-fiction movies. Could you do that?

A: You can imagine what you’d like to do it, but it’s not physically possible. It’s like traveling faster than the speed of light: It’s not something that you can actually do. This is exactly why the different parts of the quantum wave function count as separate worlds. Once they come into existence, they go their own way. They don’t interact, they don’t communicate, they don’t influence each other in any form.

Q: How do you reconcile Many Worlds with conservation of energy? Aren’t you constantly bringing new worlds into existence?

A: It looks like you’re creating extra copies of the universe, but energy is actually 100 percent conserved in Many Worlds. You’re not really creating new universes. It’s better to think of it as taking a big, thick universe and slicing it, differentiating it into multiple copies, each one of which is thinner than the other one. That’s a rough, intuitive analogy, but it’s backed up by the math.

It’s like you take one world and you split it into two. That’s literally the word that Hugh Everett used when he talked about this — he talked about “splitting” the universe. It’s not like a Xerox machine where you now have two copies of what you once had. It’s not like the other worlds are located somewhere.

A: Yeah. I want to emphasize that it’s not your decisions that make the universe branch. But it’s absolutely possible that something happens in your brain that branches into two different quantum possibilities, and we interpret those differences in the macroscopic world as different decisions being made. So it’s absolutely possible that there are multiple worlds where you made different decisions.

There is an app you can download for your iPhone that will offload your difficult decisions to a quantum measurement device. If you have two choices to make, you can just send it to this app, cleverly called Universe Splitter, and it will tell you which branch of the wave function you’re in. It’s fun to think about, but if you could experience other versions of yourself, they wouldn’t really be other worlds.