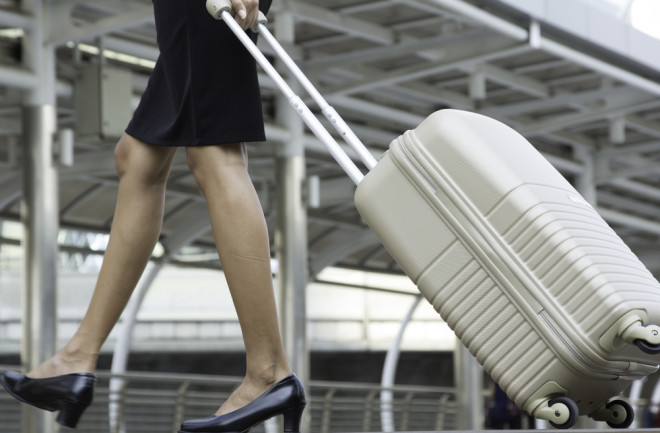 Rolling luggage is both a blessing and a curse for hurried travelers. While we no longer need gym-toned biceps to heft our sundries through the airport, the slightest misstep can send a two-wheeled suitcase rocking and spinning into an uncontrollable disaster. Now, scientists think they know why rolling suitcases are so annoyingly unsteady at exactly the wrong times.

French researchers, writing in the Proceedings of the Royal Society A, say that the problem comes down to simple physics. A rolling suitcase is inherently wobbly because the force we apply at the handle is misaligned with the wheels. Suitcase handles are inside of the wheels, so when luggage gets perturbed — by a bump or sudden turn — the handle pulls the suitcase inwards. Done with enough force, this leads to an overcorrection, and the suitcase tips in the opposite direction and back again, potentially leading to catastrophe. In some cases, the stabilization offered by having both wheels briefly on the ground is enough to right a suitcase, but only if we’re not pulling too hard.

Watch a video demonstration from the researchers here.

The researchers tested their hypothesis with a simplified model of a suitcase consisting of a handle, two wheels, and an arm with weights on each end. With this setup, they were able to see how rolling luggage reacts to a range of disturbances at different speeds. Their results were not all intuitive. For example, they found that while higher speeds mean that smaller bumps can throw off the suitcase, they actually decreased the chances of it tipping over. This is because when pulling forces are greater, the suitcase’s motion is transferred to a back-and-forth fishtail rather than a rocking motion. So, while your suitcase may skid around when you’re hurrying through the airport, it’s actually less likely to tip over when you run to catch a flight. This also means that the correct response to a rocking suitcase is to go faster, rather than slower — not the way luggage newbies would react.

If you want to decrease the rock and roll even further, you could always just buy a suitcase with a square handle that attaches to both sides of the case, reducing the inward-pulling motion. Or, if you’re not willing to buy new suitcases, the researchers have a more simple solution: just keep the handle lower to the ground. As The Guardian writes, that means less pull inward when the suitcase rocks and even greater stability.