Physicists Find Hints of Dark Matter But No Clear Discovery 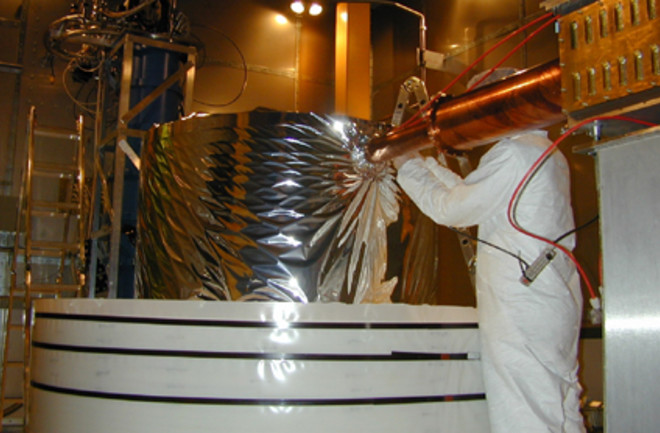 If you were following Cosmic Variance yesterday, you saw its live blogging of one of the most anticipated recent announcements in physics: the team from Cryogenic Dark Matter Search (CDMS) telling the world whether a Minnesota detector spotted evidence of dark matter. The answer? Maybe (pdf). CDMS scientists use super-cooled detectors made of germanium and silicon to search for weakly interacting massive particles (WIMPs), one of the leading suspects for what could make up dark matter. The detector is deep underground in the Soudan mine in Minnesota, which scientists also use to hunt for neutrinos.

WIMPs streaming in from space would very rarely jostle the germanium nuclei, some 800 meters underground in the Soudan mine, generating a tiny amount of heat and slightly altering the charge on the detectors in a characteristic pattern [Science News]

. In 2007-2008, CDMS researchers saw two events that could have been WIMP interactions. Because their calculations had suggested a likelihood of 0.8 jostling events for the two years just from radioactive decay of regular matter, that means there's a decent chance—but far from a certainty—that they saw dark matter interactions.

The team is not claiming discovery of dark matter, because the result is not statistically significant. There is a 1-in-4 chance that it is merely due to fluctuations in the background noise. Had the experiment seen five events above the expected background, the claim for having detected dark matter would have been a lot stronger [New Scientist]

. Dark matter is the hypothetical stuff that physicists believe to be far more abundant than the matter that makes up you and me.

It seems that ordinary matter - gas, stars, planets and galaxies - makes up less than 5% of the Universe. The remainder is unseen [BBC News]

. Dark matter and dark energy—which is even more mysterious and plentiful than dark matter—constitute the rest, scientists think. Next year the CDMS team will upgrade its detector for further experiments, and the bevy of scientists working with the Large Hadron Collider will be champing at the bit to use this new data when they resume their work in the new year, Dan Tovey of the LHC's ATLAS project says.

"The really exciting aspect of all this is that if you see a signal in a direct-detection dark matter experiment and a signal for supersymmetry at the LHC, you can compare those two observations and investigate whether they are compatible with each other," says Tovey [New Scientist]