Scientists hunt for the unseen matter that glues together the cosmos. But some wonder whether it even exists. 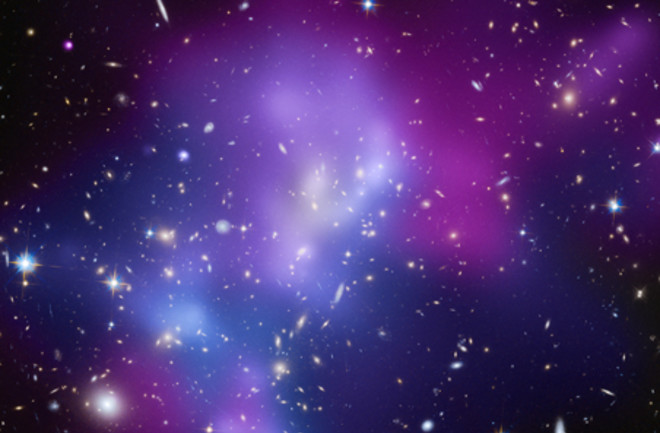 The Galactic CushionThe Hubble Space Telescope recently beamed back pictures of 29 dwarf galaxies in the Perseus Cluster that, by all appearances, should have been torn to shreds by the gravitational tidal forces of their giant neighbors. Instead, like islands of calm in a stormy sea, the little galaxies remain stable and intact. A team of European astronomers says the secret to their cohesion is a cushion of dark matter that protects them from the gravitational tug-of-war outside. Dark matter, believed to be particularly abundant in dwarf galaxies like these, counteracts the pull of the nearby giants, leaving the smaller galaxies in peace.

Hubble’s findings mark the next step in a major research effort aimed at understanding some of the strangest stuff in the cosmos. Dark matter neither emits nor reflects light and cannot be observed directly, posing a challenge for scientists. Although dark matter is thought to be five times as abundant as “normal” matter, finding enough to study has proven difficult.

Despite more than 75 years of research, the nature of dark matter remains one of the biggest open questions in astronomy. Cosmologists believe dark matter interacts with regular matter—familiar protons, neutrons, and other particles—only through gravity. If dark matter hobnobs with normal matter through other forces, science has so far failed to turn up any evidence of it. All the data are indirect, therefore: Astronomers can see how this invisible material pulls and twists galaxies, but they cannot explain its workings.

Its Own OppositeWhile some researchers parse the motions of galaxies in their search for dark matter, others are hunting for evidence in the form of telltale particles. In April, an international team using a satellite-borne detector called PAMELA (Payload for Antimatter Exploration and Light-nuclei Astrophysics) found a glut of high-energy particles called positrons, which may be a product of dark matter. According to one theory, dark matter particles are their own antiparticles—meaning that, if one smashes into another, both are obliterated. These high-energy collisions should produce electrons and positrons, which may be the source of the positron abundance turned up by PAMELA.

An Ether-Like WindPhysicist Jocelyn Monroe at MIT is working on a detector designed to measure the dark matter “wind.” As Earth moves around the sun and the sun moves around the galactic center, our planet passes through dark matter. The motion, Monroe explains, should create a detectable breeze of dark matter particles, like holding your hand out of a moving car.

Fins on a RocketAt the Harvard-Smithsonian Center for Astrophysics, astronomer Warren Brown employs yet another tactic in the hunt for this invisible target. “There are interesting observations to be done with the objects you can see,” Brown says. For the last few years, he has studied a gaggle of extremely fast-moving stars, stellar runaways that were long ago flung out of the Milky Way by the massive black hole at its center.

Brown says that the movements of these stars could reveal the shape of the dark matter halo around our galaxy. The stars started in the center and passed through much of the Milky Way’s dark matter as they moved outward—which means their paths were shaped by the dark stuff’s gravitational pull. By tracing the stars’ trajectories backward, Brown’s team hopes to understand our galaxy’s gravitational profile.

Meanwhile, particle physicists are building experiments designed to find the elusive particle or particles of dark matter right here on Earth. Though such particles might be ubiquitous, the effort to find them faces an uphill battle. “Billions of them may go through your head every second,” says astrophysicist Ed Shaya at the University of Maryland, adding, “The question is, what is the particle, and where does it fit in our models?”

Mining for Dark Matter, Seeing It in Crystals, and Actually Producing the StuffCurrently, the strongest candidates to be dark matter particles are Weakly Interacting Massive Particles, or WIMPs. In abandoned mines in Minnesota and Ontario, researchers have built WIMP detectors designed to pick up the weak response when a dark particle strikes an ordinary atom. In Italy, the DAMA/LIBRA experiment, designed to detect dark matter particles hitting atomic nuclei in large crystals, recently picked up strong signals that may be the first blip of dark matter, but the results have yet to be verified. The Large Hadron Collider (LHC) near Geneva, Switzerland, aims to re-create conditions of the early universe when it comes back online later this year. If dark matter was born right after the big bang, it may resurface in the LHC—and physicists might get a glimpse.

Scientists have struggled to investigate dark matter since 1933, when astronomer Fritz Zwicky observed a cluster of galaxies moving so fast that, like Hubble’s dwarves, they should have been ripping apart. He surmised that invisible matter must be holding them together. In 1980, astronomers Vera Rubin and W. Kent Ford found that stars account for just one-tenth of the mass required to hold a galaxy together; if not for dark matter, galaxies would not exist. But even today, we have only indirect traces of its presence.

Doubting Dark MatterIt may turn out that the hunt for dark matter is a wild goose chase. A few scientists are exploring alternative theories such as TeVeS that try to explain gravitational puzzles without invoking dark matter at all. Even Brown, who aims to map dark matter in our own galaxy, has doubts. “Is it really there? We certainly see evidence of something that cannot be explained by our understanding of gravity,” he says, “but the more time goes on, the more I worry that we have the wrong theory.”

Perseus Cluster A group of more than a thousand galaxies located 250 million light-years from Earth.

Positron A subatomic particle with the same mass as an electron, but bearing a positive charge.