Physicists Achieve Quantum Teleportation Across a Distance of 10 Miles 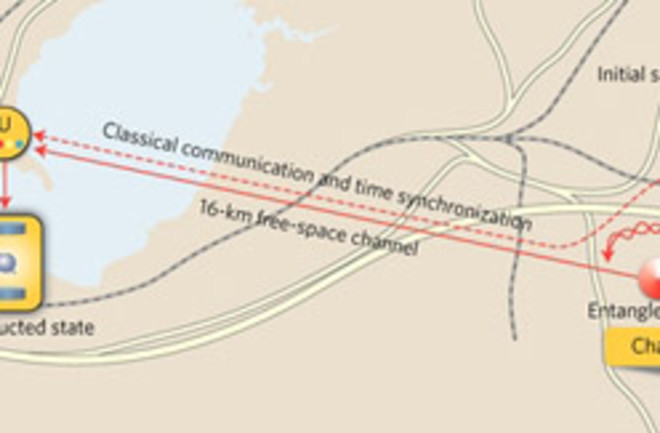 It works by entangling two objects, like photons or ions. The first teleportation experiments involved beams of light. Once the objects are entangled, they're connected by an invisible wave, like a thread or umbilical cord. That means when something is done to one object, it immediately happens to the other object, too. Einstein called this "spooky action at a distance." [Popular Science]

Previous experiments achieved this phenomenon in photons separated by a distance of hundreds of yards, connected by fiber channels. But the physicists in China blew that distance away, and with 89 percent integrity for the information.

In this particular experiment, researchers maximally entangled two photons using both spatial and polarization modes and sent the one with higher energy through a ten-mile-long free space channel. They found that the distant photon was still able to respond to changes in state of the photon they held onto even at this unprecedented distance. [Ars Technica]

to make quantum cryptography, a way to encode information that relies on the Heisenberg Uncertainty Principle

, 100 times faster than previous experiments could. Coherence: In quantum coherence, photons can enter a multi-state existence in which they simultaneously travel multiple paths, but then at the end choose only the fastest route (a counter-intuitive talent I wish I possessed). Researchers have found this happens in plants

. That's not the overall record (which is six). But the scientists say their five entangled photons could only choose one of two paths, and that's the kind of system that would someday be used in quantum communication or computing. The quantum state: We don't witness the oddball behaviors of the quantum world on the scale our naked eyes can see, but in March physicists put the largest object ever

into a quantum state.