Physicist Learns Why Moon Dust Is So Dangerous: Static Cling 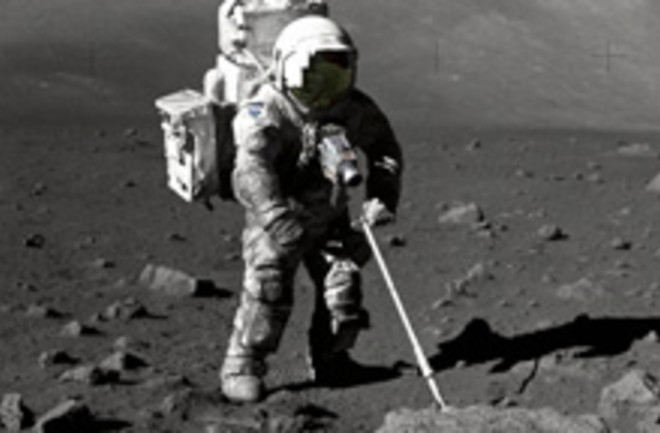 In an attempt to smooth the way for future manned missions to the moon, a researcher who studied lunar dust almost 40 years ago has returned to his data to investigate why the dust behaves in such problematic ways.

Physicist Brian O'Brien worked on several Apollo lunar landing missions from 1969 to 1971, building dust detection devices that were planted on the moon's surface. In 2006 he learned that NASA had lost the original data from those devices and decided to go back through his own set of data tapes from the experiments, to see if anything new could be learned.

"Dust is the number one environmental hazard on the moon, yet its movements and adhesive properties are little understood," said O'Brien [SPACE.com].

Lunar dust generally refers to only the tiniest particles of lunar regolith, the loose blanket of rock fragments that covers most of the moon's surface. O'Brien's new study, which will be published in an upcoming issue of Geophysical Research Letters, revealed that the stickiness of lunar dust varies throughout the course of the long lunar day. As the sun's position on the horizon changes, the amount of ionizing radiation reaching the surface of the moon changes accordingly. In the early hours of the lunar day, the radiation manages to generate an electrostatic charge on individual dust particles—these average only 70 microns in diameter, so it does not take much charge to enable them to overcome the weak force of lunar gravity. Once the Sun reaches a certain position, [the ionization and electrostatic charge decrease,]

the downward pull of lunar gravity takes over, and the dust falls off a surface [Ars Technica].

These results suggest that the solution to the dust problem may be decidedly low-tech:

O'Brien believes that some sort of lunar shack for on-duty moonwalkers may be mandatory to provide for a sunlight-thwarting, dust-free working environment. "It follows that on future lunar expeditions, powerful electrostatic adhesion of lunar dust during the middle half of each lunar day could cause greater dust problems than experienced by Apollo astronauts" [SPACE.com]

, he says. Related Content: 80beats: Lunar X Prize Competitor Hopes to Send a Rover Back to Tranquility Base 80beats: Disappointing News: No Icy Patches in the Lunar Craters 80beats: New Race to the Moon Could Bring Permanent Bases and Observatories DISCOVER: The Space Race for the New Millennium DISCOVER: Can We Survive on the Moon? wonders how settlers would handle that regolithImage: NASA. The suit of astronaut Harrison Schmitt, of the Apollo 17 mission, was covered in dust.