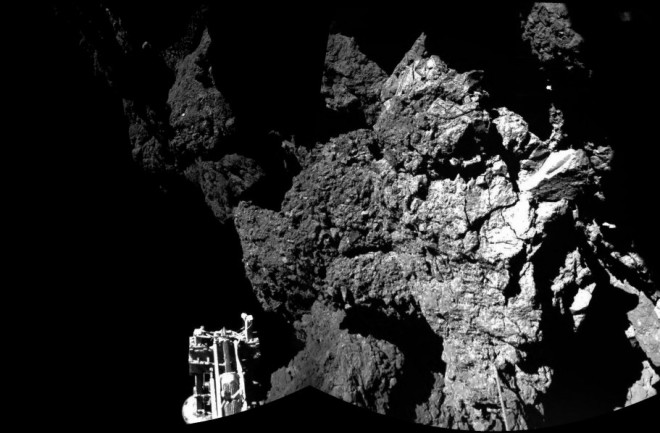 A two-image mosaic captured by Rosetta’s lander, Philae, on the surface of Comet 67P/Churyumov-Gerasimenko. The lander is resting on its side, and one of its three feet is visible in the foreground. (Source: ESA/Rosetta/Philae/CIVA) The first-ever soft landing by a spacecraft on a comet was even more dramatic than originally thought. As it turned out, the Philae lander bounced not once but twice before coming to rest on Comet 67P/Churyumov-Gerasimenko yesterday — on its side.

ESA/Rosetta/Philae/CIVA You can see a part of one of the lander's legs in front of a cliff on the surface of the comet in the mosaic of two images above. Controllers believe only two of Philae's three legs are in contact with the surface. Click the thumbnail at right for a panorama of images with an illustration of the lander superimposed to see the lander's orientation. Because 67P's gravity is so slight, on the surface Philae weighs about as much as a few ping pong balls would on Earth. With this in mind, the lander was supposed to fire harpoons into the surface to help secure it. Ice screws in the probe's feet were supposed to help lock it to the surface as well, while a thruster atop the lander was supposed to help push it down to counteract the force of the harpoons, which would have tended to push it back up into space. But according to the European Space Agency, which launched the $1.75 billion, 4-billion-mile mission, the harpoons apparently failed to fire, and so the lander bounced back up to a height of about a kilometer, or a little over a half mile. It took two hours for Philae to gently drift back down — and then it rebounded again, but this time to a much lower altitude. When it landed again, it settled on its side. Because of that orientation scientists are worried that Philae's solar panels will not be able to generate enough electricity to keep it operating much beyond the 64 hours provided by onboard battery power.