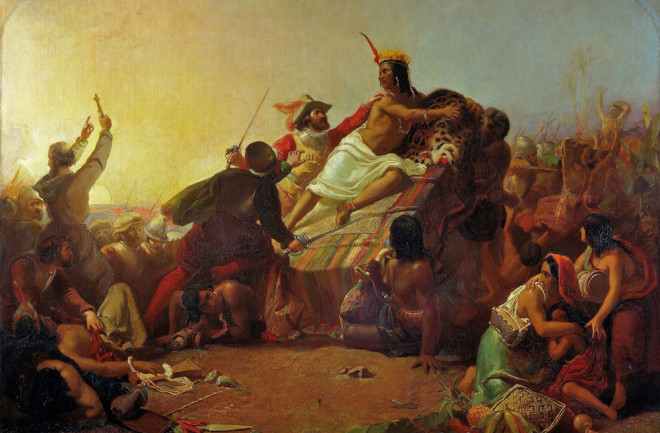 Late one November afternoon in 1532, Atahualpa, the ruler of the Inca Empire, approached Cajamarca, a town couched in a valley of the Peruvian Andes, to meet with a small band of foreigners. His empire stretched from modern Ecuador south, between the Pacific and the Andes mountains, to central Chile. Having just won a costly but decisive victory against his brother in a battle of succession, Atahualpa approached his new visitors without fear. He left the majority of his soldiers, who numbered in the tens of thousands, camped outside the town.

Accompanied by a retinue of several thousand unarmed men, Atahualpa was ceremoniously carried into Cajamarca on a litter. He wore an impressive emerald collar, while the lords, counselors and commanders who accompanied him were adorned in richly colored clothing and headdresses of gold and silver.

The Spanish conquistadores awaiting Atahualpa’s arrival were less at ease. Captivated by stories of unimaginable riches told at Spanish court by Hernán Cortés, they had come to South America with the blessings of King Charles V and Queen Isabella to discover and conquer Peru. But in Cajamarca, with only about 160 men and no easy escape route, they grew decidedly jittery.

The leader of the Spanish explorers, Francisco Pizarro, hoped to persuade Atahualpa to submit to Spanish control without bloodshed. But because the Inca emperor’s men outnumbered Pizarro’s by at least 35 to 1, he also planned a surprise attack. In preparation, Pizarro hid soldiers on horseback in low buildings surrounding three sides of the court at Cajamarca for his meeting with Atahualpa.

The precise trigger for the ambush on Atahualpa is lost in history, although some accounts say tensions rose after Atahualpa took offense at the Spanish’s efforts to convert him to Christianity. Whatever the cause, the consequences were ruthless. Although vastly outnumbered, Pizarro’s men had the advantage of surprise, horses and steel swords. They quickly cut down those in the square, capturing Atahualpa and pursuing the fleeing natives into nearby fields. In what became known as the Battle of Cajamarca, the Spanish massacred an estimated 6,000 to 7,000 Inca. The Spanish themselves reported no fatalities.

Thompson’s Ohio State University team returned to the Quelccaya ice cap in the southern Andes in 2003 to drill a new set of ice cores. Last February, a team that included Thompson published an analysis of the Peruvian ice cores. The cores preserve evidence of trace elements in the atmosphere in a way that can be precisely dated by year, like tree rings. Vladimir Mikhalenko/Ohio State University

The captive Atahualpa bargained with Pizarro, proposing an enticing ransom: In just two months, he would gather a room full of gold and another of silver from around his empire. Ultimately, the plan to buy his freedom didn’t work out too well for Atahualpa or his people. Within a generation, growing numbers of Spanish — this time colonists — would flood the continent, rapaciously mining much of the Inca’s land for precious metals, especially silver. Over the next few decades, the Spanish Empire’s aggressive expansion into South America would drastically reshape the culture of the continent. Now, researchers are finding that the Spanish conquest left a physical mark on the environment as well.

Nearly 500 years in the future and some 155 miles away from Cajamarca looms the Quelccaya ice cap, the largest in the tropics. High in the Peruvian Andes, the pristine glacier seems far removed from the bloody events of that fateful day in 1532. But it’s preserved clues to what happened next.

Lonnie Thompson is a paleoclimatologist at Ohio State University. Many agree that his research on ice caps across the world was some of the first, most convincing evidence that current climate change is due to human activity.

Thompson has been making the arduous trek through Peruvian wilderness to the Quelccaya ice cap since the 1970s. Quelccaya is so remote that on one of his first treks to drill for ice core samples, Thompson and his team could not get their drill and generator to the work site. Fortunately, today they have a portable solar-powered drill. On a trip in the 1980s, the team had to bring back ice samples in water bottles because there was no way to keep them frozen. They returned with 6,000 samples.

In February 2015, a team of researchers, including Thompson, published a paper in the Proceedings of the National Academy of Sciences about new findings from the Quelccaya ice core samples. The researchers analyzed the ice cores for different trace elements — such as lead, antimony, arsenic, bismuth and molybdenum — that may have been floating around the atmosphere during different points in time.

Ice core samples from Quelccaya are especially unique because they can be annually dated, Thompson says. In South America, the year is primarily divvied up between the wet and dry season. Each dry season creates a visible layer of dust in the ice, making it possible to see individual years. When researchers drill until they reach bedrock, they can count back the years in the core from the time of drilling.

“It’s like having a very old tree,” Thompson says. “We’ve drilled all over the world, and there’s no place like this ice cap.” Also, because of Quelccaya’s high elevation (about 3.5 miles above sea level), only significant air pollution can reach the ice cap. This means that pollution found in the Quelccaya ice cores is indicative of pollution that affected widespread areas in South America. For example, an increase in lead, which is found and refined alongside silver, might indicate an increase in production of that precious metal.

This experimental clay furnace, or guayra, was one of many built by researchers who were studying mining and metallurgy sites. They were trying to better understand ancient non-ferrous metallurgy in the Andes. This guayra was built in Tilcara, in northern Argentina. Pablo Cruz

Although most ice core research is used to learn more about climate change, a closer inspection of the cores from Quelccaya can also paint a picture of the fall of the Inca Empire and the rise of Spanish colonization. In essence, the Quelccaya ice core samples can illustrate a rough timeline of human activity and history in South America.

What the team discovered was a gradual increase in elements associated with metalworking starting around 1540, less than a decade after the Battle of Cajamarca and the start of Spanish colonization. Thompson believes that these increases seen in the South American ice cap, especially in lead, show the first impact of colonial metalworking activity.

This finding also supports the theory that the Anthropocene — generally defined as the period when human-made environment impacts leave a mark on the geologic record — began at different times around the world, rather than at the start of the Industrial Revolution.

The chunk of the ice core that corresponds to the Inca Empire, about 1438 to 1532, shows a gradual increase in bismuth beginning around 1480, which the researchers believe could mark the spread of a new bronze alloy across the Andes. Any spikes in atmospheric elements before the Inca civilization generally correspond with fallout from volcanic eruptions.

That Inca metallurgy left little record in the ice cap could be attributed to the method for refining metals. The Inca largely smelted silver using a small clay furnace, called a guayra. They were usually set on a ridge for winds to sweep through, like a bellows, and were best for smelting smaller amounts of high-quality silver.

The silver in this figurine was most likely produced in a clay furnace, or guayra. Werner Forman/Corbis

Unlike the Spanish, who traded much of their silver and gold to China, the Inca used precious metals for decoration and ritual items, says Kendall Brown, a historian at Brigham Young University. They created jewelry and lavishly decorated sacred places, such as the Temple of the Sun in Cusco and the Temple of the Moon near Machu Picchu, whose walls were covered with sheets of gold and silver.

However, by the 1570s, the Inca and Spanish ran out of the high-quality ore required for smelting, and silver production crashed. But soon a new method of refining silver made its way to South America from Spaniards living in Mexico. “Up until this time, a lot of the technology had been indigenous technology,” says Brown. “But now it becomes Spanish technology.”

Silver amalgamation, in which ground silver ore is mixed with mercury and salt, quickly replaced the guayra in the Spanish quest to refine silver. Potosí, located in modern-day southern Bolivia, is one of the world’s largest historical mining sites. In 1565, it produced 70 tons (63,000 kilograms) of fine silver using guayras. By 1610, Potosí was consistently churning out at least 143 tons (130,000 kilograms) of silver every year using amalgamation.

The levels of chemicals related to metallurgy in the ice core gradually rose and plateaued over the next few decades, until around 1830. Then, over the next century as the Latin American Wars of Independence heated up, the amount of air pollution decreased. Much of the infrastructure for mining was demolished during many wars of independence in South America.

The Quelccaya ice cores, of course, only tell a sliver of the history of South America. “There’s always interesting new questions that these records raise,” Thompson says. What will ice cores in the next century say about our civilization — will there even be ice caps left to look at? And if not, in what other ways have we subtly marked nature with the story of mankind?

As for Atahualpa, the details of his fate can’t be found in the ice, but are instead preserved in the pages of history books. One evening in late July 1533, the great leader found himself being led back to the middle of that square in Cajamarca, the scene of Pizarro’s pivotal ambush a mere eight months earlier.

There, his Spanish conquerors allegedly converted him to Christianity — then strangled him to death and partially burned his body before giving him a full Christian burial for his people to witness. His ashes alone would leave no trace for future generations to read, but the Inca ruler’s death presaged radical changes to the culture and identity of South America — as well as the environment itself.

[This article originally appeared in print as "Freeze Frame."]