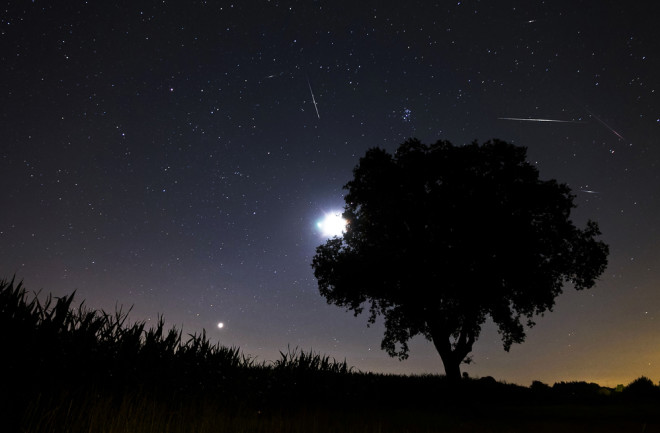 One of the year's best annual light shows is this weekend: the Perseid meteor shower, which will be at prime viewing in North America on the nights of August 11-12 and 12-13.

The Perseids make their appearance every year in early- to mid-August when Earth passes through the remnants of Comet Swift-Tuttle. Those pieces of dust and rock stuck in the comet's orbit ram into our atmosphere at 132,000 mph, burning up in the process and providing a dazzling show.

The Perseids have always been popular---what's not to love about watching shooting stars on a warm summer evening? But last month the reputation of these meteors got anotherboost: NASA announced that, after having analyzed meteor showers over the past few years, the Perseids produce the greatest number of really bright meteors, called fireballs

, of any meteor shower. (Fireballs are meteors at least as bright as the planets Jupiter or Venus.) Those dazzlers will be accompanied by many more dimmer meteors. At the shower's peak this weekend, viewers in dark-sky sites could see 100 shooting stars per hour.

To see the show, look northeast after sunset, in the direction of the Perseus constellation. For timing, NASA meteor researcher Bill Cooke offers this viewing guidance:

Cooke recommends looking on the nights of August 12th and 13th between the hours of 10:30 PM to 4:30 AM local time. Before midnight the meteor rate will start out low, then increase as the night wears on, peaking before sunrise when the constellation Perseus is high in the sky.

The location of the Perseid Meteor Shower in the night sky during its 2013 peak on Aug. 12 and 13. Credit: NASA/JPL-Caltec

And if you take your camera with you, be sure to send us your pictures!