People should stick with "their own kind"

Since the post on anti-miscegenation laws got a lot of attention, I was curious about analogs in the World Values Survey. There are two such questions of interest: Important for succesful marriage: Same ethnic background(D042) and Important for succesful marriage: Religious beliefs(D031) These data are skewed toward European nations. Below the fold are data are % who assert that same ethnic background is NOT very important, or that same religious beliefs are NOT very important. I will admit that the international pattern is surprising to me.

One essential issue here is that "same ethnic background" and "same religious beliefs" can be interpreted differently in various contexts. Perhaps in Finland we are talking about Swedes & Finns, while most British respondents assume that salient difference would be between whites and non-whites. Additionally, in Germany perhaps the religious difference would be between Protestants and Catholics, while in France Muslims outnumber Protestants, so the assumption is that you are referring to Muslims as the partner with the overwhelming Catholic majority. Finally, in some nations such as France there is some polarization between the secular and the traditionally religious. Let's compare the variables against each other: 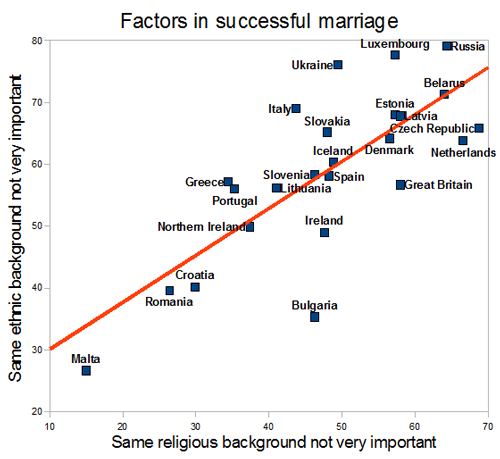 As you can there's a strong relationship between societies where ethnic and religious beliefs are presumed not be important. Nevertheless, you have nations such as Bulgaria where ethnic backgrounds have more weight in the international context than religion, and others such as Ukraine where religious variables loom larger. You can create a story around each of these positions, but I'll leave it to readers. How does the importance of shared religious beliefs relate to the importance of religion personally? Let's plot that: 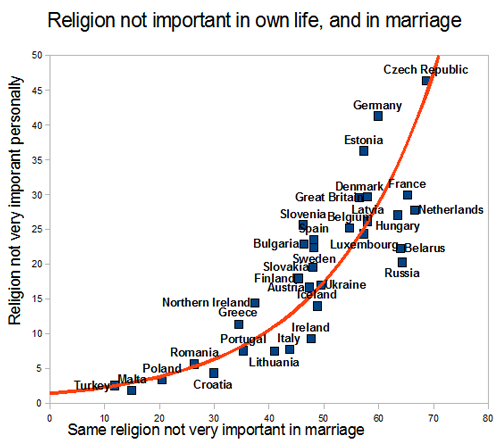 These results fit expectations; nation where religion is not important are also those where there is low emphasis on shared religious beliefs. Though in the Czech Republic so few people have strong religious beliefs that the alternative is less interreligious relationships than simply relationships between individuals who are religious and irreligious from the same cultural background. Now how does attitude toward ethnic intermarriage relate to religiosity? 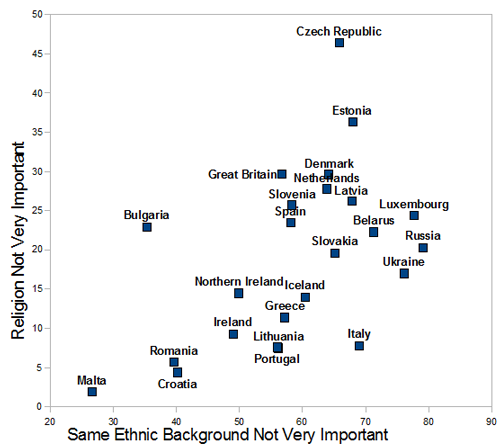 There's some relationship, but it is much weaker. This again fits our expectations, as strong correlations between X and Y and Y and Z does not entail a strong correlation between X and Z. In terms of contradicting expectations, the former Soviet Union seems a lot less racist than I had expected when it comes to this variable. That could be due to the way the question was worded, or sample representativeness issues, but it's still something to consider when colored people who live in the West get exposed to lurid media reports of extreme bigotry in Russia.