Peering into Erupting Volcanoes Is a Real Challenge 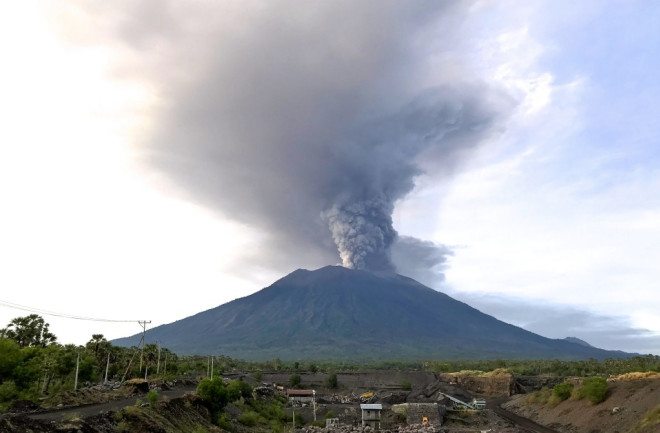 The eruption of Agung on November 27, 2017. Michael W. Ishak / Wikimedia Commons. Monitoring volcanoes is really hard. Not only are you trying to deduce what a volcano is going to do using context clues like earthquakes, gas emissions and deformation, but once an eruption starts, trying to get a peak at what is coming out at the vent is downright dangerous. New technology like drones and satellites have allowed us to more clearly see what is happening where we couldn't before, and these new data can help volcanologists better understand what a volcano might be doing next. First, we'll start with the volcano where we can actually see what is coming out the top (beyond ash and volcanic gases). Check out this shot of the lava dome growing in the crater at Agung in Indonesia, taken by a drone flown over the restless volcano:

What's the first thing you notice? Yup, it is that big, grey pancake in the shot. That is a new lava dome that has extruded since Agung started erupting a few weeks ago. From the look of it, the lava is relatively viscous as the dome has some thickness to it, especially in the middle. The lava is filling the summit crater and, if the eruption continues, could overtop the crater rim and potentially cause either lava flows or, more likely, pyroclastic flows as the lava dome collapses in big chunks and roars down the mountain. If you want to see some every closer images of the dome, check out these taken by someone

who foolishly climbed the volcano to see what was in the crater. Planet Labs

(below) also got some shorts of the growing dome taken on December 8, showing the steaming vent in the middle of the dome.

This behavior is standard for volcanoes like Agung, where the viscous lava (maybe andesite) oozes out in the erupting crater. You can see images that are similar from Cleveland in Alaska (as seen in August 2015). Cleveland

currently sits at Orange Alert status because of continuing explosions from the growth and destruction of the summit lava dome, much like Agung.

Lava dome at Cleveland in Alaska, seen in August 2015. John Lyons and Joe Schmitt, USGS/AVO Now, the situation in Iceland is more challenging. The whole summit area of Öræfajökull

is covered in a thick sheet of ice, so any lava domes or flows will be totally hidden from view. However, all that heat can melt the bottom of a thick cover of ice, causing the ice to sag to form a cauldron (not to be confused with a caldera). This ice cauldron might be located above an eruption going on under the ice or it might be meaning melting from increasing volcanic gas emissions and warming rock near the "surface" of the volcano. The Volcanology and Natural Disasters Group of the University of Iceland posted

two Landsat images of Öræfajökull taken on November 11 and December 10, 2017. The ice cauldron ("ketill") can be clearly seen in both images, but is definitely larger in the second image. The cauldron is surrounded by fractures in the ice ("sprunger") that are formed from the sagging of the ice. So, somewhere beneath the ice might be a new lava dome forming (depending on if this eruption is basalt or rhyolite). There is a whole range of volcanic features that form under glaciers

, so that might be what is being created right now.

Landsat 8 images of Öræfajökull on November 17 and December 10, 2017 showing the growing ice cauldron. USGS/NASA, courtesy of the Volcanology and Natural Disasters Group of the University of Iceland. Now, without any direct observation, knowing if this is being caused by eruption or merely heating/gases

from Iceland suggested that Katla

, another big Icelandic volcano that worries a lot of people, might have actually had a small eruption in 2011 that produced a glacial outburst flood (jökulhlaup). Einar Kjartansson of the Icelandic Meteorological Office says the volume of melt water and the seismic tremor that occurred during the floods of the summer of 2011 suggest that an eruption was the cause ... and it only took 6 years to positively identify it as an eruption! So, keeping an eye on erupting (or potentially erupting) volcanoes can be very challenging. Sometimes it is the great peril of getting near the crater of the volcano, sometimes all the action is obscured by meters and meters of ice and snow. However, volcanologists need this data to help understand what might be happening at these potentially hazardous volcanoes.