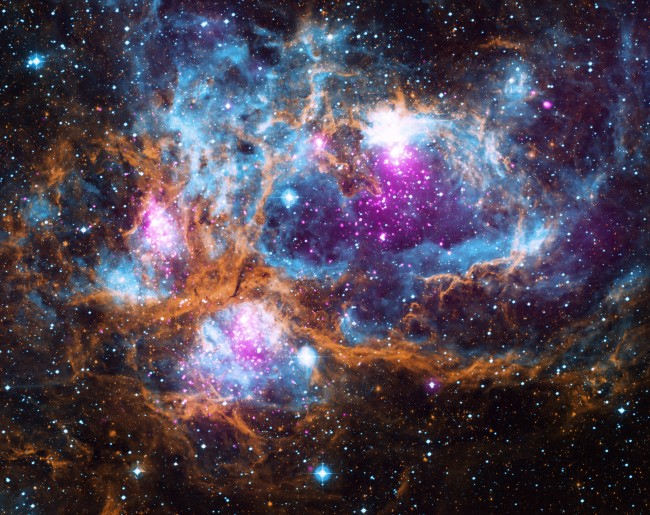 A group of three star clusters comprising the War and Peace Nebula is seen in this composite image released by NASA to commemorate Christmas and the holiday season. It was made using data from three space telescopes: X-ray data from NASA’s Chandra X-ray Observatory and the ROSAT telescope (purple); and infrared data from NASA’s Spitzer Space Telescope (orange). Plus optical data from the SuperCosmos Sky Survey (blue) made by the United Kingdom Infrared Telescope in Hawaii. (Source: NASA) There are more than 6,900 distinct languages, and thus at least that many ways for us humans to express freedom from war, violence, and disturbance, and the presence of quiet, tranquility and serenity. The headline expresses these ideas in ten different languages: English, of course, plus Hebrew, Latin, Arabic, French, Hindi, Spanish, Navajo, Russian, Chinese, Malay, and Xhosa. Will the fast-approaching New Year bring peace? Or more strife and violence? Will we see an outbreak of tranquility and serenity? Or, as Pope Francis put it in his annual Christmas address, yet more horrors for children in war-torn regions, "hiding underground to escape bombardment, on the pavements of a large city, at the bottom of a boat overladen with immigrants"? Call me naive, but images like the one of the War and Peace Nebula above give me faith that the better angels of our nature can overcome. It is a composite, created by NASA using data from three telescopes in space, and one atop Hawaii's Mauna Kea volcano.  The image shows amazing details of a group of at least three star clusters 5,500 light years from Earth that are scientifically designated as NGC 6357. Scientists on the Midcourse Space Experiment gave it a more evocative name: the "War and Peace Nebula." This was not in reference to Tolstoy's novel, but instead inspired by features within it that reminded them of a dove and a skull. Within this gargantuan glowing cloud of dust, hydrogen, helium and other gases, hot young stars blaze with an intensity that that far outstrips that of our own Sun. Intense ultraviolet radiation from these so-called O stars slams into hydrogen atoms, knocking electrons from their orbitals and thereby ionizing the gas. When these free electrons lose energy and return to their former orbits, they emit the light we see as the lovely glowing nebulosity. Regions of ionized gas like this are known as HII regions. What about the other features seen in the composite image of NGC 6357, most especially the bubble-like voids? I wrote about these common features of star-forming regions in a book a number of years ago, titled "Origins: the Quest for Our Cosmic Roots." Here's an excerpt:

In the process of ionizing the gases, the UV radiation heats them as well. The result is a bubble of ionized gas inflating within the nebula. In the bubble's interior, dust is swept clean, causing a region around the stars to be evacuated of obscuring material. Meanwhile, the expanding bubble wall causes compression of gas and dust within the surrounding molecular cloud, triggering gravitational collapse of knots of material and thereby giving birth to new stars.

The massive O stars also produce stellar hurricanes — fierce winds of atomic particles that blow outward and help to inflate the giant bubbles like those seen in the image of NGC 6357. Pillars, knots and columns can be seen surrounding the bubbles, and projecting into them. Consisting of interstellar dust and molecular gas, these features have been sculpted by the radiation and particle winds emanating from the O stars. Massive protostars often hide within these features. Why does an image like that of NGC 6357 give me hope that peace can prevail over war, and serenity over strife, even as events seem to be rushing headlong in the opposite direction? Well, just look at it — and ponder what it took to produce it. Humans sitting on a tiny little mote of a planet in a hostile void worked collaboratively over many years to create incredible instruments capable of gathering photons of light emitted from a nebula 5,500 years ago. And in so doing, they have contributed to understanding of our cosmic origins. What an achievement. As astronomer Sandra Faber, Professor Emerita at the University of California Observatories, told me when I was writing "Origins":

. . . far from feeling dwarfed by the vast reaches and energy of the cosmos, what we really learn is that we are the most remarkable and complicated product of cosmic evolution, and our potential is unlimited.

Let's hope we don't screw it up.