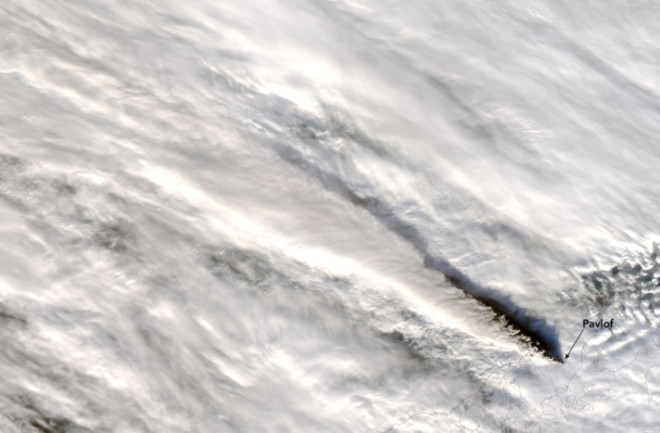 Jeff Schmaltz / NASA Earth Observatory. The eruption at Alaska's Pavlof that started a few days ago intensified on Saturday. Although the area is blanketed with a low cloud deck, an ash plume was clearly seen in satellite images of the area (see above) -- meaning that the eruption was now throwing ash over 9 km (30,000 feet) above sea level. The Aleutian Islands region is criss-crossed with corridors for aircraft flying back and forth from Asia to North America (and beyond), so such an impressive ash plume, combined with less then stellar visibility, means that airplanes have been instructed to avoid the area around Pavlof. Remember, large jet aircraft and ash don't mix! The Alaska Volcano Observatory is reporting that seismic tremor at Pavlof is still high, meaning magma is still moving into the volcano and the eruption is going strong (without ground-based visual confirmation.) Luckily for people on the ground, the ash is being blown out to sea rather than towards populated areas like Cold Bay.

The thinner, wispier ash plume from Pavlof seen on November 14, 2014 by Aqua MODIS.

NASA. UPDATE 3PM EST: According to the latest AVO update, seismic tremor has dropped at Pavlof, suggesting the eruption has waned and as of this morning (Alaska time), there seems to be little evidence of a plume.