By analyzing tree rings from a shipwreck, we know the tale of the Dolphin from Rhode Island — a whaling ship built in 1850 and lost less than a decade later. 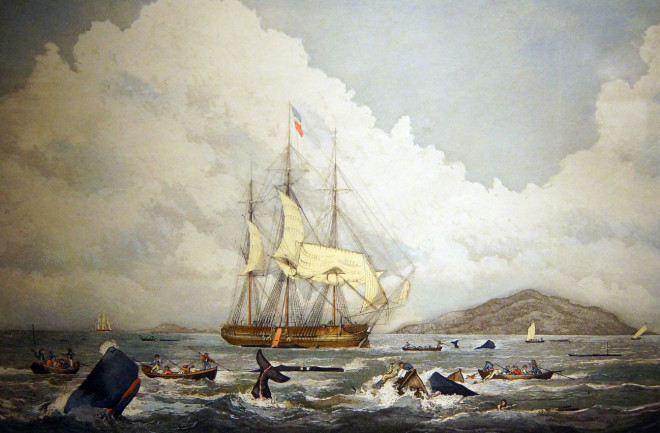 When a shipwreck began to emerge from the sands along the coast of Patagonia in the early 2000s, archaeologists answered the call. Now, after analyzing the tree rings found in its wood, an international team of researchers are “almost certain” that the vessel is the Dolphin — a whaling ship that set sail from New England more than 150 years ago and sank 10,000 miles from home.

They published their findings in the journal Dendrochronologia earlier this year. The study marks the first time that tree rings have been used to successfully identify a shipwreck in South America.

Going Down in History

The Dolphin first sailed from Warren, Rhode Island, in 1850. Before it was lost in 1859, the ship — described as “probably the fastest square-rigger of all time” — traveled across the globe on separate voyages in search of whales. Historical records stated that it went down in Patagonia’s Golfo Nuevo.

Even early on, archaeologists assigned to the site figured the scattered remains may belong to the Dolphin. “We knew that the Dolphin was shipwrecked in the area, as there are historical testimonies that state the sailors were rescued by an Argentine captain, [Luis Piedrabuena],” says Cristian Murray, of the National Institute of Anthropology and Latin American Thought in Argentina.

“We arrived at the conclusion that the shipwreck dated from the 19th century, due to features of its construction and other evidence,” he continues. Specifically, cauldrons (likely used by whalers to render oil from whale blubber) were found among the wreckage, strengthening the conclusion that it was linked to whaling.

The researchers had also hypothesized in an earlier study that the ship, built mainly from oak and pine, was from the Northern Hemisphere. But this remained merely a hypothesis; more information was needed to pinpoint its origins and determine whether or not the ship was indeed the Dolphin.

All Signs Point to Yes

Enter Ignacio Mundo, a dendrochronologist with Argentina’s Laboratory of Dendrochronology and Environmental History. “The first thing was to convince the archaeologists that we need to have cross sections,” says Mundo, first author of the latest Dendrochronologia study. This was no small feat: Those sections of timber — necessary to accurately date the wood – nevertheless involved damaging archaeological evidence.

Once researchers had cut and analyzed these sections, they consulted a vast database run by scientists at the Columbia Climate School to determine that the wood originated in New England and the Southeastern U.S. Further analysis revealed the trees were cut down in or before 1849, one year before the Dolphin set sail.

The whaler was probably built and put to sea only roughly less than nine months after the trees were felled — a short amount of time in that period. This suggests “that her owners or agents were in a great hurry to send her to the whaling voyages,” write the study’s authors.

“It's very likely that this is the Dolphin, but we cannot be 100 percent sure,” says Monica Grosso, who studied the shipwreck alongside Murray. “There are some other shipwrecks in the area. There were also other American whalers sailing the coast of Patagonia at that time and many of those were built in the New England area.”

From around 1770 to the 1860s, New England was a hub for whalers, who set out to capture cetaceans and their blubber. This was then boiled down and turned into oil. Eventually, however, demand for oil and whalebones led to the decline of whale populations — and with it, the whaling industry.

The Dolphin is the first Patagonian shipwreck to be studied archaeologically, Grosso adds. “These kinds of studies are important in order to analyze whaler activities in Patagonia. It opens the door to better understand an activity that had a massive global impact, but at the same time is little known or studied at the local level in areas such as this.”

“We don’t know whether the ships were coming close to the shore to hunt whales, to take on provisions like water, or exchange with indigenous inhabitants along the coast. There are different possibilities,” Murray says. Yet all the researchers agree that further discoveries remain to be made along the harsh and remote Patagonian coast.