Pair of Trojan Asteroids Hint At Battle Between Giant Planets 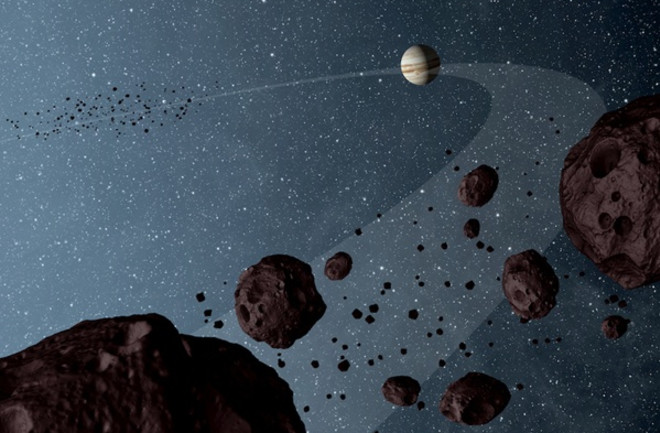 Jupiter's Trojan asteroids are shown in this artist's concept as they orbit in harmony with the gas giant — one group ahead of Jupiter, and one group behind. (Credit: NASA/JPL-Caltech)

Much like the famed Trojan horse, Jupiter’s Trojan asteroids are hiding a secret.

According to a new study published in the journal Nature Astronomy, the existence of a bound pair of “Trojan asteroids” trapped in a stable orbit around Jupiter suggests the early solar system was shaken up by a battle between the giant planets much earlier than astronomers previously thought.

“The Trojans were likely captured during a dramatic period of dynamic instability when a skirmish between the solar system’s giant planets — Jupiter, Saturn, Uranus, and Neptune — occurred,” said lead author David Nesvorny of the Southwest Research Institute (SwRI) in a press release.

According to the study, within just 100 million years of the solar system’s formation, the giant planets had already jostled for position. During the fray, Jupiter jumped inward a hair, while Uranus and Neptune were pushed away from the Sun toward an ancient collection of small bodies located on the outskirts of the solar system. These small bodies are known as Kuiper Belt objects, and can include comets, asteroids, and everything between.

With the new addition of Uranus and Neptune, the still-forming outer solar system got thrown out of whack. “Many small bodies of this primordial Kuiper Belt were scattered inwards,” said Nesvorny. “And a few of those became trapped as Trojan asteroids.”

The leading camp of Trojan asteroids, known as the “Greek Camp,” is located at Jupiter’s L4 Lagrangian point (think “L4 for forward”), which is a special point in a planet’s orbit where competing gravitational forces from the Sun and the planet perfectly balance each other. Among the trailing population of Trojans — located at L5 and referred to as the “Trojan Camp” — hides a strange, co-orbiting pair of twin Trojans named Patroclus and Menoetius. The pebble-pile asteroids that make up this binary couple are each about 80 miles (130 kilometers) wide and are remnants from the very earliest moments of the solar system’s formation.

“Observations of today’s Kuiper Belt show that binaries like these were quite common in ancient times,” said co-author William Bottke of SwRI’s Space Studies Department. “Only a few of them now exist within the orbit of Neptune. The question is how to interpret the survivors.”

Many existing models that attempt to explain how the solar system evolved suggest that planetary migration took place roughly 700 million years after the Sun formed. This is partly because the migration of the planets is often linked to a period known as Late Heavy Bombardment (LHB) — a cataclysmic era beginning about 3.9 billion years ago. During LHB, huge numbers of asteroids tirelessly shelled the inner planets and the Moon, leaving behind many craters that we can still see today.

However, although LHB is often associated with planetary migration, the authors of the new study argue that the two events occurred during distinct epochs separated by over half a billion years.

According to the study, if the planets didn’t migrate until 700 million years after the formation of the Sun, then there is very little chance the fragile Patroclus-Menoetius Trojan could have survived. Instead, the researchers claim (and support with new models and simulations) that Patroclus and Menoetius were already bound together and in place around Jupiter long before LHB occurred. Since the binary pair was most likely captured by Jupiter during its tussle with the other giants, the researchers argue the very existence of the Trojan pair strongly suggests the planets migrated very early on, within about 100 million years of the solar system’s formation.

If shown to be true, this new model has dramatic implications for LHB.

Many large craters observed on the Moon, Mercury, and Mars are typically associated with impacts from outer-solar-system asteroids during LHB. But if the planets migrated hundreds of millions of years before LHB occurred, then where did impacting asteroids come from? One possibility is that the crater-causing impactors that struck the inner planets did not originate from the outer solar system. Instead, they could have come from the rocky leftovers of the newly formed terrestrial planets.

Although there are still many mysteries regarding the Trojan asteroids that remain to be solved, an ambitious NASA mission will help lift the veil. Scheduled for launch in 2021, NASA’s Lucy mission will soon embark on a meandering 12-year journey that will take it to six Trojan asteroids, as well as one main-belt asteroid for good measure. Fittingly, Lucy’s last scheduled target, which it should reach in March of 2033, is none other than the binary pair of Patroclus and Menoetius.

So keep an eye out, because over the next 15 years, we are primed to learn a great deal about the hidden troops that make up Jupiter’s Trojans. And they likely have some more secrets to share.