Outer Space Is a Treasure Chest of Gemstones

Scientists suspect it might be raining diamonds on Neptune and Uranus. Evidence of opal on Mars hints at a watery past. Outside our solar system, there may be rubies and sapphires too. But the gems that form within Earth still might be the most dazzling. 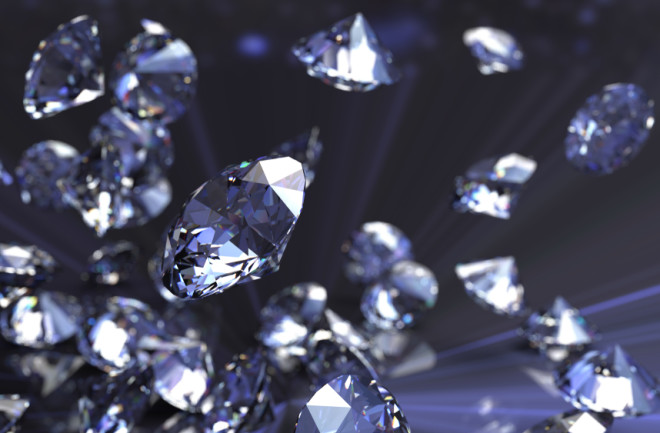 In 2012, scientists announced they’d found a planet, 55 Cancri e, that was made out of diamond. The idea was based on estimates of the planet’s size and density.

Soon after their work was published, however, other research suggested they’d been wrong.

Roger Clark, a senior scientist at the Planetary Science Institute in Tucson, explains that to come to these kinds of conclusions, scientists work backward, starting with the size and mass of a planet. They use that information to estimate density, and then work to determine what kind of materials could produce that density. But, he says, “it’s not proof that those materials are there.”

While the entire planet of 55 Cancri e may not be made of diamond, there is good reason to believe that diamonds do exist outside of Earth, throughout the universe, along with other precious stones like opal, rubies, and sapphires.

“We can form all sorts of gemstones potentially in space, as long as you have the right chemistry in the right temperature and conditions,” says Wendy Mao, a professor of geological sciences at Stanford University.

“Diamonds are just pure carbon,” says Mao. And carbon is abundant in the universe. However, diamonds don’t just spontaneously form anywhere there’s carbon; a particular set of circumstances must exist. Along with extremely high temperatures and pressures, diamonds form in environments that lack oxygen.

Diamonds shouldn’t even really exist on the Earth’s surface. “It’s not stable,” explains Mao, adding that a pure diamond would not survive a house fire because the heat would help it react with oxygen in the atmosphere. “If it’s able to react with oxygen, it would turn to carbon dioxide or graphite and destroy the diamond.”

In 1987, scientists found nanodiamonds — tiny microscopic pieces of diamonds — in meteorites. Inside those nanodiamonds, researchers have since found trapped gasses and minerals that give clues about when and where they formed. For example, ureilite meteorites — a type of meteorite with a high percentage of carbon, named for Novy Urey, a village hit by a meteor in 1886 — contain diamonds. In those diamonds, researchers found materials that suggested that the gems were created inside a planetary body as old as the solar system. However, some scientists still dispute this, and suggest these diamonds could be the results of powerful collisions between smaller objects.

Researchers also suspect that it could be “raining diamonds” on Neptune and Uranus. The scientists conducted experiments here on Earth mimicking the temperatures and pressures on these planets and found that they are intense enough to form diamonds. Then, because the diamonds are heavier than the environments surrounding them, they’d sink into the planet — a little like rain. The sinking diamonds generate friction, which the researchers say may help explain why these icy planets generate more heat than we would expect.

For opal to form, there has to be water and heating events such as volcanic eruptions or major impacts — both of which Clark’s team knew existed on Mars. Among the astronomical community, there’s a joke about “NASA's monthly announcement of the discovery of water on Mars,” he says. “Every infrared spectrum that's ever been taken of Mars from all the spacecraft that have gone — every single location shows water. So there's water at some level all over Mars.”

An infrared spectrum is a measurement of how much infrared light a particular material absorbs. The spectrum, a horizontal line with a series of spikes similar to a heart rate measurement, allows scientists to identify different compounds, like minerals.

But researchers can’t just measure the spectrum of an entire planet. They can only use the technology to look at one very small region at a time. “We only have postage-stamp views of small locations to get the really fine details,” says Clark. And in 2008, in one of those small views, his team found opaline silica, the building block of opal. Because much of the planet is covered in dust storms, he says, “it's hard to find locations where other things are exposed, where you can start to really understand the planet's history. So finding locations where we can see other minerals is always exciting,” even if it was expected.

Researchers have even predicted that distant planets in other solar systems could be filled with gems like ruby and sapphire based on their size and proximity to the star at the center of their systems. Scientists have found evidence of cubic zirconia in moon rocks, showing that the universe not only holds diamonds, but its own fire-safe knock-offs. Space could be absolutely shimmering with precious stones, though Mao emphasizes that they probably aren’t quite like the ones in earthlings' jewelry boxes. “Some of the conditions to form really nice gem quality — large crystals that are clear or that have the color we want — they do require the interaction of water,” says Mao, in a way that “probably is unique to Earth’s liquid water as we know it.”