Our Solar System's Formation Was A Lot Messier Than You Think 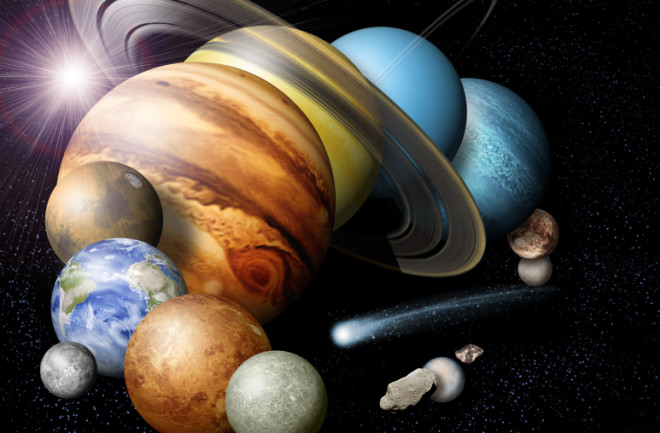 The early solar system was a violent place: it wasn't just asteroids, but whole planets that veered on strange courses. (Photo credit: NASA)

When most of us learn about the solar system, it seems like a pretty well-ordered place. Our sun formed first, about five billion years ago, and the planets appeared a little later. As a very general trend, these planets grew larger and less dense the farther from the sun they formed.

But this story leaves out the chaotic dynamics and frenetic reshuffling that occurred when our solar system was young. Nature may like order eventually, but that order evolves out of pure chance. Our solar system may be settled down now, but in its youth, it was a wild place.

Creating Order Out of Chaos

The planets formed out of an initial disk of gas and dust. (Credit: NASA)

The planets formed out of an initial disk of gas and dust. (Credit: NASA)

The basic story does sound ordered. Any star system begins as a vast disk of gas with a baby star forming in the center. The star absorbs the vast majority of the material in this disk, but there’s some left over. Those remnants coalesces into dust grains, which become pebbles, which become boulders and eventually planets. Meanwhile, the young star is turning on and starting to shine, creating a solar wind that starts to blow out the leftover gas. Only heavy materials are left near the star, leading to small, dense planets close by. Physics also tells us these closer planets have smaller orbits, limiting the amount of material they can encounter and nab with their growing gravitational bulk. Farther out, gas giants can form, sucking in large amounts of hydrogen and helium gas. And beyond that, you find the snow line, where ices can exist without being melted or baked away by the sun’s heat. These get incorporated into the ice giants.

That sounds very tidy and quaint, a cosmic “just-so story”, if you will. But the solar system is more messy and more complex than that. There’s the Kuiper Belt and Oort Cloud for example, swaths of detritus that aren’t collected into any one object. Mars is suspiciously tiny, and why is there an asteroid belt in the middle of the solar system anyway?

We also know that Earth was struck by some monstrous object in its early history, though where it came from is still a mystery. In any case, that planet-sized impactor gave us a moon — which turns out to be helpful in all kinds of ways. But it certainly wasn’t destined to be that way.

Planets Don’t Stay in One Place

Jupiter still has a lot of sway in the solar system, with entire families of asteroids called Greeks and Trojans under its gravitational influence. (Credit: Roen Kelly)

Jupiter still has a lot of sway in the solar system, with entire families of asteroids called Greeks and Trojans under its gravitational influence. (Credit: Roen Kelly)

Remember that Nature starts most chains of events pretty randomly. So sometimes planets will form on orbits that aren’t stable over the countless millennia of the planets’ lifetimes. Occasionally that instability means planets crash into each other. More often, it means they veer cosmically close — not colliding, but close enough for gravity and momentum to send them careening off on strange orbits. We use this “slingshot effect” all the time with spacecraft to great benefit, but random encounters result in random slingshotting. Sometimes planets may fling themselves out of the solar system entirely — like the Mars-sized object that collided with Earth to form our moon, and now is nowhere to be found. Scientists have found a few of these rogue planets, unattached to any identifiable star, drifting in the cosmos.

And our moon’s birth isn’t the only example of planets roving. Back when the solar system was young, our sun hadn’t yet blown away all the extra gas. Instead, it remained scattered throughout the planets, denser in some areas than others. Jupiter, cruising around the sun, interacted with these waves of gas and began to lose angular momentum and spiral in. As it migrated in toward the sun, it also nudged in closer to its inner neighbor, Mars, and sucked in material that by rights should have belonged to the Red Planet. This could explain why Mars somehow ended up with less material than Earth, despite having a bigger orbital path that therefore should have fed it richly enough to grow much larger. To get back where we see it in the modern era, Jupiter would then have had to reverse course, in a move researchers call a “grand tack” (as in a sailboat tacking to change direction). But why should a planet suddenly change directions?

Jupiter and Saturn still have a lot of sway in today’s solar system, thanks to their large bulks. Researchers think it’s possible that eons ago, as Jupiter spiraled in toward the sun, Saturn came chasing after. The two became locked in a resonance that spiraled them back out and cast an even stronger pull on the objects around them. Such a gravitational shove might have pushed Neptune farther out, which in turn scattered icy Kuiper Belt objects inwards. Jupiter then flung these objects all over, forming the Oort Cloud that still surrounds us.

WASP-12b is another planet so hot it's losing its atmosphere to its star. (Credit: ESA/Hubble)

WASP-12b is another planet so hot it’s losing its atmosphere to its star. (Credit: ESA/Hubble)

It might help to look at these events from a more distant perspective. Since astronomers discovered the first planets outside our solar system a few decades ago, it’s been clear that other solar systems don’t look much like ours. Some of that is observational bias — it’s actually quite difficult to see planets as small as Earth orbiting as far from their star as we do from the sun.

But even the larger planets we do see look different. Astronomers have found numerous hot Jupiters, gas giants traveling on sizzling orbits close to their stars. They’ve discovered scores of super-Earths, sub-Neptune sized objects that appear to be the most common type of planet — and one that doesn’t exist in our home system. And with more systems to look at, they’ve noticed what there was evidence for in our own system the whole time: that planets often go roving.

Hot Jupiters have been confusing since astronomers first found them. It doesn’t make physical sense for a giant ball of gas to form next to a brilliantly hot star. The star will strip away that gas faster than the nascent planet’s gravity can pull it close. In fact, we can see this happening around some of the hottest exoplanets, like HD209458b. Astronomers can actually observe its atmosphere streaming away behind it, being boiled off.

Perhaps even more telling is WASP-17b, another hot Jupiter. This one orbits retrograde (backwards) to its host star, a sure sign that something wonky happened in its past, as planets can’t start out rotating the wrong way.

Astronomers also know that both of these planets are loners, like other hot Jupiters. This might have been our solar system’s fate, if Saturn hadn’t pulled Jupiter out of its downward spiral. Without that rescue mission, Jupiter might have herded the rest of the solar system into deep space. We don’t know if systems with hot Jupiters had more planets in their pasts, but we do know it would be unlikely for those hypothetical planets to survive a Jupiter-like planet’s sunward plunge.