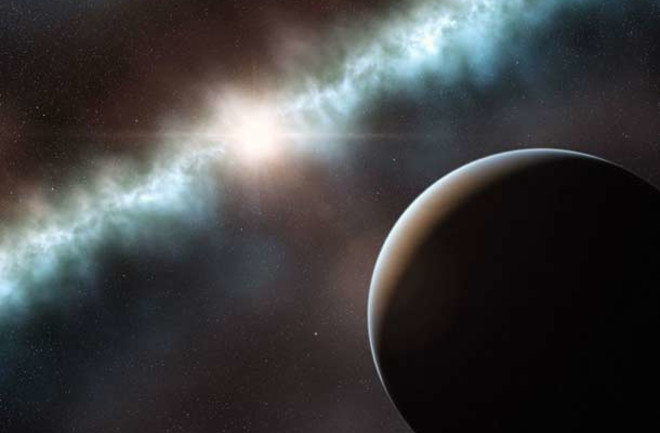 Young. Old. Scalding hot. Icy cold. Terrestrial midgets. Gas giants. As the cavalcade of planets spotted beyond our solar system continues to grow, we get to see worlds of all sorts—and we get to speculate on the staggering number of exoplanets that might inhabit just our own galaxy. Today's first piece of otherworldly news involves baby exoplanets. Astronomer Christian Thalmann says his team may have spotted planets in the process of forming around three different stars, the first time scientists have spotted the process in action.

An infant star forms from a collapsing cloud of dust and gas and gathers a dense, flat disk of material that rotates with the star like a record album. The material in the disk will eventually clump up into nascent planets. Theoretical models of planet formation predicted that those protoplanets should suck up more gas and dust with their gravity, clearing a wide gap in the otherwise solid disk. [Wired]

Peering at young stars like T Chamaeleontis (T Cha) LkCa15 and AB Auriga, Thalmann and colleagues saw those telltale gaps in the dusty rings (their study is forthcoming in the Astrophysical Journal Letters

, so these pictures of infant solar systems could resemble what our own looked like as a baby. But though the stars are nearby in cosmic terms—T Cha lies just 350 light years away—the gaps are faint enough that it's difficult to tell for certain if newly forming planets, and not the influence of binary stars or other objects, are creating them. If Thalmann's team is right, catching the birth of new worlds would be a great scientific coup. Our galaxy, however, isn't exactly hurting for planets. Earlier this month came the big announcement from NASA's Kepler mission

, including 54 found in the habitable region around their stars. Since then, project science head William Borucki has done a few back-of-the-envelope extrapolations based on Kepler's findings, and produced some eye-popping planet tallies that he announced at last weekend's American Association for the Advancement of Science (AAAS) annual conference in Washington: The total number of Milky Way planets could be on the order of 50 billion, with 500 million of those falling in the life-friendly Goldilocks zone

Borucki and colleagues figured one of two stars has planets and one of 200 stars has planets in the habitable zone... And that's a minimum because these stars can have more than one planet and Kepler has yet to get a long enough glimpse to see planets that are further out from the star, like Earth, Borucki said. For example, if Kepler were 1,000 light years from Earth and looking at our sun and noticed Venus passing by, there's only a one-in-eight chance that Earth would also be seen, astronomers said. [AP]

—humankind's best planet-hunter—surveys an area that accounts for just one-four-hundredth of the sky. And yet it produces a bonanza of worlds, the implications of which got extraterrestrial life enthusiasts buzzing at the same AAAS meeting. Howard Smith of the Harvard-Smithsonian Center for Astrophysics argued that the great distances and relative harshness of the universe makes humanity a de facto loner. Even if there are other civilizations, he said, we could never reach them in person or by electronic communication (at least, not without a hundred generations of humans awaiting the response). But Seth Shostak of the SETI Institute

unsurprisingly saw the sunny side of a galaxy overflowing with planets.

Shostak cited an argument that says increases in computer power mean we'll be able to analyse far more planetary data than has been possible until now. He was confident that within 24 years we would detect an alien civilisation. "There are maybe 10 ^21 Earth-like planets out there," he said. "Believing there aren't ETs is believing in miracles." He bet the audience that we'd find ET within our lifetime or else he'd buy us a cup of Starbucks. [New Scientist]

I rarely turn down a strong cup of joe, but I hope Shostak is proved correct. Related Content: DISCOVER: How Long Until We Find a Second Earth?

Bad Astronomy: How many habitable planets are there in the galaxy?

80beats: The Estimated Number of Stars in the Universe Just Tripled

80beats: Super-Hot Super-Earth May Have an Atmosphere of Steam