Osiris: The Scorched Exoplanet With a Comet-Like Tail 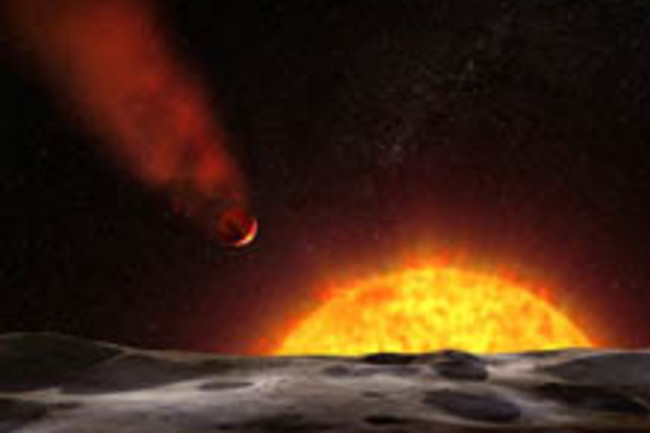 We know about exoplanet HD 209458b, nicknamed "Osiris." We know it's 153 light years away, that it has water in its atmosphere, and that it orbits its star in three and a half days at a distance 100 times closer than Jupiter is to the sun. But we didn't know this for sure until now: This planet has a tail.

In a study in The Astrophysical Journal, a research team says Osiris, a gas giant, orbits so close that its star is blasting away its atmosphere. As the planet progresses on its blazing hot and hasty revolutions, a tail like that of a comet follows behind it. The Hubble Space Telescope's Cosmic Origins Spectrograph caught the effect as Osiris made repeated transits in front of its star.

The instrument detected the heavy elements carbon and silicon in the planet’s super-hot 2,000 degrees F (1,100 C or so) atmosphere. This detection revealed the parent star is heating the entire atmosphere, dredging up the heavier elements and allowing them to escape the planet.

Jeffrey Linsky, of the University of Colorado, who led the study, said: “We have measured gas coming off the planet at specific speeds, some coming toward Earth. The most likely interpretation is that we have measured the velocity of material in a tail” [Christian Science Monitor].

The planet may be losing material to that tail at a rate of 10,000 tons per second. But fear not for brave Osiris. Even at that rate, hot Jupiters don't disappear overnight.

"It will take about a trillion years for the planet to evaporate," Linsky said [Space.com].

catch our attention all the time, especially with the Kepler mission

now out in space and on the hunt. But Osiris is one of the best-studied alien worlds. Scientists first spotted it in 1999. Since then, studies have shown it holds not only water vapor

in its atmosphere, but also compounds connected to life

, like methane and carbon dioxide (though Osiris is probably a little toasty for life as we know it). And just last month, astronomers found fierce storms raging

on Osiris with wind speeds in excess of 3,000 miles per hour—making the strongest winds known in our own solar system look meek by comparison. If you like these artist's impressions of this exoplanet, check out an astronomer's thoughts

on such creative renderings.

80beats: First Ever Weather Report From an Exoplanet: Highs of 2240 Degrees