OSIRIS-REx Is Headed for an Asteroid Encounter, Following 'Perfect' Launch 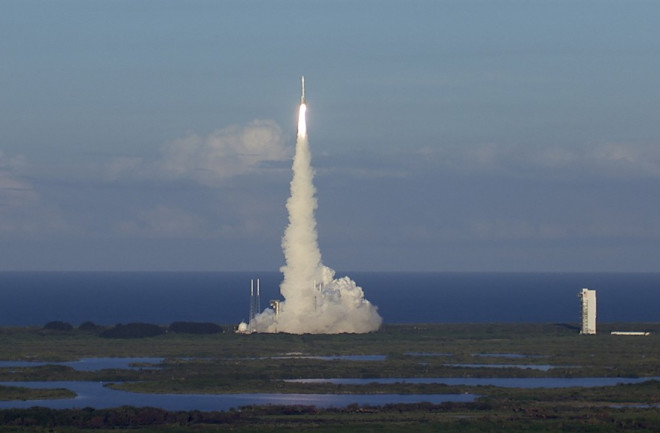 Liftoff! (Credit: NASA) Smoke and fire covered the ground as the NASA’s OSIRIS-REx mission launched into space. Blasting out of Earth’s orbit on Thursday, the mission begins its two-year journey to sample an asteroid. It will be seven long years before the spacecraft returns home, dropping its bounty into the Utah desert. Along the way, it will map an asteroid in depth and help scientists better understand the secrets of the early universe. Mission team members anticipated good conditions headed into the launch. Favorable conditions heralded the day, with light thunderstorms sweeping quickly through around noon. By evening, the sky overhead was clear of clouds, though a few gathered over the ocean to the east. OSIRIS-REx launched aboard at Atlas V rocket, exploding into the sky promptly on schedule at 7:05 pm EST. This was the rocket’s 65th successful launch, and it was a triumph. At its head, OSIRIS-REx cut through the clear blue sky with deceptive ease. “We hit all of our milestones right on time—in most cases, a little ahead of time,” United Launch Alliance program manager Scott Messer told the press right after the launch. “The vehicle performance was absolutely perfect,” he said. An hour after the launch, long after it was out of sight, the rocket separated from the upper stage. According to Messer, the vehicle entered an almost-perfect orbit, making a handful of minor corrections to ensure it remained on course. Following its separation, the spacecraft was “immediately able to start receiving some telemetry back from the vehicle,” Rick Kuhns, the OSIRIS-REx program manager for Lockheed Martin, told the press. In the time between launch and the evening conference two hours later, the propulsion system was initialized, the solar arrays were deployed, and the spacecraft turned in multiple directions to ensure everything functioned properly. Within 40 minutes of separation, OSIRIS-REx communicated with the Canberra Deep Space Ground Communication in Australia. “The OSIRIS-REx spacecraft is happy and healthy,” Kuhns said. “Let’s go get the science!” OSIRIS-REx principle investigator Dante Lauretta called the launch “a wild, emotional ride.” The journey, however, has only begun. OSIRIS-REx will spend two years traveling through space to reach the asteroid Bennu, and another two years making extensive maps of its surface in search of the best site to retrieve a sample from. Once it has scooped up material from the asteroid’s outer layer, it will spend another two years traveling back home, hurling its sample to Earth when it arrives. “We’ve worked really hard to get to this point,” Lauretta said of the launch. He looks forward to the next stage, when the spacecraft will enter orbit around Bennu, retrieve a sample, and return home. “The best times are ahead of us.” This article originally appeared in