Only Three People Have Died in Space

Georgi Dobrovolski, Vladislav Volkov and Viktor Patsayev are the only people who have died in space. 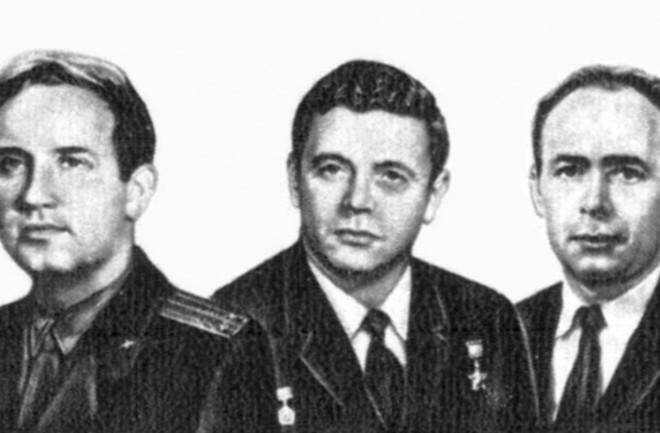 On April 19th, 1971, the Soviet Union launch history’s first ever space station, Salyut 1. Days later the Soyuz 10 mission failed after a problem with the docking hatch meant the crew couldn’t actually board the station. Unwilling to let Salyut languish, Soyuz 11 launched on June 6 and Georgi Dobrovolski, Vladislav Volkov, and Viktor Patsayev became the first men to live aboard an Earth orbiting station. Their mission wasn’t without its problems, but the problems were just beginning when the crew was brought home a week early. A valve opened early during the descent, and the crew, exposed to the vacuum of space, died from decompression.

For Soviet scientists in the early 1970s, space stations were seen as a main artery into space, research testbeds like the ISS is now as well as launch points for deep space missions. It had been was with this forward thinking that the Salyut program developed. On April 19, 1971, the Soviet Union launched history’s first space station, the Salyut space station. Three days later on Aril 22, Soyuz 10 launched with a crew of three on board with the intention of manning the station for 30 days. But the mission failed; the crew was able to dock with the station but a problem with the hatch meant they couldn’t actually board it.

To compensate for the lost mission, Soviet planners scheduled two more missions to the station to fly that year. Up next was Soyuz 11. The prime crew of Soyuz 11 was Soyuz 10’s backup crew, but it was not to be. Days before the planned launch, medical examiners found swelling in cosmonaut Valeriy Kubasov’s right lung. As per Soviet Ministry of Health rulings at the time, they didn’t swap out one man for his backup like happened on Apollo 13 with Jack Swigert replacing Charlie Duke at the 11th hour. Instead they swapped out the whole crew.

Georgiy Dobrovolskiy, Viktor Patsayev, and Vladislav Volkov were on deck. They launched under the callsign “Yantar” on June 6, 1971.

They successfully boarded the station, and began their science mission. They did cardiovascular experiments, tests of visual acuity, and measured radiation exposure. They also ran experiments on tadpoles, algae and even cared for small plants in a greenhouse built into the station! They also did some observations, mainly telescope observations of earth and other celestial bodies. In total, they ran more than 140 experiments in 24 days; their mission was cut short when tempers and moods started to decline after some stressful glitches, including a strange odor of smoke in the station. No one wanted to risk the crew, who was abandoning their exercise regimes and making increasingly sloppy decisions, so they were brought home six days early.

On June 29, the crew transferred from the Salyut into the Soyuz that would bring them back to Earth. They completed three more orbits before saying goodbye to ground crews, who responded that they would soon see them on Mother Earth.

At 1:35 a.m. the retrorockets fired for the seven minute reentry burn. Everything looked good. The parachutes deployed on time, the spacecraft made a soft landing, and recovery crews excitedly went to welcome the cosmonauts home. But mission control had failed to establish contact with the crew, and when the recovery team opened the hatch they found all three men still, blue in the face, and with blood trickling from their ear in their couches. They were still warm, warm enough that recovery crews tried to resuscitate them with CPR, but the efforts were to no avail. The crew was dead.

Speculation on the cause was immediate. Some thought they had succumbed to weightlessness — there was still debate at the time whether a human could be in zero gravity for a prolonged period of time, that the heart slowly but surely failed in space. Others suspected the cause was decompression. The cosmonauts weren’t in pressure suits, perfectly normal and standard for reentry, and they were strapped into their couches. It looked like nothing was wrong until something went wrong and fast: decompression. Other theories included a toxic leak in the spacecraft.

While Soviet investigators looked into the three mens death there were a lot of questions about the continuation of manned spaceflight.

The Soviet Special State Commission investigating the accident released a statement on July 12 confirming that decompression was the culprit. 30 minutes before landing, the report said, a rapid drop in pressure exposed the cosmonauts to a vacuum, killing them almost instantly.

The fault turned out to be in an element of the descent vehicle.

The orbital and instrument modules separated about 80 miles above the ground, and the pressure in the descent module fell rapid; it took just under two minutes for there to be no atmosphere left in the cabin. The culprit was either premature opening of one of two valves at the top of the spacecraft, both of which are controlled by the same circuit, or a leak in the hatch, but the first was the likelier scenario.

The bodies’ position suggested that Dobrovolski and Patsayev had tried to unstrap themselves to shut the valve but couldn’t act fast enough. Biomedical data supported this with all three cosmonauts heart rates spiking moments after separation when they first became away of the leak. In less than a minute all three showed dangerously low heart rates indicative of a lack of oxygen, and in a little over a minute they had no heartbeat at all.

The autopsy reports remain classified, but it wasn’t a nice way to die. All three men would have had pain in their heads, chests, and abdomens. Then their eardrums would have burst and blood would have trickled from their noses and mouths, which was how they were found in the spacecraft. And it would have taken as long as a minute for them to lose consciousness completely, though they wouldn’t be active; they would be immobilized but aware.

Like all accidents, the legacy of Soyuz 11 is that it made spaceflight safer. There were mission rule changes in the wake of the cosmonauts deaths. The valves were revisited to be made more stable and with a fast-close system in case there was ever another leak, and cosmonauts were now ordered to wear Sokol spacesuits during reentry. The suit, supplied by the spacecraft’s or its own oxygen source, was a last defense against decompression.

Since the Soyuz 11 flight, no cosmonaut or astronaut has died from decompression in space.

*This post was updated with the full text of the article on September 5, 2017. Sources: NASA; NASA; Space.com;