O'Neill colonies are an idea nearly as old as the space program, but they still hold value for the future. 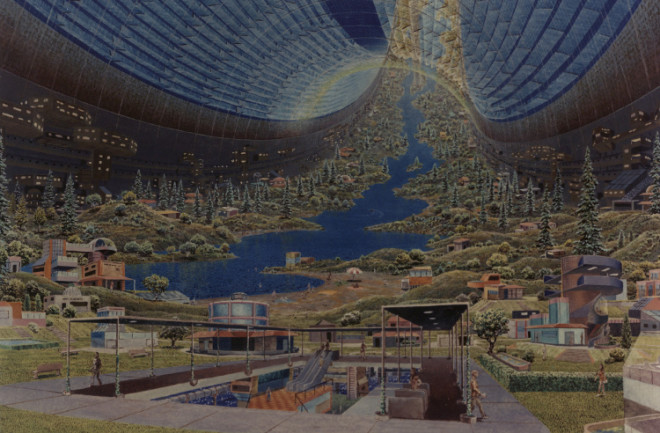 Last week, Amazon founder Jeff Bezos revealed his spaceship company's new lunar lander, dubbed Blue Moon, and he spelled out a bold and broad vision for humanity's future in space. Faced with the limits of resources here on Earth, most fundamentally energy, he pointed to life in space as a solution.

And while colonies on other planets would be plagued by low gravity, long distances to Earth (leading to communication delays), and further limits down the road, those weaknesses are avoided if the colonies remain truly in space. To that end, Bezos instead suggested people consider taking up residence in O’Neill colonies, a futuristic concept for space settlements first dreamed up decades ago.

"These are very large structures, miles on end, and they hold a million people or more each."

Gerard O’Neill was a physicist from Princeton University who teamed up with NASA in the 1970s on a series of workshops that explored efficient ways for humans to live off-world. Beyond influencing Bezos, his ideas have also deeply affected how many space experts and enthusiasts think about realistic ways of living in space.

"What will space colonies be like?" O'Neill once asked the Space Science Institute he founded. "First of all, there's no point in going out into space if the future that we see there is a sterile future of living in tin cans. We have to be able to recreate, in space, habitats which are as beautiful, as Earth-like, as the loveliest parts of planet Earth — and we can do that."

Of course, neither O'Neill nor anyone since has actually made such a habitat, but in many ways, the concepts he helped developed half a century ago remain some of the most practical options for large-scale and long-term space habitation.

While NASA has mostly focused on exploring the moon and Mars in recent years, O’Neill colonies offer an option untethered to any planetary body. Instead, people would live in enormous circular structures in space that would be capable of hosting many thousands of people — or even millions according to Bezos — on a permanent basis. You may have seen these kinds of colonies in science fiction, from "Star Trek," to the movie "Interstellar."

But in real life, researchers have thought up a a few variations: either a sphere, a cylinder, or a ring-shaped torus. All of these are designed to rotate and create a centrifugal force that mimics gravity for the inhabitants.

While the sizes and specifications of the colonies vary, there are a few staples. In general, O’Neill colonies were designed to be permanent, self-sustaining structures. That means they would use solar power for electrical energy and for growing crops. The outer walls of an O’Neill colony are generally pictured as a transparent material, so that mirrors can aim sunlight through its walls as needed to provide light and energy — or to allow darkness, a feature humans also need, especially while we sleep.

O'Neill thought the only way humans would enjoy living in space is if our colonies were sufficiently Earth-like. (Credit: NASA)

But building these colonies is a challenge beyond any humans have accomplished so far in space, and Bezos acknowledged that. He referred to two "gates" in his announcement, which he clarified as challenges that humans need to overcome. The first, which his company Blue Origin and other space entrepreneurs have been tackling, is to reduce the cost and difficulty of getting to space at all. But the second involves using resources from space, rather than hauling them from Earth.

Bezos isn't alone in such thinking. Most of NASA's long-term plans for the moon and Mars involve rely on harvesting materials and manufacturing products locally, using lunar and martian regolith to build and repair structures. And in the shorter term, three of the dozen experiments NASA selected as the first to fly as part of the new lunar program — possibly even by the end of the year — are what NASA terms "resource prospecting instruments."

That pairs well with O'Neill's vision. These colonies are meant to use resources gathered from space, whether asteroids, the moon, or even Mars. Doing so avoids the costly effort of heaving materials and goods out of Earth’s deep gravity well. That means they would be built using materials available cheaply in space. The humans and their attendant plants and animals would need to be carried from Earth. But raw materials like oxygen, nitrogen and aluminum are plentiful in the solar system, and mining for resources in space is a common theme across space settlement discussions.

The size of O'Neill colonies is such that they could sustain their own farming, both housing humans and providing for their needs without constant shipping from Earth. (Credit: NASA)

Because of their size, the colonies should be able to act as fully independent ecologies, with plants to cycle air and water and resource cycles not so dissimilar from Earth. Humans are a long way from being able to launch anything like an O’Neill colony in the near future. But it’s somewhat telling that, after 50 years of space exploration and technological achievement, one of the modern leaders in private spaceflight is still espousing an idea from the first days of space exploration.