One Time America Thought About Nuking the Moon, and a Few Times Humans Smashed Things Into It Anyway 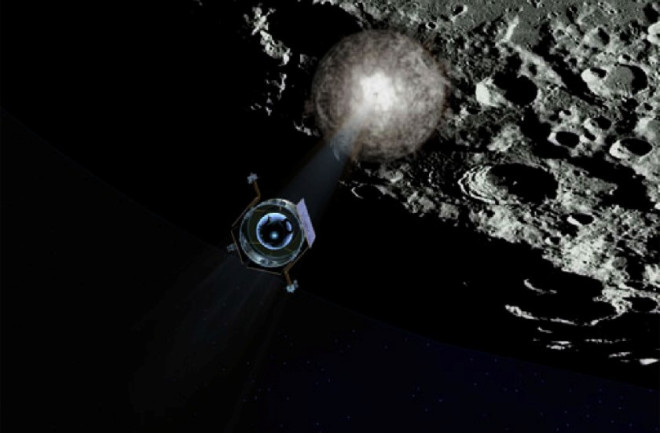 Whether small and scientific or large and ghastly, humans keep finding excuses to crash things into the moon. (Image Credit: NASA)

The 1950s were a bizarre period in American history. An economic boom brought joy to a generation home from war while a strange level of distrust lingered, of enemies both internal and external, in a nation not quite at war, but not quite at peace either. Technology was advancing in leaps and bounds, and the Space Race between the United States and the Soviet Union was underway. To America’s dismay, the Soviets were winning – at least at first.

But before humans set foot on the moon and America relaxed into self-declared victory, the U.S. seriously considered a surprising plan. The military wanted to nuke the moon. In their defense, it was a very tiny nuclear weapon, only a tenth or so the size of bomb America dropped on Hiroshima. And while such an idea seems absurd by today’s standards, the 1950s saw hundreds of nuclear test explosions on Earth by the American, Soviet, and British governments. The moon’s remote location and lack of inhabitants makes it an almost sane choice by comparison. And while the plan never came to fruition, humans have actually blown up the moon’s surface a handful of times.

Crashing into the Moon for Science

NASA's LCROSS mission slammed objects into the moon's surface to see what it was made of. (Image credit: NASA)

NASA’s LCROSS mission slammed objects into the moon’s surface to see what it was made of. (Image credit: NASA)

During the Apollo missions, astronauts detonated a few small explosions. Lunar researchers weren’t sure at the time whether the moon had moonquakes. So, astronauts brought sensing equipment to listen to the moon’s potential rumbles. Listening to reverberations in the moon’s outer layers can tell scientists a lot about what those layers are made of. So astronauts set off test shakes thanks to small explosives. It turns out, the moon does have small quakes on its own, but both real and induced tremors taught researchers about the moon’s hidden depths.

Humans largely left the moon alone for a few decades after that. But in 2008, India launched its first lunar probe, Chandrayaan-1, which successfully reached lunar orbit. Once there, it released a small impactor, the polite research term for an artificial meteoroid they slammed into the moon’s surface. It kicked up a plume of lunar dust, allowing its partner spacecraft still in orbit to investigate the cloud for signs of water.

Not to be outdone in explosions, NASA sent up the LCROSS mission the following year. LCROSS sent its depleted rocket stage plummeting into the moon’s surface, studied the resulting larger plume with a shepherding spacecraft, and then crashed that spacecraft into the moon as well for good measure, monitoring the entire process from above.

This series of impacts taught researchers about water on the moon, which future moon bases will have to rely on. Also, neither mission littered the moon with radioactive debris, unlike, say, a nuclear weapon.

The Plan That (Thankfully) Failed

The report contemplating nuking the moon is available online these days.

The report contemplating nuking the moon is available online these days.

The plan from 1958 didn’t have either of those benefits. Designers conceived the plan largely to boost America’s ego over the space race it was in the midst of losing to the Soviet Union, not for any real scientific value. And it would have definitely contaminated the moon’s surface for future investigations, marring what scientists today see as a wonderfully nearby and nearly pristine record of early solar system history. For both these reasons, as well as fears over what would happen if the weapon’s launch wasn’t successful – an armed warhead falls back toward Earth – the plan was scrapped.

Strangely enough, the Soviet Union may have considered nearly the same nuclear plan, for largely the same reasons: in their case, to prove and maintain their superior stance in space.