On His 135th Birthday, Einstein is Still Full of Surprises

Update: The breathtaking announcement that cosmologists may have found the gravitational fingerprint of the Big Bang adds a lot of support to the theory that the universe began with a runaway phase of expansion known as "inflation." That theory builds on the idea that empty space is full of intense energy fields--an idea that in turn traces its roots back to a factor that Einstein called Lambda in his pioneering cosmological explorations from a century ago. It is one more illustration of Isaac Newton's famous quote about standing "on the shoulders of giants."

You would think by now we would have exhausted the mysteries of Albert Einstein. As perhaps the most famous scientist in history, nearly every idea he expressed and every thing he did has been studied, commented on, written about. Yet on his 135th birthday (born March 14, 1879) there are still new details coming out--details that offer insight both into the workings of Einstein's mind, and into the biggest mysteries of the cosmos. 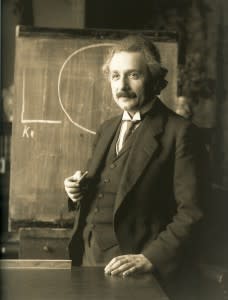