Distant galaxies loom large in the sky, and butt right into our personal space. 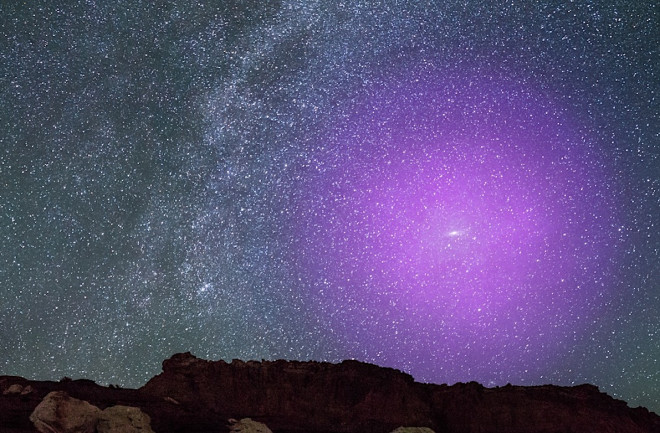 The extended halo of the Andromeda Galaxy would fill a patch of sky more than 60 degrees wide if you could see it with your eyes. (Credit: NASA/ESA/J. DePasquale and E. Wheatley/ Z. Levay)

In about 4 billion years, the Andromeda Galaxy will collide with our galaxy, the Milky Way, unleashing a brilliant burst of star formation. This is not exactly breaking news (assuming anything that will happen billions of years in the future could be considered "news" of any kind). Astronomers have known about the impending collision for decades, many popular stories have discussed it, and a team working with the Hubble Space Telescope even put together pretty illustrations of what the impending conflagration will look like.

But there's an unexpected twist to the story.

Earlier this week, researchers working on a sky-mapping project called AMIGA reported that the early stages of the Andromeda-Milky Way collision will happen long before the main event. You don't have to wait 4 billion years to watch a galaxy smash-up. With a little vision enhancement, you can sense it happening right now... because the Andromeda-Milky Way collision has already begun.

The reason the collision is happening a few billion years ahead of schedule is that the Andromeda Galaxy is much bigger than it appears. The galaxy's bright, starry disk is about 120,000 light years in diameter, making it slightly larger than the Milky Way. In recent years, deep studies of Andromeda using the giant Keck telescopes in Hawaii revealed an extended population of stars that stretched the galaxy's total diameter to about 200,000 light years. That's nothing compared to what the latest study shows, however.

Nicolas Lehner of the University of Notre Dame and his colleagues determined that Andromeda's halo — its outer envelope of extremely thin, hot gas, kind of like a galactic atmosphere — keeps going up to 2 million light years away from its center. The AMIGA team also determined that the halo is divided into two layers, an inner one that is stirred by supernova explosions and an outer one that is much smoother and calmer. In future eons, gas from the halo will slowly rain down onto Andromeda's disk, helping to form future generations of stars.

The Milky Way is similar to Andromeda in size and structure, and our galaxy's halo is almost certainly similar as well. Heart to heart, Andromeda lies 2.5 million light years away from the Milky Way. If each galaxy has a halo that extends 1 to 2 million light years in every direction, then it's inevitable that the two are touching. The great merger is underway.

If you could view the full extent of the Andromeda Galaxy, it would appear shockingly large in the sky. The galaxy's disk appears as a fuzzy smudge about one-quarter of a degree wide (about half the width of the full Moon) to the naked eye, and just slightly larger through binoculars. Long-exposure images taken through telescopes reveal the faint, outer spiral arms that greatly puff up its size to a bit over three degrees across.

Using the light from 43 distant quasars, astronomers were able to map the enormous halo that surrounds the Andromeda Galaxy, and other galaxies like it all across the cosmos. (Credit: NASA/ESA/E. Wheatley)

Andromeda's halo is not directly visible even thorough the biggest telescopes. Lehner had to study it in silhouette, by watching the light from 43 distant quasars shining through different portions of the halo. But if your eyes could pick out the diffuse glow from all of that hot gas bubbling and burbling around Andromeda, it would appear more than 60 degrees wide: Seen in full, the Andromeda Galaxy stretches more than one third of the way across the sky!

Human intuition tells you that distant astronomical objects should appear smaller in the sky than nearby objects do. But intuition tends to be a lousy guide when dealing with the unfamiliar scales and structures of the distant universe. In our solar system, only the Sun, Moon, and the occasional comet have any visible size to the naked eye. The planets are just dots. Put your eye to a telescope and you can expand the planets into small disks, but moons and asteroids remain dots. Move beyond our solar system to look at other stars, and you get... a whole lot more dots.

Go even farther out, though, and things begin to change. As the distance scale increases, the scale of the objects out there increases even faster, so they appear much larger. Our Milky Way galaxy is a dramatic case it point. It is visible as a band of light that circles the entire sky. It's rather strange when you stop to think about it: Even though they are many thousands of light years away, the arms of our galaxy loom much larger above us than any visible structure within our solar system.

The pattern continues as you keep moving away from Earth. The nearest major galaxy cluster is the Virgo Cluster, containing about 1,500 galaxies; it is so vast that it fills the entire constellation that it is named after. The Virgo Cluster is part of a larger gathering, the Virgo Supercluster, that includes our Milky Way. The Virgo Supercluster, in turn, is a subset of an even greater supercluster called Laniakea, one of the largest structures in the known universe.

How big is Laniakea? Even though its central region lies some 250 million light years away, it extends roughly halfway across the sky. "Laniakea" means "immense heaven" in Hawaiian, and they aren't kidding.

To be fair to our puny little corner of the local universe, I should point out that I've been cheating slightly. In our solar system, I've been considering only single objects with a discrete structure (solid, liquid, gas, or plasma), but in the distant universe I've been including the extended environments of galaxies and collections of galaxies. If you apply the same standard to the solar system, things get bigger around here, too.

The dust and ion tails of Comet NEOWISE were easily visible from Earth, even though the comet itself (inset) was so small that even the Hubble Space Telescope could not resolve it. (Credit: NASA/ESA/STScI, Q. Zhang, Z. Levay)

Take, for example, the recent bright Comet NEOWISE. The solid part of the comet is tiny, no more than 5 kilometers wide, but the gas and dust that boiled off the comet — its total environmental footprint — extended a million times farther. In a sense, Earth acts like a comet, too. Our planet's magnetic field creates a cone-shaped disturbance in the solar wind, producing a magnetic tail that can stretch up to 10 million kilometers away from the Sun.

Jupiter is 318 times as massive as Earth, and it has a correspondingly larger and more powerful magnetic field. Side to side, its field extends more than 2 million kilometers from the planet. If the field were visible to the naked eye, it would appear about four times as wide as the full Moon! And that's just the width. Like Earth's field, Jupiter's gets blown outward by the solar wind into a long tail — hundreds of millions of kilometers long, in this case. Jupiter's magnetotail is so enormous that it can extend all the way to the orbit of Saturn. When the two planets line up later this year, Jupiter's tail may wag right into Saturn's face.

Meanwhile, the Sun itself creates a huge bubble of magnetic plasma around it, called the heliosphere; that bubble eventually bumps against the material of the interstellar medium. The outer edge of this bubble, called the heliopause, extends 10 to 20 billion kilometers (give or take) in all directions. Earth and all of the other planets orbit deep within the heliosphere, so you could say that the Sun surrounds us in all directions.

Day or night, every direction points to this outer part of the Sun. There's no escape. Your eyes can't see it, but NASA's IBEX mission can see the solar envelope surrounding us on all sides.

The cosmic microwave background is the biggest thing we can observe in the universe. Or is it the smallest? (Credit: ESA/Planck)

But wait! There is another inescapable cosmic structure that completely surrounds us: the cosmic microwave background, the relic radiation from the Big Bang. In the microwave background, the very small and the very large become one and the same. The radiation is everywhere because every part of space around you (including that part where you happen to be right now) was once a part of the Big Bang.

In this one instance, at least, you might say that the universe is much (much, much, much) smaller than it appears.